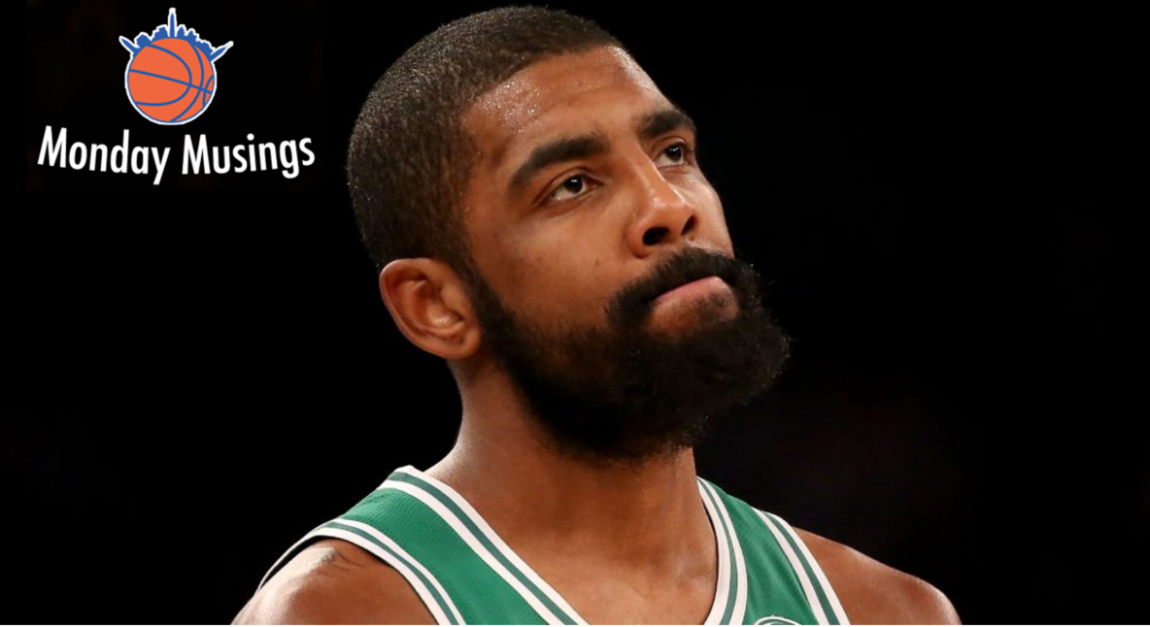 Charlie Zegers expresses skepticism in the reports of Kyrie Irving’s interest in New York—and whether Irving is worth throwing a max contract despite health issues.

The long-simmering Kyrie Irving-to-the-Knicks rumor hit a full boil last week, when A. Sherrod Blakely of NBC Sports Boston told the Bulls Talk podcast that Irving is the Knicks’ “first, second, and third choice” in the 2019 free agent class. I’m here to place a wooden spoon across the top of this metaphorical pot, in the hopes of preventing the whole thing from spilling over and making a great big mess.

(And to torture cooking metaphors, apparently.)

There are a number of reasons to raise an eyebrow at this report, but for starters, let’s consider the source. I have nothing against Blakely. I confess, I’m not terribly familiar with his work. But I can’t help wondering why a Boston reporter would be breaking New York news on a Chicago podcast. Maybe Brown’s MSG source was just trying to send a signal back to Kyrie’s people via a Celtics beat guy. Or maybe the MSG story-leak ecosystem got completely screwed up when the Daily News fired their entire sports department.

Then there’s the sheer hypocrisy of it all. Steve Mills and Scott Perry have stayed on message for the better part of a year—they intend to rebuild their team “the right way.” Patiently. So the idea that they’re already pot-committed to the pursuit of Kyrie, 10 months before any such pursuit can take place?

Either way, I don’t love the idea of Kyrie Irving on the Knicks.

Don’t get me wrong, he’s a remarkable talent when healthy. But “when healthy” is a really important qualifier. Let’s not forget, he missed significant time last season—including the Celtics’ playoff run—due to multiple knee surgeries. Worse, those surgeries were needed to correct problems related to an injury originally suffered back in 2015. An orthopedic surgeon explains all the procedures here, but this is the quick version: he fractured his kneecap, doctors put it back together with wire and screws, the wire and screws caused irritation and were removed, and during that procedure they discovered an infection.

It’s not clear whether or not he’ll ever regain the full strength and durability in that bone.

Maybe Kyrie has an MVP-caliber 2018–19 season. Maybe he leads Boston to the Finals. He’ll still be entering free agency at age 27, as a player whose game is built around his speed and agility and who has an extensive history of serious knee troubles. Committing big, long-term dollars to a player like that is a major gamble. And just to show you I’m consistent, I feel the same way about Kawhi Leonard. He’s a wonderful player, but he just sat out an entire season with a leg injury that nobody seems to understand completely. To me, he’s a “let’s take a flyer on this guy if we can get him at a discount” guy, not a “let’s blow all our cap space” guy.

The parallels between Irving and Amar’e Stoudemire are downright eerie. STAT signed with the Knicks before his age-28 season. He played in 78 games that year, and at a high-enough level that the occasional “MVP” chants at MSG weren’t totally ridiculous. But due to well-documented knee problems, he never came close to that number of games again, and today, at age 35, he’s playing in the BIG3 and talking about a comeback that nobody seems to be taking seriously.

(Full disclosure: I also have a big problem with the whole “Flat Earth” thing. I don’t know if Irving really believes that, or if it’s all just some goof designed to make him seem interesting and quirky. I don’t care. It’s not quirky. It’s not charming. It’s not fun. You don’t get to pick and choose which parts of science you believe. That sort of thinking is what has kids getting measles.)

So who should the Knicks target next summer? I’m all for waiting to decide until next summer.

If Jimmy Butler really wants out of Minnesota, he’d be welcome. But I have no interest in trading assets now for a guy that will be available next summer. (I’m against a repeat of the Amar’e Stoudemire error AND the Carmelo Anthony error.)

Or maybe Kemba Walker—who seems to be backing off his “I can’t see myself in a Knicks jersey” stance—shakes loose.

Or maybe it’s none of the above.