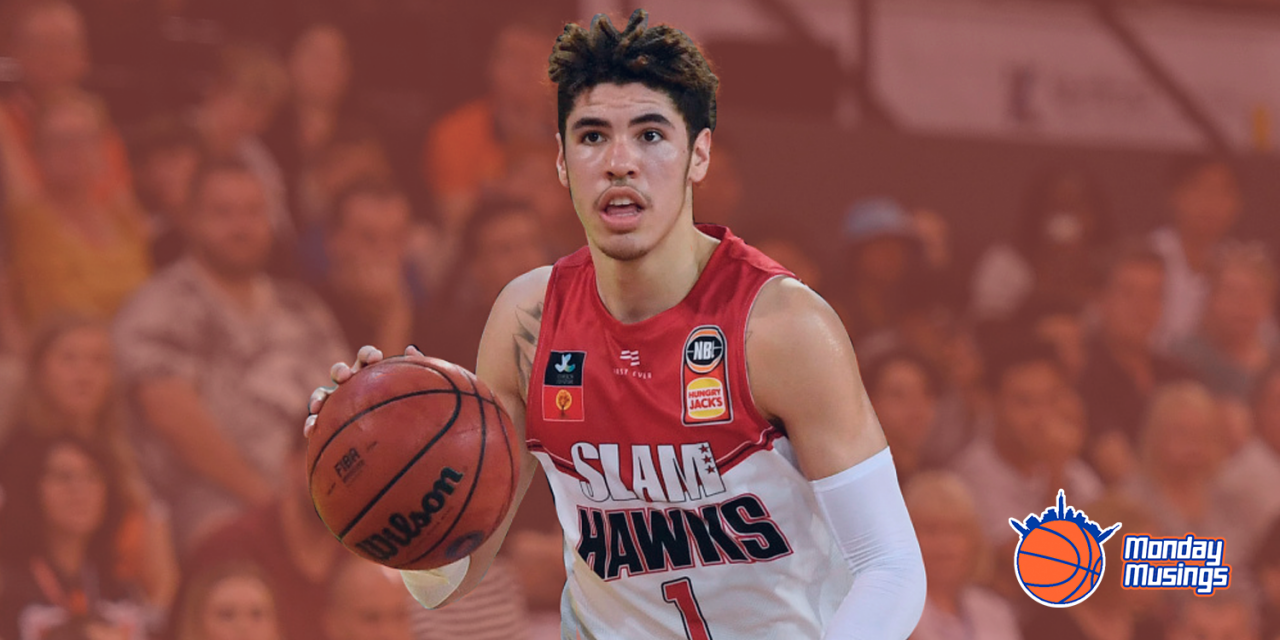 Why is there so much heat around 2020 NBA Draft point guard prospect LaMelo Ball and the New York Knicks? Plus, Charles Oakley speaks and Mark Jackson wants to get involved.

We all thought LaVar Ball was out of his mind when he said his oldest son Lonzo would play for the hometown Los Angeles Lakers. At the time, Lonzo was in the middle of a prolific season at UCLA, while his father was busy speaking his eldest’s future into existence.

LaVar ended up being right about both, and now Knicks fans are hoping he has one last bit of clairvoyance in the tank. LaVar’s youngest, LaMelo, who the Ball patriarch said would end up being the best of the bunch, is a legitimate option for the Knicks in the upcoming draft. LaVar has toned down over the past few years, and is no longer the Rex Ryan–inspired caricature of a helicopter parent he was when Lonzo was preparing to enter the league. But he might have enough magic in his words to create a last bit of divine intervention.

“The best fit, in my eyes, is New York,” Lavar said on Fox Sports’ Undisputed. “The New York Knicks because I know Melo. Melo is a big-city guy. He likes that. He’d love it. So everybody’s talking about the city type of thing. Cleveland, he already lived in Cleveland. He don’t like that cold weather like that—especially if you’re not going to be inside with a lot of bright lights. So I think it’s about time for New York. I kind of feel like they’re going to get the first pick, on the fact that they missed it so many times and it’s time for it to happen to them.”

It’s tough to predict which way the ping pong balls will bounce, but the Knicks might not need the first pick to land LaMelo. Knicks fans would prefer to save that lottery victory for 2021 when Cade Cunningham and Jalen Green are available, and New York has the assets to control who they select in 2020.

“I think there’s one team that I see out there that might be desperate to get up and really make some buzz, and that’s the Knicks,” Ford said. “And if the Knicks don’t get the number one pick in this draft, just given the trajectory of that franchise over the years, I could see them, they have some assets, they’ll still probably have a fairly high lottery pick, packaging all of that together to try to get up to make a big splash. And if there’s a guy that sort of makes sense in New York, it’s LaMelo Ball.”

The fit on paper feels seamless. Off the court LaMelo gives James Dolan a shiny name he can consider an attraction. Since Carmelo Anthony left town the Knicks have never had a true superstar to market. On the court the fit is tantalizing to say the least.

LaMelo is an aesthetically pleasing player to watch when he’s cooking. He has a Trae Young–like passing prowess that can make marginal players look like studs. The wins may take a bit to get there, similar to what is going on with Young in Atlanta right now, but in the immediate future Ball can make the Knicks something they haven’t been in nearly a decade: fun.

A good point guard has long eluded the Knicks, with many given the shot to be the “point guard of the future” but none taking the torch. LaMelo Ball has just the right amount of confidence and skill to take on that challenge.

LaMelo (@MELOD1P) discusses his double behind-the-back AST, vision / instincts. This past season in the #australian @nbl Melo averaged 6.8 ASTS + 2.4 TO in 12 GP for the @illawarahawks. Elite combo of vision/passing

One problem that plagued the Knicks this season was stagnation on offense. A quick remedy is adding a playmaker like Ball, who, as ESPN’s Mike Schmitz describes it, is “always moving guys with your eyes.” If there is any salvaging the poor fit of Julius Randle, Mitchell Robinson, and R.J. Barrett, it’s LaMelo steering the offense, moving them into their hot spots.

A core of Ball, Barrett, and Robinson is enticing on its own. The amount of lobs that LaMelo and Robinson can connect on isn’t calculable. In Barrett he will find a willing shooter to finish off dimes. And then there is Frank Ntilikina, who can be his muscle on the defensive end.

Now, the hard question: how do the Knicks make this happen?

Scott Perry is the key player in accomplishing this. Leon Rose granted Perry at least one more season as general manager, and you have to imagine Perry wants to impress his new boss. Perry has preached acquiring assets and remaining financially flexible for a move such as this. After a season in which he had quite a bit of egg on his face following the slew of free agent missteps and Kristaps Porzingis trade, pulling off a move for Ball can cool Perry’s seat considerably.

The team’s odds of picking first are slim at 9.0%, so it would take some serious luck or a trade. Given how snake-bit the team has been on the luck front, let’s talk trades. An applicable example is the Trae Young and Luka Doncic swap from 2017.

First, the Knicks will need the right dancing partner who wouldn’t take Ball; the Cavaliers and Warriors are two teams that come to mind. The Warriors could afford to trade back and still take Onyeka Okongwu outside the top five. The Cavaliers are a trickier trade partner who could be coaxed with an extra pick or two.

Next would be proper compensation to go along with the pick swap. Perry has a few picks to work with. The extra-first round pick acquired in the Marcus Morris trade, and/or the Mavericks 2021 pick acquired in the Porzingis trade can be used in a deal. If Perry wants to get cheeky he can roll the dice and protect the team’s 2021 first-rounder as the Mavericks did. A lottery protected pick would be a shrewd, but prudent, roll of the dice to land a guy with face-of-the-franchise potential as his ceiling, and a competent floor general for years to come as his floor.

LaVar called it three years ago. Let’s ask for something no one has probably asked him in three years: speak it into existence.

Charles Oakley’s beef with the Knicks remains one of the saddest things associated with the franchise. Oakley has been rightfully cagey with his former team, that tends to happen when you’re given the Jazzy Jeff treatment in the same building he made so many memories in.

Having said that, Oak’s latest comments on Patrick Ewing were a step over the petty line. Oakley had previously called Ewing a difficult teammate, pinned the Knicks’ loss to the Bulls in the 1993 Eastern Conference Finals.

“Patrick, at the end of the game, he’d get double-teamed,’’ Oakley told Marc Berman of the New York Post. “He’d shoot fadeaways on double-teams and that hurt us as a team.”

Ewing is taking the Jay-Z route while Oakley continues to lash out like a spurned Dame Dash, calling Oakley one of his best teammates. Nobody wins when the family feuds, and right now Oakley must feel like a black sheep. Time will heal all, and in time Oakley will get over it and at least apologize to the man who carried the Knicks on his shoulders for 15 years.

For those who thought Mark Jackson to the Knicks was over, guess again. A recent report stated Jackson still has fans in Knicks brass. I think I speak for everyone who roots or cares about the Knicks when I say “no thank you.”

The financial strains put on teams in the coronavirus fallout could help the Knicks acquire Chris Paul. CP3 has become a buzzword among fans lately, and the possibility of acquiring the Point God could become a reality if the Knicks don’t have to include Ntilikina or Kevin Knox.

Landing Paul without parting with any significant assets (and yes that includes Knox in this case) was the only way the deal made sense. If the Thunder want to shed space, offloading Paul’s remaining $85.5 million (assuming Paul picks up his player option) for expirings carries more urgency than stalling for a contender to make a move. 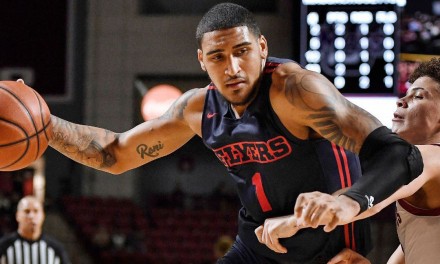 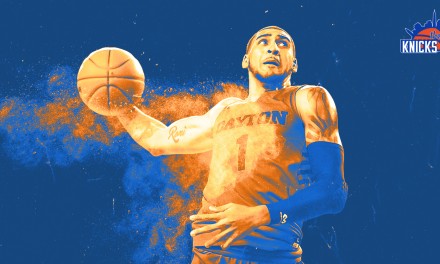