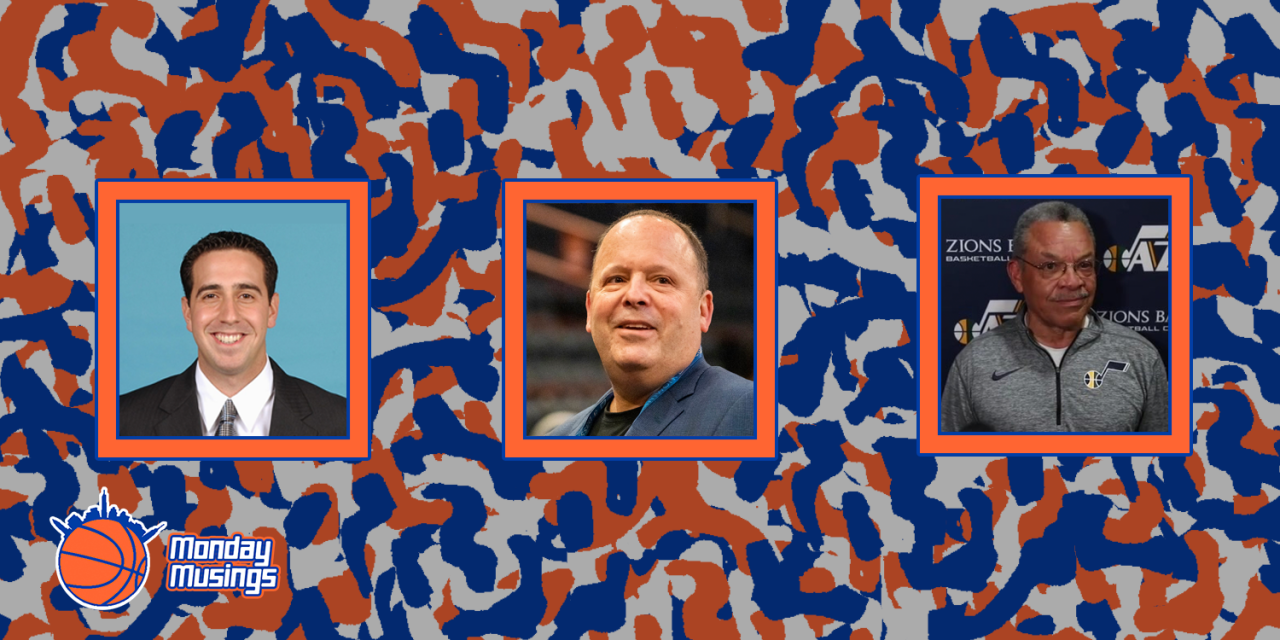 Over the past week, Leon Rose has assembled new faces in the Knicks’ front office, including poaching talent scouts from several organizations.

Leon Rose must have caught wind that the NBA season was close to returning, because last week he handled a ton of family business. Rose has stayed away from making major changes; current general manager Scott Perry will stick around for at least one more season, and there has been no word on a head coaching change as of yet. Instead, Rose fixed his focus on complementary pieces.

New faces at Madison Square Garden have been a common theme in all the Knicks’ hapless years. Head coaches and players have cycled through, but the front office largely stayed the same. Rose has changed that and also insulated his current GM with assistants that strengthen Perry’s weaknesses.

Perry has been an average GM, and two reasons for his mediocrity are poor showings in free agency and drafting. In free agency, Perry has relied on players he was familiar with in previous jobs, while his draft history isn’t as impressive as many believe it to be. R.J. Barrett was a no-brainer, and while Mitchell Robinson was his saving grace, the Kevin Knox selection looks suspect in hindsight.

That is why the hiring of Perrin was such a massive get. With the current climate there is no certainty that a combine will even happen. Teams will have to rely on their scouting departments no more than ever, and the word on Perrin is that he is a road warrior.

This clip exemplifies how thorough Perrin is. He rattles off nuggets on a wide variety of prospects in just 15 minutes.

Perrin also has a history with Perry; the two worked together in Detroit during the Pistons’ last good years. That familiarity should equate to early trust in Perrin, as if Perrin’s work doesn’t speak for itself. Perrin played a major role in the Jazz landing Donovan Mitchell. Knicks fans should hope that Perrin’s persistence can yield similar results.

Aller and Frank Zanin will help address Perry’s struggles in free agency. Think of Aller as the bank and brain. He was the first person Rose brought in, and for good reason—he is a forward thinking mind who will change the stale approach the Knicks have had over the years. “What makes Brock unique is that he always thinks outside the box,” an NBA executive told Chris Fedor of cleveland.com. Aller is also extremely thorough in his work, a main reason Cavs owner Dan Gilbert called him one of the best capologists in the league. Aller could very well be the one being groomed to replace Perry long term, but in the short term he can start developing creative ways to return the Knicks to relevance.

Lastly, Frank Zanin was most recently an advance scout for OKC. He was a pro scout in the Brooklyn Nets’ front office prior to Sean Marks taking over. Zanin’s focus will be on pro scouting, hopefully helping Perry avoid failed draft picks from past stops and zone in on players that fit on the floor together.

This is encouraging recruiting by Leon Rose, who was hired for his connections. He has taken an approach the team has refused to take on the floor: building a village instead of waiting for the messiah.

Rose has done in a few weeks what Phil Jackson failed to do, and what Steve Mills was simply incapable of: implementing changes from the top. By trimming the fat off Perry’s staff and infusing it with legitimately good minds, the Knicks can start to change that culture they have been talking about for the last few years.

It is always going to be “wait and see” with the Knicks, but Rose has at the very least earned our attention. It’s smart for Leon Rose to hold off on major hires in key spots like GM and head coach until we are out of this weird COVID-19 world.

For the first time in a long time I am intrigued by what the Knicks will do in the draft and free agency, and Knicks fans should be too.

Head of the Class

Let the LaMelo Ball saga begin. A few weeks back it was reported that LaMelo Ball’s camp would steer him towards the Knicks. It appears the Knicks share a mutual attraction.

Ball is the top guard on the team’s draft board (and second on TKW’s) and would be a solid fit in New York, mainly because the Knicks have had as much luck finding a mainstay at point guard as Adam Schefter has had finding something new to report. The only caution that comes with this news is making sure the team does not overplay their hand and part with assets to make sure Ball is a Knick.

New York Governor Andrew Cuomo announced that teams could reopen training camps in New York on Sunday. This coincides with NBA teams recalling players on June 1st and the league being in talks to resume the season in mid-July at Disney World in Orlando.

The Knicks and Nets have not opened up yet, but that will likely change in a few weeks. What is still up for debate is whether Knicks basketball will be back. The Nets will almost certainly resume playing since they are in the playoffs. For teams like the Knicks with nothing to play for, it doesn’t make a whole lot of sense to play until next season.

Prayers Up for Pat

The coronavirus is still wreaking havoc on the country and does not discriminate in terms of who it attacks. Knick legend Patrick Ewing recently tested positive and is isolated in a hospital.

We wish nothing but a speedy recovery for Ewing, a special person to Knicks fans and hoops fans alike.