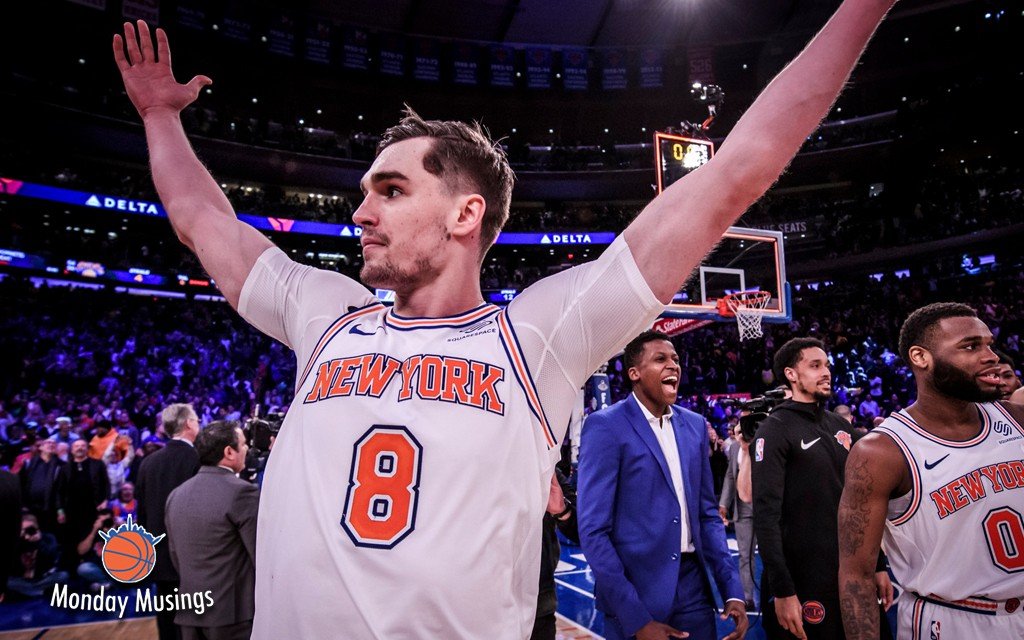 This week’s Monday Musings has Charlie Zegers discuss Mario Hezonja’s highlight block on LeBron James and the pitiful Lakers’ visit to the Garden.

Charlie Zegers: Yesterday’s game against the Lakers should be included in textbooks as a lesson on the subtleties of tanking.

Neither team was very good. Neither team played with much urgency or cohesion—for the first 44 minutes or so. (An aside: wouldn’t you love to see a detailed breakdown on the efficiency of NBA players in afternoon games in New York, Los Angeles, Atlanta, or Miami?) LeBron was LeBron, and even a listless, disinterested LeBron was enough to put the Lakers up big.

The Knicks continued to play hard and went on an unlikely late-game run. Kentavious Caldwell-Pope committed one of the dumber fouls you’ll ever see, putting Emmanuel Mudiay on the line with a chance to take the lead. Mud sank both, giving New York a one-point lead and setting up the inevitable game-winner from LeBron.

And then, the unthinkable.

LeBron gets the ball, Mario Hezonja shadowing. LBJ fakes, takes a 13-footer from the baseline for the win.

And Hezonja eats his lunch.

I mean, that wasn’t just a block. That was a “dad gets tired of letting his son score and slaps one away just to make a statement” sort of block. On the greatest player of this generation. From a guy who had been stapled to the bench for weeks.

So, yeah. The Knicks aren’t good. And that’s at least partly by design. But the players on the floor are trying to win these games.

I’m happy for Mario Hezonja, who cemented his place on the 2018–19 Knicks highlight reel with that play.

I imagine Enes Kanter and Noah Vonleh had similar expectations heading into this season.

Things haven’t really worked out that way for Hezonja, who’s been out of the rotation since Valentine’s Day and whose season—with the exception of one highlight dunk and yesterday’s rejection of The King—has been rather forgettable. But to his credit, Hezonja has been a total pro. He’s been ready to play when called upon. He hasn’t complained about playing time. In fact, he repeatedly admonished Kanter to stop sulking.

Maybe it never really “happens” for Hezonja. Maybe he won’t get a big free agent deal this summer. But maybe he’s shown enough to stick around in this league for a few more years. And maybe that’s not the worst thing in the world.

The Return of the King

Speaking of seasons that haven’t exactly turned out as planned.

It’s hard to take shots at a guy who scored 33 points, but LeBron just fell apart in the fourth quarter yesterday. He missed eleven shots in the final 12 minutes, posting the worst shooting quarter of his NBA career.

I admire his willingness to play out the string, even though the Lakers are very clearly in “sim to end” mode. One of my friends took her son to that game—the kid got to see LeBron play. That’s special. And it’s a testament to his overwhelming talent that he could look so disinterested, post the worst shooting quarter of his career, and still finish with 33 points.

The Lakers are going to have a very different look next year, but I’ll be shocked if they’re not back in the mix for a top-four seed in the West.