Monday Musings: Michael Porter Jr. Was Never Going to Be a Knick 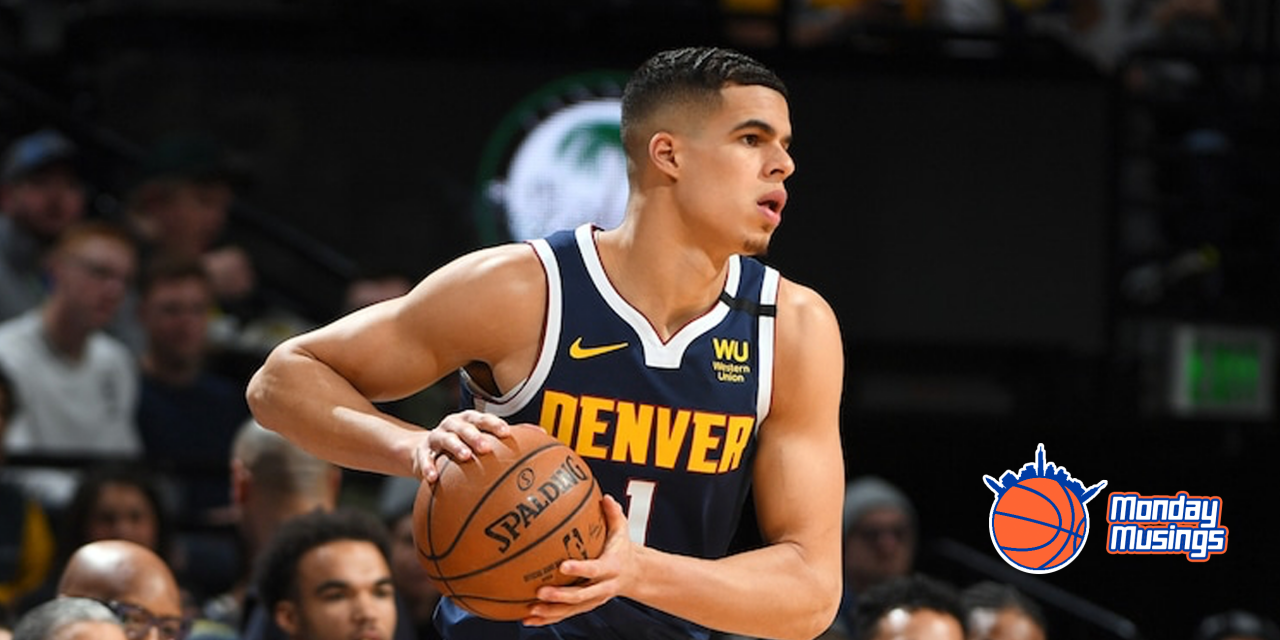 Much has been made about the Knicks not taking Michael Porter Jr. in the 2018 NBA Draft. A closer inspection of the timeline explains why.

An idle brain is the devil’s workshop and 2020, also known as the Year of the Quarantine, has given us an abundance of idle time. That free time has been supplanted by the return of basketball, mercifully. But with basketball now back in some fashion, it has now given us time to do a lot of revisionist history, and worse, time to relive some of the seminal moments in recent franchise history and reform opinions.

The NBA bubble has not included the New York Knicks in any fashion; however, they have remained in basketball conversations—because, I mean, what is the return of basketball without endless Knicks slander?

There are a few reasons for the Knicks to come up: Carmelo Anthony returning to form for a red-hot Portland Trail Blazers team. Kristaps Porzingis and Tim Hardaway Jr. playing great for the playoff-bound Dallas Mavericks (not to mention Trey Burke having his moments as well). And lastly, Michael Porter Jr. and Mikal Bridges playing noticeably better.

The Michael Porter Jr. jokes are where a line must be drawn. The 2018 draft has become an inflection point of revisionist history. Porter has looked like a former top pick and his breakout has somehow become the butt of numerous Knicks jokes.

By now most should have accepted that Kevin Knox was indeed the worst option at ninth overall in the 2018 draft. But who the Knicks were also considering at no. 9 and who they passed on has been lost in the mix of fuego takes.

Let’s take a look at what the plan was for 2018, what happened, what should’ve happened, and most importantly, why Porter was never going to be a Knick.

Immediately following the draft lottery, in which the Knicks landed the ninth overall pick, the team tweeted a message out from Scott Perry. The message? Best player available.

“We’re going to pick the best available player.” – GM Scott Perry with a few words for the fans ? pic.twitter.com/jSu356cvJY

The group of players linked to the Knicks were Miles and Mikal Bridges, Knox, Michael Porter Jr., Wendell Carter Jr., and Collin Sexton. You will notice that Shai Gilgeous-Alexander is not in this mix. There was no doubt SGA was the best Kentucky player in the draft, but the team had already tipped their hand as to the position they were targeting: the wing.

A week prior to the lottery Steve Mills said this:

“We need talent, we need athletic players and the position will determine who we pick but in an ideal world, we’d like to get a wing player,” Mills said.

What that meant to us at the time is that Miles or Mikal would be the frontrunners with Sexton, Carter, or Porter lingering if they fell. That thinking held true in the lead up to draft night.

As the draft got closer names like Trae Young and Mo Bamba became targets of trade-ups. Young was the best player in college so the chance of him slipping to nine was slim, but there was some mutual interest there. Bamba was another player the team was rumored to like enough to consider trading up to fourth overall to select.

Members of the Knicks organization met in-person with Texas’ Mohamed Bamba in New York today, team sources told ESPN. The meeting is an indication that the Knicks are considering trading up from the No. 9 pick. Bamba is projected as the fifth pick in ESPN's latest mock draft.

Thankfully that did not happen, but in hindsight, why the hell was a trade up for Luka Doncic never considered?

Doncic is not only an Anthony replacement, he had an existing relationship with Porzingis and Willy Hernangómez. How do they at least not kick the tires on securing Luka, who reportedly had no plans to play in Sacramento. I’ll give Mills and Perry the benefit of the doubt here and assume the price to move up for Doncic, Young, or Bamba was too expensive, leaving the Bridges and Knox as the likeliest candidates.

Now, about Porter—the talent was never in question. Prior to his back injury and college Porter was a projected top pick in his class. Injuries and a lost year at Missouri changed that, but the argument for Porter going to the Knicks was always with the caveat he would miss his rookie season. The Knicks wanted to turn the corner sooner rather than later so Porter was never given much of a consideration.

The moment Knox became the front-runner was following a workout in which he reportedly dominated Miles Bridges.

Knicks had Miles Bridges & Kevin Knox compete against one another on Saturday, per people briefed on the workout. That’s what you’d expect in a group workout but it’s interesting that Knicks would want to see those 2 together as both will likely be available when they pick at 9. https://t.co/5DwlQfRdve

“He gave himself an A-minus,’’ Knox Sr. told the New York Post following the workout. “He said he had a lot of energy, was bouncing off the walls. [Coach David] Fizdale came over and showed support. It was a three-on-three. I heard he got the better of Miles, knocked down shots, put it on the floor — Paul George-ish.’’

The Knox whispers grew louder to the eve of draft night.

There was no trade to move up. Every other prospect the Knicks had eyes on went in proceeding order, starting with Young at fifth overall. That left Knox, Miles and Mikal at nine. Porter was there for the taking, but the injury history and fan outrage likely played a larger role in the front office sticking with a player who could play right away.

Gilgeous-Alexander was also there, but as stated earlier, wing was the priority in the draft despite Perry proclaiming “best player available.” In the end Fizdale, who would go on to prove he does not have the keenest eye for true talent, won out.

In hindsight, Miles or Mikal always made the most sense. Mikal in particular with his clear 3-and-D mold would have been a nice fit with the defensive-minded Frank Ntilikina and rim protector Porzingis.

The outside-the-box pick would have been Porter, and there was an argument to be had for punting one more season. Had the Knicks pulled the trigger on Porter there would have been legitimate public outrage. There is nothing James Dolan and company hate more than a poor headline, and an injury-riddled pick would not have played well, especially with Porzingis likely not playing in the upcoming season following an ACL tear.

But it is hard to not look back and see that the Knicks could have still ended up in the top five in 2019, with Porter and Porzingis waiting in the wings. Still, for fans that laugh at the Knicks for not taking Porter would be the same fans who would laugh had they taken Porter.

So, if you want to get mad about the Knox pick, please be mad at the right misses: Gilgeous-Alexander, Mikal Bridges, and Miles Bridges. And not because they are better players—that is unfair to Knox. It is because the Knicks consciously took a project pick for the second straight draft with no desire to develop it.

This type of impatience would doom Mills and Perry a few months following the Knox when they made the worst trade in franchise history. We’ve talked enough about why the Porzingis trade was a nightmare.

A new wrinkle to the aftermath of that horrific trade was that the Knicks were actually on the right track. Watching Porzingis thrive as a second option and Hardaway as a tertiary, it is clear the team just needed the top guy. This is why not waiting until the offseason for any move will always sting.

Hardaway Sr. recently said the Mavericks were interested in his son when the Knicks added Porzingis into the deal. If true, that only makes pulling the trigger in January as opposed to the summer even worse. Hardaway’s deal would have been less cumbersome to move, and Porzingis was under club control one way or another.

But that is all in the past. Let’s move on, but when we do decide to look back, just please, look back correctly: the Knicks may have whiffed on Knox, but Michael Porter Jr. was never going to be a Knick.

Tom Thibodeau’s staff has yet to be filled out. Mike Woodson and Mike Miller are expected to join, and now we have another name, Kenny Payne. The longtime University of Kentucky assistant coach is currently John Calipari’s associate head coach, but is mulling an offer to join Leon Rose’s regime in New York, according to the Post.

“All I can say is it’s not an easy decision,” Payne said. “And, hopefully, it gets resolved one way or the other here soon.”

Payne has been at Kentucky since 2010 and his son, Zan, is a walk-on for the team. It would be tough to leave such a successful operation for the turbulent terrain of the Garden. If Payne were to come he could help with Knox’s development and possibly be another familiar face to lure a Kentucky alum.

Kemba Walker was recently a guest on C.C. Sabathia and Ryan Ruocco’s R2C2 podcast, and dropped an interesting little nugget when talking about free agency.

Was there ever a chance @KembaWalker would play for the Knicks?

When asked by Rucco if the Knicks were a serious consideration Kemba had this to say:

Nothing like another veiled reference at the legitimacy of Kevin Durant coming to the Knicks to get the depression going.

»READ: 2018 draft re-do: what do the Knicks look like if they never drafted Kevin Knox?

»READ: Recapping the demise of the Steve Mills and Scott Perry Knicks era