Monday Musings: The NBA May Be Back, But Not the Knicks 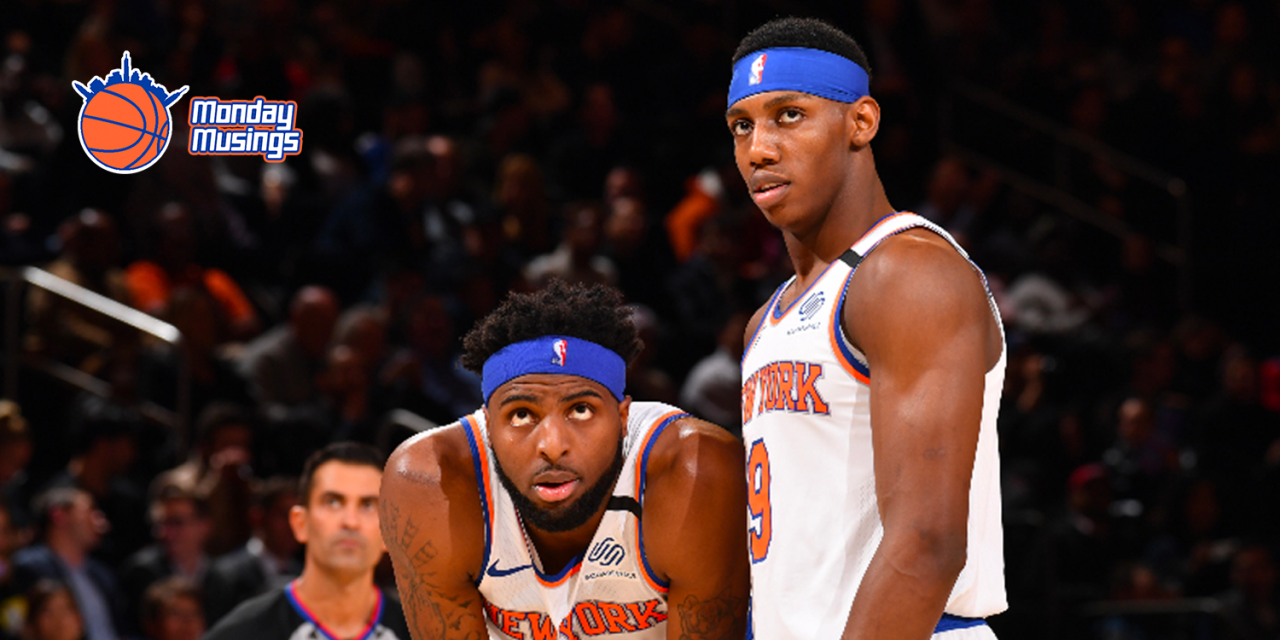 The NBA will, in all likelihood, resume its season in the coming months, but it appears the Knicks are on the outside looking in.

We’re not going to Disney World. The NBA is preparing for a return to play and the New York Knicks in all likelihood won’t make the cut. If and when play resumes, the likeliest scenario is 20 teams return—16 current playoff teams and four teams that were still in the mix before play stopped. That would mean the Knicks are done for the summer, and our last memory of the 2019–20 team was a 136-131 overtime win over the Atlanta Hawks.

Let’s break the fourth wall here, so to speak—the last few days have absolutely sucked and have been filled with way too much negativity. The last thing I’m sure anyone wants to read is about why the Knicks not playing basketball would be a good thing. We need something positive to chew on, something to laugh at.

Having said that, these are the following reasons you should want Knicks basketball to resume this season. The argument against watching the Knicks again this season are widely understood—it heightens the chance of the team ruining their lottery odds, people do not want to see Elfrid Payton and Julius Randle’s two-man game, and folks really want LaMelo Ball on the team before they see them again.

But what about the reasons why? That is what you come to places like The Knicks Wall for. So here are my reasons for wanting to see our guys again this season.

It has been so long since the season stopped, almost three months, so I can’t fault folks too much in forgetting that Frank Ntilikina had his first 20-point game and the world literally lost its balance.

Frankie finished with 20 points (on nine shots), 10 assists and a pair of steals, but beyond the raw numbers it felt like Ntilikina was finally trusting his game. The hesitations in his shot attempts slowly dissipated leading up to that game, but for those who followed the team closely, the newfound aggressiveness didn’t feel like an aberration but a player starting to take his shape.

Ntilikina is firmly grounded as a core player now; even Leon Rose wants to keep him. I will not blow smoke and say Ntilikina will be a star, but this season he has unquestionably proved what many of his loyal supporters have said all along—he’s got game.

Another beautiful thing that started to develop this season was Ntilikina’s chemistry with R.J. Barrett. The future of the Knicks absolutely involves Barrett, and being able to not only coexist with him but thrive with him will keep you in the good graces of the coaches and front office. But Ntilikina and Mitchell Robinson are not enough. The Knicks will need more and Barrett might have to take the initiative.

The sticking point in bringing Leon Rose’s regime in was to make the Knicks a destination for players again. At some point Barrett will have to lend a helping hand in this process.

Zion Williamson is the first name that comes to mind, and rightfully so: the two thrived in Duke and New Orleans is not exactly popular for keeping its star players. If Barrett is going to fulfill his destiny as Dwyane Wade 2.0 he is going to have to plant the seed early, like Wade did with LeBron years ago. Being with Williamson on a consistent basis again, which would happen if the Knicks and Pelicans were both going to Disney World, would allow Barrett to enlighten his friend on what they could do in New York.

Just a reminder, RJ Barrett had a game-high 27 points last night in the Rising Stars Game.

Oh, and made a new friend named Luka ? pic.twitter.com/YrsJDWm6AB

What a perfect opportunity it would have been for Barrett who would have been in the same place as Williamson, and others, for an extended period of time. Well, at least Barrett has time to work on Zion, and if Ball lands in New York maybe a few Pelicans will fly north.

A man can dream can’t he?

The last, and perhaps best, piece to the current team’s inner core: Mitchell freaking Robinson. Even with limited playing time compared to the minutes he should have received Robinson left an imprint on the game.

MITCHELL ROBINSON SAID BLOCKS ARE TOO EASY I’M GONNA GET A COUPLE STEALS A NIGHT TOO pic.twitter.com/3syvzTDqlO

And it looks like those are just the tips of the iceberg of Robinson’s potential.

good morning, just a reminder that Mitchell Robinson is a beast.pic.twitter.com/72s3NbOn9L

There is a new iteration of Robinson coming but the current version is pretty damn good too. Assuming the Knicks are done for the year, Robinson will finish with the highest-recorded field goal percentage in league history, 74.2%, besting Wilt Chamberlain’s 72.7% in 1972–73.

With news that Bobby Portis is on his way out there is not much blocking Robinson from 30-plus minutes a game, and as he has proven in limited time, if he is on the floor good things will happen.

Two names ominously missing in the team’s inner core are Dennis Smith Jr. and Kevin Knox. Neither player had a season to remember. In fact, both had the type of season you want to forget never happened.

Smith’s season started off with a back injury that robbed him of preseason reps and a chance to win the starting point guard job, something the team clearly needed to save face on the Kristaps Porzingis trade. That didn’t happen as a series of misfortune and a genuinely baffling deterioration of confidence left Smith looking like a bust.

No one needed a break more than DSJ to reset. If there were some games for him to try and get some sort of momentum instead of ending what could be his brief Knicks career averaging 5.5 points per game. And who doesn’t love a good comeback story? My worry is if and when Smith has one it will not be in New York.

Knox is not looking for a comeback story but just a story. He too had a season you pray you forget. Knox’s minutes and productions were slashed clean in half like Darth Maul. Knox’s lost season can be attributed to the slew of veterans signed, a vast majority overlapping, forcing Fizdale to make the bizarre decision to start Knox at the 2.

Leon Rose doesn’t know what to make of the soon-to-be third year wing and neither does anyone else. What we know about Knox is he will put in the gym time and has promise as a floor-stretching shooter. But how does that translate to being an integral part of the rotation? That is what Knox still has left to prove if he wants to remain within the team’s future.

Head of the Bench

Let the search begin. With front office business settled the Knicks will shift their focus to the head coaching vacancy. Tom Thibodeau is the top candidate and early favorite, which should not come as a surprise to anyone. Thibodeau has long been the only name connected to the vacancy, but he is no longer the only candidate.

Kenny Atkinson will finally get his interview, according to Mike Vorkunov of The Athletic. My preference for Atkinson is noted so I won’t take up anymore time, but I will say this: Atkinson fits the team’s timeline much better than Thibs.

The Bobby Portis experience had its moments, but it has mercifully come to an end. It was no fault of Portis’, he actually proved to be the type of player the team should have backup Robinson. Portis’ problem was he was way too trigger happy on offense and gun shy on defense.

If sources serve us right the team will not pick up his $15.7 million option, per Ian Begley in SNY. Portis’ shining moment came early in the season when he led a comeback victory over his former team, the Bulls.

Portis had a penchant for having good games against his former teams (Bulls and Wizards), so brace yourself now for the random 25-point explosion when he faces the Knicks next season.

Despite the season being unofficially but officially over, the Knicks reopened their practice facility in Tarrytown for voluntary workouts Friday.

This allows the team to still get back in the groove of things after the sudden shutdown as they look ahead to next season.

»READ: What to do with Reggie Bullock, Wayne Ellington and the Knicks’ need for outside shooting