Monday Musings: Is the Nets’ Rebuild Outpacing the Knicks’? 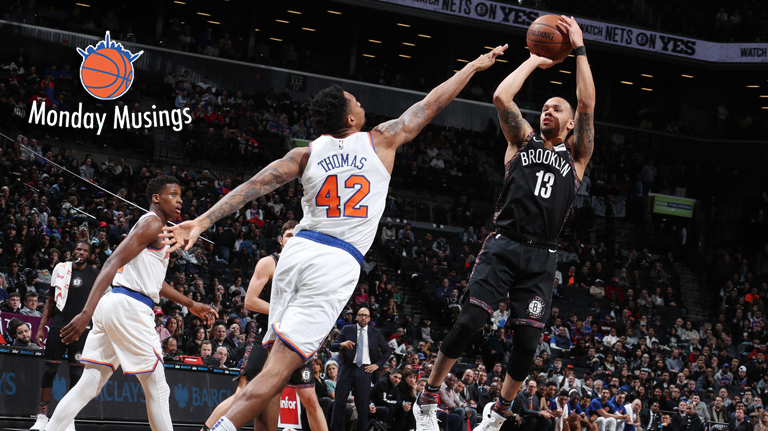 Bryan and Charlie discuss a brewing Knicks-Nets crosstown rivalry and the state of their respective rebuilds on Monday Musings.

Bryan Gibberman: Knicks versus Nets hasn’t been something anyone outside of the fans of the two franchises has cared about in a very long time. The last time both teams were good in the same season was 2012–13.

Where’s your mind at with the organizations?

Charlie Zegers: We saw an awful lot of Knicks/Nets comparisons this week. Makes sense, I suppose…especially with the Nets playing so well and the Knicks…playing like the Knicks.

Look—I’m terribly impressed by what the Nets have done this season. Sean Marks has built an interesting roster and landed a couple really nice players. Kenny Atkinson has them playing excellent ball. D’Angelo Russell has turned his career around. Spencer Dinwiddie deserves every cent of that fat contract he just signed. I really like Jarrett Allen’s game. Rodions Kurucs is a keeper. And they’re doing this without Caris LeVert, who might be their best player overall.

But let’s not lose sight of the fact that they’re in year three of their rebuild. And they got to go through what the Knicks are going through now in relative anonymity.

As far as I’m concerned, the clock on the Knicks’ rebuild started last summer. The core of the team—let’s call it Frank Ntilikina, Kevin Knox, Mitchell Robinson, Allonzo Trier and, of course, Kristaps Porzingis—has yet to play even one minute together. So if we want to really compare rebuilds, it’s only fair to look at the 2018–19 Knicks with the Nets from two seasons ago.

Now, I have no idea if Scott Perry will be as good as Marks, or if David Fizdale will become the coach that Atkinson seems to be. I’m just hoping they’ll be given enough time to really develop something.

Bryan: The Porzingis factor is the most thought-provoking part of this activity. As good as LeVert was this season, he’s still never had the type of individual impact impact KP has. If Porzingis is around, how much different are we viewing the Knicks right now?

Would Porzingis and Frank continued their small sample size success from last season playing together?

Would Fizdale playing KP at the 5 bring the Knicks offense to a level we didn’t know it had?
Is the Robinson/Porzingis tandem an awkward fit because neither can defend on the perimeter and they both struggle on defensive rebounds, or is it a dominant defensive duo that protects the rim, comparable to any other duo in the entire league?
There are so many questions that have gone unanswered that we won’t know until whenever Porzingis is back.
Charlie: There are enough “what ifs” attached to Porzingis and his injury to keep us in column topics for months, possibly years.
And then there’s the biggest question: is the presence of a healthy KP enough to convince another all-star caliber free agent to sign with the Knicks?
The other big question: where do the Nets go from here? Is Brooklyn going to be a free agent destination? If not, how does that team continue to improve? Because a core of Russell (assuming he stays) and Allen and Dinwiddie and LeVert is only going to get you so far.