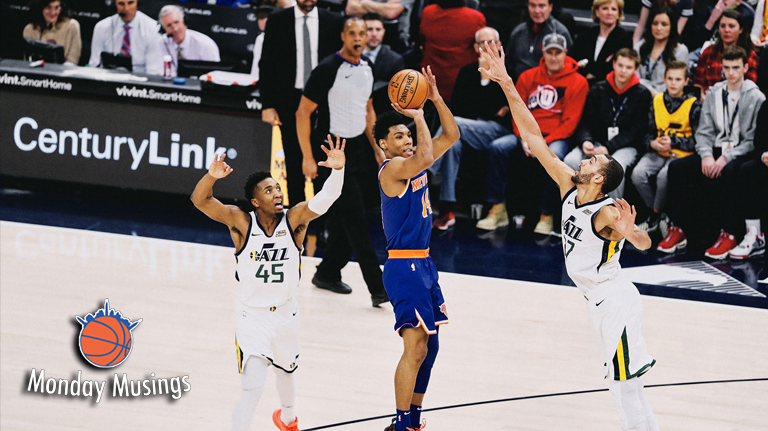 Charlie and Bryan offer some resolutions for the incoming New Year, including citing moves from the Knicks to stick to the youth movement.

Charlie Zegers: I didn’t watch the debacle in Utah.

I was up in Connecticut, near the awkward New York/Boston sports fan dividing line, at a house that gets YES and NESN but not MSG. So instead of the Knicks and Jazz, I wound up watching St. John’s and Seton Hall. (The Johnnies got robbed and should still be undefeated, but that’s for a different column.)

I’m not sorry I missed the game. In fact, I’m sort of glad. I mean, I feel like I go into each game with appropriate expectations. I want to watch the kids play. I want to see progress, especially from Kevin Knox, Mitchell Robinson, Frank Ntilikina, Damyean Dotson, and Allonzo Trier—the guys I imagine will be part of the core next season and beyond. And I even like watching Emmanuel Mudiay and Noah Vonleh show off the talent that made them lottery picks; I’m rooting for them to land nice contracts this summer.

But there’s only so much bad basketball I can watch without making myself crazy.

I’m not a big resolution guy, but there’s mine, as a Knicks fan. I will continue to follow the team’s progress. I will continue to root for them—both on a day-to-day basis and for their long-term development. But I’m not going to make myself crazy, living and dying with each possession, each Tim Hardaway Jr. heave, each Enes Kanter blown assignment, each Mario Hezonja…doing whatever the hell it is he does.

I have a singular New Year’s Resolution for the Knicks the rest of this season—make defense your singular priority.

That’s it, and David Fizdale needs to be the one to implement this ethos. To this point, Fizdale has joined a long line of Knicks’ coaches who put word service on making the team’s identity being defense and not following through.

No more BS zone to cover up for others, no more Enes Kanter playing without being held accountable, no more letting Jazz guards break down your defense unimpeded without consequence.

Defense, defense, and defense is all I want from the Knicks in 2019.

I’ve long quit on this team being decent. I had hoped for 25-30 wins so they could be a normal bad team, but I’ve accepted that’s not happening.

The Daily News‘ Stefan Bondy’s report that Kanter, Lance Thomas, and Courtney Lee are going to be minimized is a step in the right direction.

Enes is not the only player being alienated by tank job. According to sources Lance Thomas and Courtney Lee were also told while ago that the organization was prioritizing “development”

Just let the kids play and see what happens. That’s all I’ve wanted from this season for the most part. I can take solace in the Knicks choosing to travel down that path.

Charlie: Oh, I gave up on decent a long time ago. I’d settle for “entertaining, with the occasional glimpse of good things to come.”

They started the season entertaining – and mostly competitive, too. They’d fall behind early, go on a run to tighten things up, and then lose by 10 or 12. And we’d watch and say, “With Porzingis on the floor, that’s a W.”

I’d sign up for more of that in a heartbeat.

The Knicks have collapsed ever since Fizdale yanked the Mitch, Vonleh, Dot, Tim & Frank starting lineup that was playing well together cause they had a bad 3 minutes together in the Magic game & went with groups filled with bad defenders https://t.co/BjDbV8DlPc

I agree with that point 100 percent. Things really went off the rails for this team when Fizdale swapped the “more veteran” group into the starting lineup. (I’m using air quotes because the Kanter/Mudiay/Hezonja/Vonleh group is still just barely old enough to buy beer.) Aside from being horrific defensively, that group (plus Hardaway) has a nasty tendency to fall into iso-heavy ball. I’m not against isolation play in general, but it works a lot better when James Harden and Chris Paul are initiating.

If I may be so bold, I’ll humbly suggest a resolution for Mr. Fizdale and his bosses:

Take a longer view. Focus on the guys who are most likely to be here when the team turns a corner.