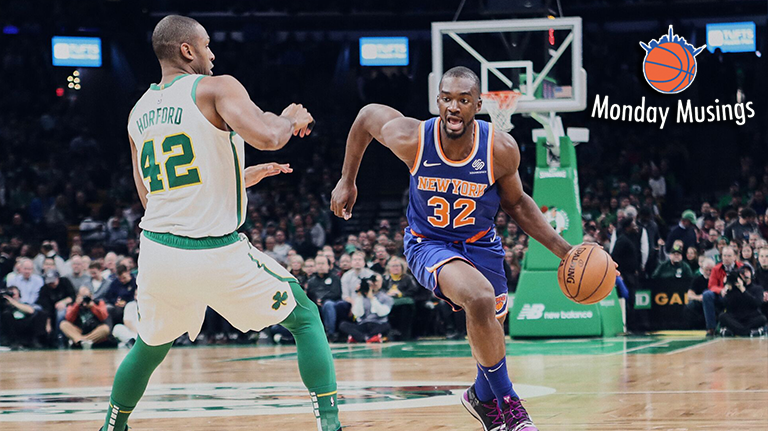 Noah Vonleh is the Knicks’ most “complete” player in coach David Fizdale’s eyes. Why is the journeyman former lottery pick so invaluable to this team?

Bryan Gibberman: The New York Knicks’ winning streak reached three games when they grinded out a 103-98 win at the Memphis Grizzlies on Sunday night.

One of New York’s catalysts continues to be 23-year-old big man Noah Vonleh. It was just last week that Fizdale had this to say about Vonleh’s emergence:

“I would say he’s probably overall our most complete player,” Fizdale declared.

Vonleh is absolutely getting it done across the board while averaging what would be a career high 25.2 minutes per game. His current averages of 8.3 points, 8.4 rebounds, and just under two assists per game don’t do justice to the impact he’s having.

Noah Vonleh has been quite good pic.twitter.com/4aQDJTlwIQ

The raw numbers are taking a boost during the three-game winning streak, but his defense has been just as important as the offense to the Knicks’ recent success. He’s defending multiple positions capably, handling the pick-and-roll well, pushing the ball off his own defensive rebounds, and making passers uncomfortable with ball pressure.

He’s been the glue to the defense like Tim Hardaway Jr. has been with the offense.

What’s most exciting about Vonleh is he’s also showing off legitimate offensive skills to go with the D.

Charlie Zegers: I’m reminded of a couple of points from last week’s Musings.

You said, “Fizdale does some stuff that is concerning. There’s no way around it. [But] the things I thought were concerning are working out fine to be fair.” And I talked about how difficult it was for Fizdale to create a coherent lineup when plus defenders like Ntilikina, Dotson, and Robinson were mired in horrific shooting slumps.

Two days later, Fizdale made what was probably his most concerning move of the season, unveiling the Mudiay/Hardaway/Hezonja/Vonleh/Kanter starting lineup.

I’m not sure what aspect of this run has been most surprising. Vonleh has been wonderful. If he keeps this up, he’s almost certain to get consideration for “most improved” honors. But he’s been a valuable contributor all year and probably the Knicks’ most consistent all-around player.

But I’m wondering what the heck has gotten into Emmanuel Mudiay, and not just because I’ve spent most of this season campaigning for the guy to get traded or cut. Is this as simple as, “he’s playing better because he’s in better shape now?” as Alan Hahn, among others, have suggested? Has Fizdale “fixed” the guy? Like he promised back at his first press conference?

Do we need to start worrying that neither Vonleh or Mudiay is signed for next season?

He is someone I would 100 percent want to be a part of the team going forward. I think he fits with with Kristaps Porzingis, Mitchell Robinson, and can play as a lone center in smaller lineups.

Vonleh should be a high priority if the Knicks miss out on the highest of the high-level free agents and their top target with the mid-level exception if they do land a big name.

Mudiay has been terrific and I love how he’s playing, but I don’t feel as confident coming to conclusions about him as I do Vonleh. I need to see a longer stretch of good shooting for me to believe it’s real. There’s no question he’s headed in the right direction at this moment.

I still think it would make a ton of sense to “sell high” on Mudiay—and on Trey Burke, for that matter. And two of the teams they helped beat this week—New Orleans and Memphis—could certainly use some help at point guard. The Knicks might not have won tonight if Mike Conley wasn’t dead on his feet late in the fourth quarter; the Grizzlies could use a better backup than Shelvin Mack. And the Pellies just lost Elfrid Payton—who was actually playing really well—to a broken hand.

If I’m Scott Perry, I’d happily accept a second-rounder for Mudiay or Burke. Turn a reclamation project into a future asset and create a roster spot for Trier at the same time.

Bryan: The reality of the Knicks’ salary cap situation and their stated future goals makes the people playing well on one-year deals a fascinating situation. Vonleh is the only one I’d be hesitant to trade, but if you got a great offer on him it’s something you’d have to consider doing.

What could the Knicks get for some combination of Vonleh, Burke, or Mudiay?

These are questions the New York front office has to deal with in the coming months that aren’t going to be easy to answer.