Monday Musings: What Should We Expect in the Preseason? 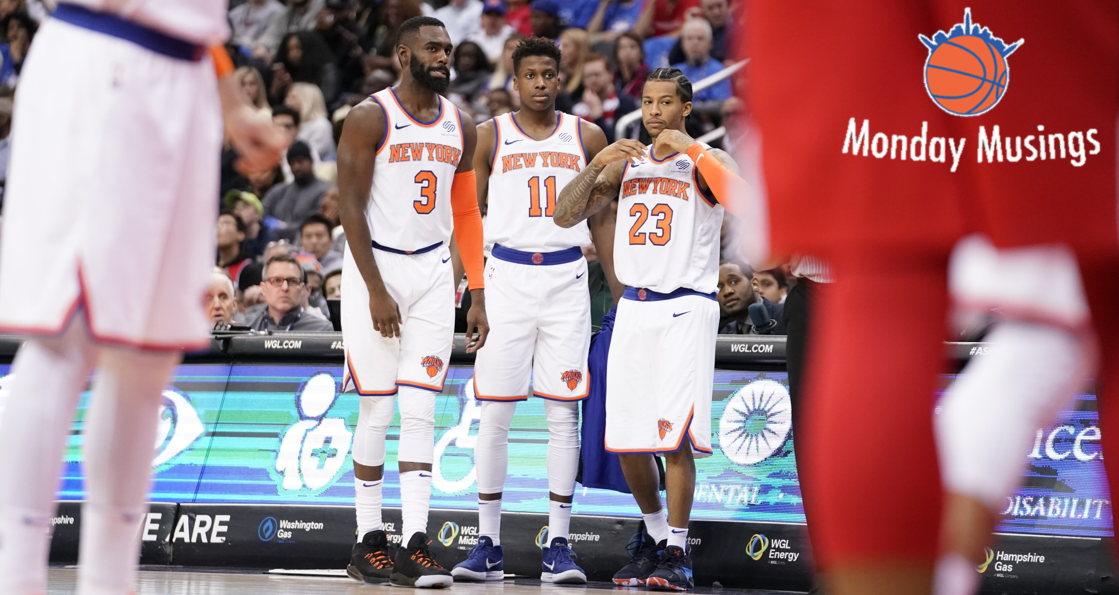 Knicks basketball begins tonight in D.C. What should we look for during the preseason?

Bryan Gibberman: We’re slowly inching towards the regular season but first up for the Knicks is the preseason.

Stefon Bondy of the NY Daily News tweeted this out on Sunday:

Fizdale says he has not settled on a starting lineup for tomorrow’s game. Worth noting though the players in blue jerseys at practice: Burke, Hardaway, Knox, Hezonja, Kanter.

What would you think if that was the starting lineup?

Charlie Zegers: To be honest, I don’t love it.

The frontcourt is fine. I’m eager to see what Knox can do, I’m intrigued by Hezonja at the 4, and Kanter is really the only option at center for now. But that frontcourt, combined with a Burke/Hardaway backcourt, means you’re sacrificing most of your defense for offense to start games. Is that a sound strategy?

If it were me, I’d probably start Ntilikina and Lee in the backcourt. I’m thinking they’ll be Fizdale’s best defensive pairing, which would mitigate, to some extent, Kanter’s shaky defense and Knox’s inevitable growing pains on that end of the court. I’m hoping Knox becomes a plus defender over time. He certainly seems to have all the physical tools, but you could say that about lots of guys.

(Jamal Crawford is my poster-child for “looks like he could be a lock-down defender but wow, looks are deceiving.”)

I don’t really know how Hezonja fits into that; I’m reading that he graded out as about average on defense last year, with some signs of future improvement.

I like the idea of having Frank and Lee hassle the opposing team’s top backcourt to start games, though, and then have the Hardaway/Burke combo come off the bench for instant offense. And that would seem to fit better with Fizdale’s stated priorities. But who knows?

Bryan: As we were working through this the announcement for tonight’s starting lineup came out and it ended up being Burke, Timmy, Knox, Lance, and Kanter.

It’s a preseason game and there’s no guarantee this will be who starts in the regular season but I’m not a fan.

This is the first tangible decision Fizdale has made as a head coach that we can judge and if this is what he does it’d make a lot of what he’s preached words and not much else.

That’s not a lineup focused on good defense. It lacks length at the guard position. It has four negative defenders on the court at once (Knox is a rookie and will almost certainly be bad at defense this season).

Is it something to freak out about?

I just hope this isn’t a sign of decision making to come.

Charlie: The switch from Hezonja to Thomas more or less confirms what I was saying earlier. The assumed starting five of Kanter, Hezonja, Knox, Burke, and Hardaway couldn’t be trusted to defend the five best players from my Tuesday night game at my daughter’s school gym.

(Not that there’s any shame in that… Rich T., in particular, has Steph Curry-esque range. Or at least it feels that way when I’m chasing him. But I digress.)

I’d be more concerned about all this, if not for a few mitigating factors:

Also, I get the vibe that Fizdale is using these early preseason starting assignments as a way to honor guys who have impressed him in practice. We might not see this same group starting the next game, regardless of tonight’s outcome.

Bryan: Agreed. Honestly, this morning I started tweets twice to comment about the starting lineup & deleted them.

It’s a fake game that doesn’t matter and reading too much into any decision is a ridiculous notion.

I’m just happy Knicks basketball is back and hopefully the roster begins the process of showing positive signs for the future.