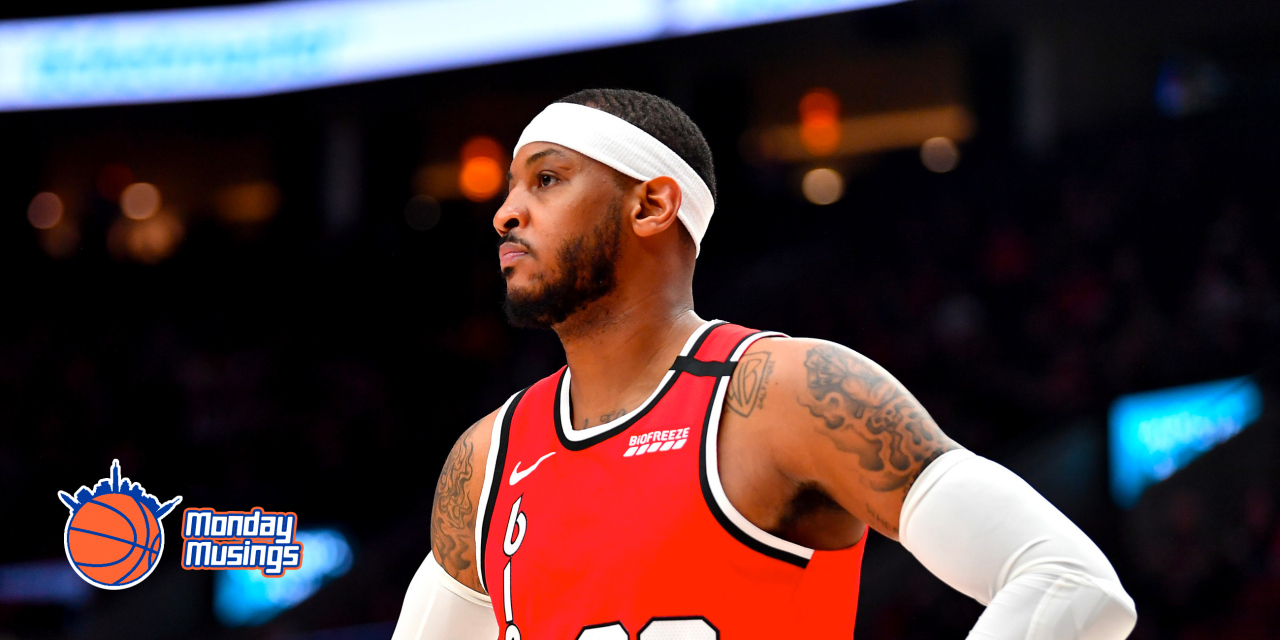 Could Carmelo Anthony be in play with the CAA-aligned Knicks front office? A farewell reunion tour with the ex-‘Bocker is possible in this week’s Musings.

Happy endings are not a common occurrence at 4 Pennsylvania Plaza. In fact, it’s quite the opposite. Patrick Ewing, Bernard King, even Willis Reed can all account for an unceremonious ending with a franchise with which they had some of their best moments and to which they gave so much. Carmelo Anthony is another player who qualifies for this group—for right now. Prior to being traded he was dragged through the mud by his team president and even began to draw ire from disgruntled fans. Luckily, that may not be the lasting memory.

There are reports that Anthony would like to finish his career in New York. Anthony was an option for the team last season, had free agency gone according to plan, and the presence of former agent Leon Rose should only increase the likelihood of a homecoming send-off. When Anthony signed with the Portland Trail Blazers, following one of the more baffling exiles, he said this wasn’t a farewell tour. Coming back to New York could be just that.

Denver could have had the lion’s share of Anthony’s high moments, but New York always fit him more. He is seventh on the franchise’s all-time scoring list, first in box plus/minus (for all you advanced stats folks), reclaimed the Madison Square Garden single-game scoring record and made the franchise watchable for the first time in decades.

In a vacuum, Anthony was this generation’s Bernard King more than he was our Patrick Ewing or Clyde Frazier. And that is not intended as an  insult. It is for this exact reason I believe Anthony’s number should hang in the rafters once he calls it a career and be done in a timely manner unlike his childhood idol King who’s “30” can instead be found spinning like a Beyblade on Julius Randle.

The best way to bring ‘Melo back for his official farewell tour would be similar to what the Miami Heat did with Dywane Wade. Wade returned to a bench role but still managed to squeeze out a few great moments on his home stretch. Anthony could fit in the same way.

During his original tenure with the Knicks, Anthony proved to be a capable mentor to Tim Hardaway Jr. and Kristaps Porzingis. There is no reason he could not have that same effect with this young group. As for playing time, just as Wade came off the bench for the Heat, Anthony can be a part of the bench mob in New York. On most nights he gets his 20 minutes, and on those nights he catches fire you ride it out.

The ever increasing possibility of Tom Thibodeau becoming the next head coach bodes well for this actually happening. Thibodeau knows the value of veterans and could lean on Anthony and Taj Gibson to be the coaches in the locker room. Coupled with the fact that MSG is rapidly becoming CAA’s covert headquarters, it would be surprising if this reunion doesn’t come to fruition.

If and when it does happen, I just hope it is done similar to how I’ve envisioned it. Relationships with former star players have not been the Knicks’ specialty, especially in real time. A proper send-off for Anthony could be tangible proof that the franchise is indeed committed to changing its ways.

Tom Thibodeau had his formal interview for the vacant head-coach position last week and will have his second interview at some point this week. This all but confirms what we have been told for the better part of two months: this is Thibodeau’s job barring an unexpected change of events. Reports of Jason Kidd being Thibs’ biggest threat only makes us want the team to make the hiring official as soon as possible.

The Thibs hire will not be a bad one. He knows his stuff, had a strong stint in Chicago where to his credit, he did build that Bulls team up. His Minnesota stint was less spectacular, but they did end a playoff drought under Thibs, and I think Andrew Wiggins and Karl-Anthony Towns keep escaping the blame for the lack of success.

Personally I prefer Atkinson and still do, but in Thibodeau I at least know the good players on this roster are in good hands. Frank Ntilikina will not collect dust on the bench. Mitchell Robinson will not have to worry about not starting. That’s more reassuring than nothing.

Another candidate coming back for a second interview is Mike Woodson, one of the few human beings who could say his time with the Knicks largely went well. Woodson was at the helm of that golden year 2012–13 season and was an assistant for Mike D’Antoni prior to that.

When news of his first interview was announced, the Daily News reported the possibility of Woodson coming on as an assistant. He currently holds that position for the Los Angeles Clippers so it’s not impossible to fathom. Woodson has that CAA connection too, and a hiring that would surely draw some enthusiasm from the fanbase.

Are we sure we have to go guard in the lottery? Landing LaMelo Ball—which continues to receive more attention and speculation—would be great, but Deni Avdija may be the wiser choice.

The reason for my wavering in the Ball dream is Avdija recent play. He has been the fortunate prospect to get some last minute material in for further consideration. The results have been strong.

Any concerns of his jumper have quietly slid off the scouting report. His ability to shoot at a high level like he has over his last six games he becomes a no brainer top five pick. Avdija’s fit was already properly fleshed out by my TKW Draft SZN regular Nick Carannante, so I won’t dig in too deep, but his arrival would be just as exciting as Ball or Killian Hayes.

For those of you too entrenched in the Ball camp this is good for you too. If Avdija shoots up draft boards it could present a clearer road for Ball to fall. But if you’re like me, and just want a good player, Deni would be as welcome an addition as anyone in this class. He would give the Knicks an upgrade at the wing and perhaps give Ntilikina another chance to win the job.

»READ: The toughest NBA Draft prospects the Knicks are likely to pass on