Monday Musings: Resting the Future and Playing the Injured 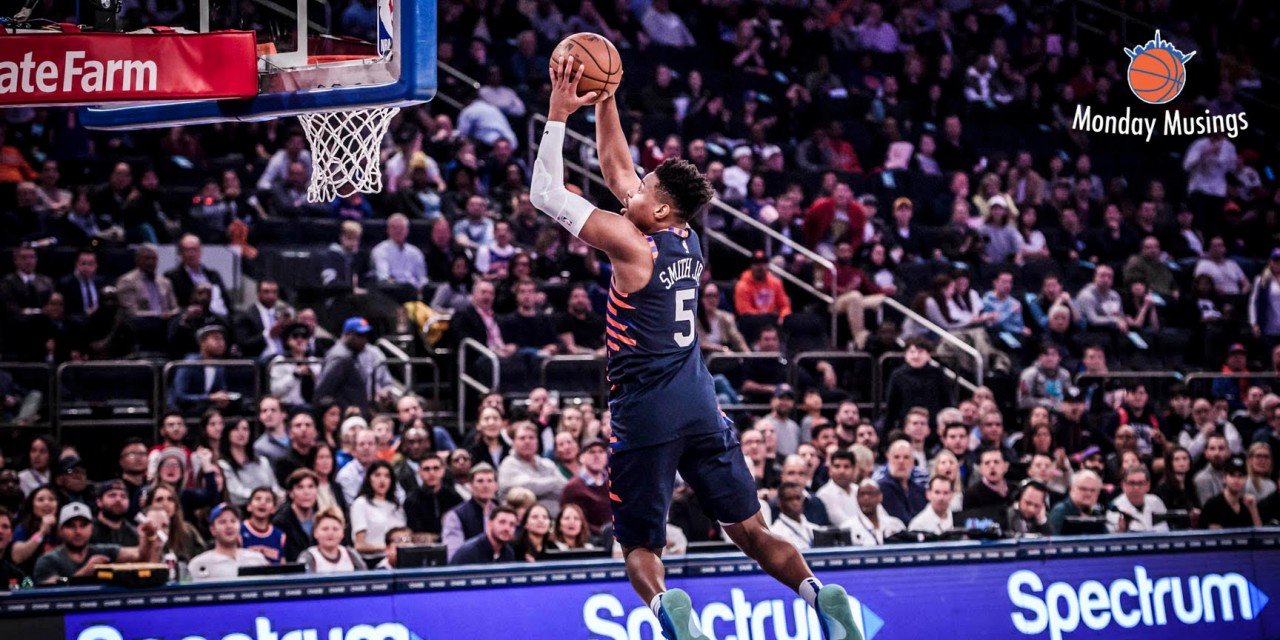 In this week’s Monday Musings, Bryan and Charlie dig into why pieces of the Knicks’ future were playing through injury against Washington—while Emmanuel Mudiay, seemingly not part of the future, was absent.

Bryan Gibberman: A simple question to get us started—why is Dennis Smith Jr. still playing?

I hear it spun as a feel-good story about a teammate giving his all but, ummmmmmmmm, it doesn’t seem smart. Smith’s explosion and first step are non-existent. If he’s not right, just sit him. I don’t get the organization’s caution with Emmanuel Mudiay and risk playing DSJ.

Being cautious with Mudiay is the right thing to do. The same standard should be held for Smith Jr., a player with a higher probability of being with New York in the future.

Charlie Zegers: That’s a really tough question to answer without more information—and the sort of information we’re not likely to get.

How bad is this injury? Is he actually hurt? Or is he just sore? Was Smith sitting due to an injury, or was that the cover story so they could justify taking an extended look at Kadeem Allen? But that plan was ruined when Allen got hurt?

If the explanation is somewhere in that neighborhood, I’m on board.

On the other hand, if running Smith out there was a desperation move because they’ve already decided that Billy Garrett isn’t an option (after two games) and they really want to avoid tagging this team with the “worst in franchise history” label…

Yeah, that’d be less than ideal.

Or maybe this was a matter of Smith surveying the situation and deciding it was his opportunity to rehabilitate his reputation, which probably took a hit when he went on sabbatical earlier in the season when he was unhappy with his playing time and role in Dallas. In which case, good for him, but I’d hope the team would step in if he was in any real danger of aggravating his injury.

Bryan: It’s kinda crazy that after all the point guard debates this season, we’re ending with Hezonja at PG (Fizdale announced he’ll finish the season at the 1). You can only laugh. Good for him having some success to close a difficult year.

Trey Burke started at the beginning, Mudiay started most of the year, and Frank Ntilkina and DSJ each got limited opportunities that were derailed for various reasons.

Mudiay is a great example of opportunity cost. Trading Doug McDermott for him was thought of as a no-risk dart throw.

It wasn’t. The Knicks organization wasted almost a year and a half on a bad player. He was prioritized over others, and McDermott ended up getting real money this past offseason from the Pacers. His value around the league could have been leveraged into something more useful.

Charlie: As I’ve said a few times—most recently to John Schmeelk on his podcast—I really hope that some day we learn why David Fizdale spent so much of this year trying to make Emmanuel Mudiay happen.

I don’t get it. Probably never will.

I’m all for no-risk dart throws. But when you keep throwing the same dart, over and over again, until there are hundreds of holes in the sheetrock from all your misses and you know you’re going to have to patch them or face paying a mint in room damages…then you’ve left “no risk” territory and are well into “opportunity cost” land.

Watch—Hezonja will turn into a poor man’s Ben Simmons/oversized point forward with his next team, and the Knicks will have missed out because they didn’t give him a shot while Fizdale was trying to get Mud right.

2019, the year of Mario Hezonja pic.twitter.com/zKSyyYpegS

Note: I don’t actually think this will happen. I do think “We’re going to get you right” will be remembered the same way “the East is big, man” is remembered.

With a shudder of horror.

Bryan: Fortunately I don’t think we need to worry about Hezonja becoming anything special, but your point still stands about the handling of the point guard position this season.

Fizdale went about it in the most boring, useless, wrote way possible.

As important as player improvement is for the Knicks, the same can be said for the coach.

»READ: Knicks free-agent reclamation projects: should they stay or go?