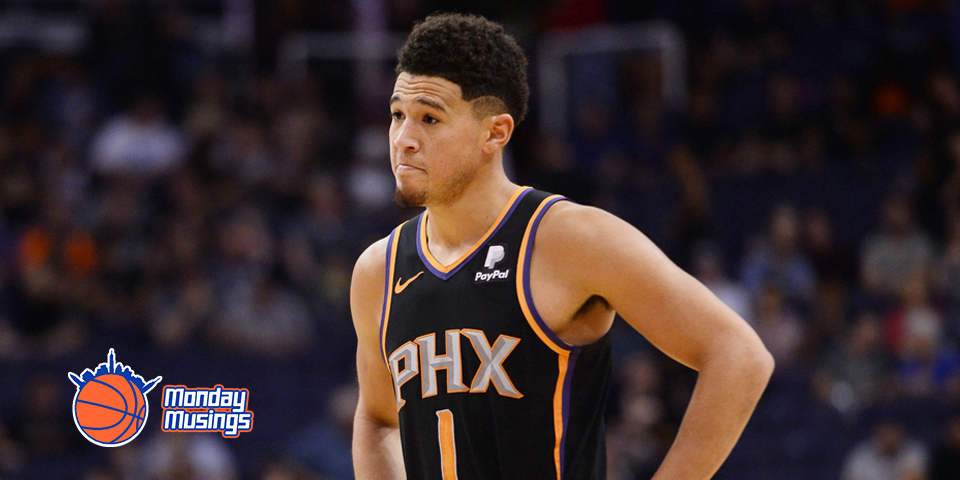 The Knicks’ only major headline-grabbing attention this past week was opting not to join a call about playing again, in this edition of Monday Musings.

Any other year the Fourth of July weekend is the busiest news day of the NBA calendar. 2020 is a different beast: not only was there no free agency this year, there weren’t even sports.

It was a slow news week as a result, but these are the three stories that stuck out.

For the first time in a long time I am happy to say that the New York Knicks made me proud.

The NBA seems to have made a deal with the devil to make up for lost revenue, exploring the possibility of a second “bubble” in Chicago for the eight teams that did not make the 22-team Orlando bubble cut. In a call held with the league and the non-bubble teams Thursday, the Knicks were the only team not to have a representative on the call.

The team instead spent their Thursday afternoon productively by interviewing Jason Kidd and Will Hardy for their vacant head-coaching position, and you know, planning for when the games start to matter again.

On the call between the league and seven of the eight non-Orlando teams the Chicago bubble was presented as a mini-training camp and Summer League–type scrimmages with a return date of September. There would be no ramifications for playing, so teams sitting in precious lottery real estate would have nothing to fear.

Not only is it ridiculous that the league is pushing for this while the Orlando bubble is already off to a bumpy start, with positive COVID-19 cases sprouting up daily, but what is the appeal of watching the eight worst teams in the league? There is little incentive and a ton of risk. There is a quick turnaround for next season’s December start; one bad break and next season starts behind the eight ball.

The Knicks have rarely been on the frontlines of something right, but they can do that by opting out of Chicago before it even happens. There is no reason to risk the injury of R.J. Barrett, Mitchell Robinson, or Frank Ntilikina—and if you think this is an overreaction, let me remind you what team we are talking about.

This is the team who missed out on the biggest free-agent signing (allegedly) because he tore his Achilles playing for his soon-to-be former team. A fire extinguisher accelerated their exit from the playoffs one season.

Then there is the genuine awkwardness of the players already on the outs. Bobby Portis knows he is a goner, so why would he want to play? Julius Randle and Dennis Smith Jr. can probably read the tea leaves too, so why risk injury? It’s a money grab by the league at best, and one of which the Knicks should steer clear.

How many times do we have to teach you this lesson old man? Marc Berman must be having serious Knicks withdrawal. There is no other explanation for the rumors coming out of his mailbags lately. Over the weekend alone, the New York Post reporter linked the Knicks to Devin Booker and Damian Lillard.

I wish I was joking…

"If scoring point guard Lillard asks for a trade, it’s believed the Knicks or Lakers would be his choices."

Devin Booker could emerge as a trade target for the New York Knicks, per @NYPost_Berman

"…since Leon Rose was hired as president, the player to watch out for most is Suns combo guard Devin Booker, according to league sources."

Berman has cracked the code to making news during a perpetually slow news cycle, and he can’t be stopped.

I love the sheer lunacy of the Lillard report. It is the quintessential Knick rumor: star player is not available, but if he were to force himself available, the Knicks would be on his list. What makes this clearly false rumor great is Berman hedges himself with Lillard’s prior interest in New York. If anyone calls out Berman he could always point to that Vanity Fair piece and say “it’s not impossible,” which is exactly what he did.

Berman’s Booker rumor is much less far-fetched but groundless nonetheless. The reasoning for Booker becoming the team’s top trade target (which should be the case by the way) is simple: Booker’s connections to his former agent Leon Rose. Berman hammered that home with an anecdotal quote from Booker.

The finishing touch was tying it in to Rose’s comments last week about beefing up the offense. As far as sourceless rumors go, this is a Mona Lisa. Booker plays for one of the few teams as dysfunctional over the years as the Knicks, and someone who would be a perfect fit for the pieces already in New York.

Marc Berman may piss off fans, Frank Isola, and players, but the man is an artist, and like many good artists he will be missed once he is gone.

One year ago last year my basketball world fell apart. Kevin Durant was all but a Knick in the latter part of 2018 and then the Knicks blew it. This wasn’t your run-of-the-mill Knicks fumble, those you at least see coming. For some reason I truly believed Durant was coming, and until my last breath I will tell you had he not torn his Achilles he would have convinced someone to join him in New York and Rich Kleiman would have the job Rose now has.

What have we learned a year later? For starters, the Knicks are not in a worse place—they are exactly where they were, which in this case is a win. Rose and his power broker William Wesley have the connections to land that ever elusive star, and their presence is the single reason for hope.

The problem with the team’s chase of Durant and LeBron James before him is they pitched New York City and that’s it. No plan, no viable roster, just New York City. Rose and Wesley can change this, first by being confidants to star players. Steve Mills may have had connections within MSG, but outside he proved to be as good a salesman as Ryan Howard.

Durant was supposed to be the recruiter but lost all leverage when he went down, and no one in the organization had the ability to convince another star to hold it down until Durant was healthy. There wasn’t enough respect. Rose and Wesley have that respect, and have significantly more brain power in a front office who can build a team appealing enough to attract a couple of stars.

And here are the two final points: New York City isn’t enough of an appeal anymore. You have to plan to bring in two stars when you plan for these big moves. No one is signing anywhere alone; if you’re going to pull in a whale akin to LeBron or Durant or Giannis, you have to have another star on the way or attached. If the Clippers and Heat had to do it, the Knicks are no different.

I’m not sure the organization knew that prior to last year. But they sure as hell know now. That passes as progress in these parts.