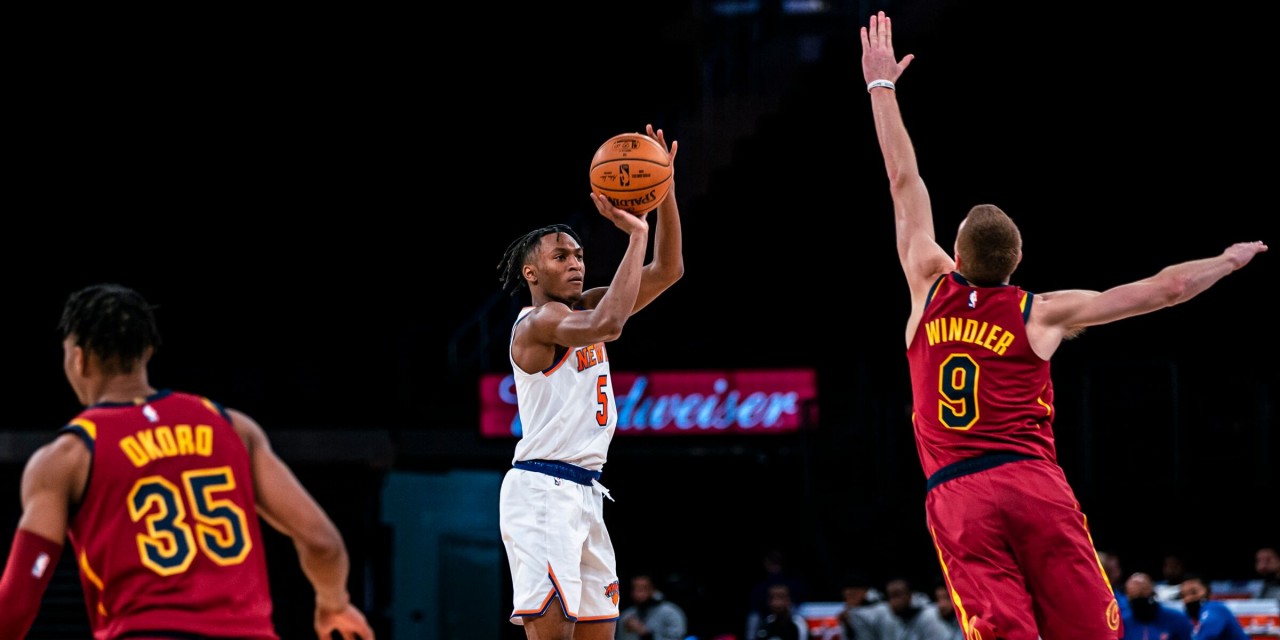 The Knicks ended preseason with a massive blowout victory over the Cavs and overall showed a few reasons to care about the season.

Is this what hope feels like? In the lead up to the preseason even the most cockeyed of optimists have to admit they are surprised by how enjoyable the New York Knicks’ preseason was. The 3-1 record on its face was nice. How those three wins occurred is where the good stuff lied.

For the first time since the dawn of James Dolan, the Knicks appear to have a coach that has a clue of what he is doing—okay that may be a stretch. You get the point, Tom Thibodeau has a functioning brain between the ears, something that was not as easily said for the recent slew of dreck to man the head coaching chair. Thibodeau has not chained himself to any player or rotation, he has found a way to prioritize R.J. Barrett, and seems to have gotten his young group to buy in.

While it may be too early to get too far ahead of our expectations for the season it feels safe to say Tankathon sims should not be the daily regimen it has been that last couple of seasons. That does not mean the Knicks will sneak into the playoff or be remotely good in the regular season. It just means the Knicks have a roster worth caring about, not a collection of players who will be gone at season’s end.

There is reason to be hopeful that a chunk of this roster will be here to stay, and from what we saw in the preseason there is also a reason to tune into Knicks games.

Here are a few specific reasons.

Thibodeau Knows How to Use RJ

Understanding your best player is bare minimum for a head coach, which goes to show you the hell we have been in. Kurt Rambis wanted to use Kristaps Porzingis at the 3.

Thibodeau will not be that guy. One thing that has shown through clearly is Thibs’ grasp of the importance that Barrett becomes a good player. Following a rough stretch in the first half of the preseason opener, Barrett settled in. Thibodeau started the very next game drawing a play up for Barrett, getting him off to a strong start. The end result was a 25-point performance.

Barrett’s strong preseason is the main beacon of hope. Him becoming a player that attracts other players is crucial; it is very likely the Knicks do not creep into the top three of the draft again for some time, especially with level lottery odds. Life is much easier with Barrett panning out. Thibodeau and his staff have done a good job making this more possible than it was six months ago.

For starters, they have a handle of where in the lineup, viewing him more as a small forward than a shooting guard, per the New York Post. Barrett is a smart player capable of moving the ball, but him receiving the ball ready to attack is better than him trying to create for himself at this point in time.

Barrett’s three-pointer continues to be the small dark cloud over his game (2-for-16 in the preseason) so the more shooters he can share the floor with the better. Playing small forward allows that. Thibodeau can now run Barrett out there with a healthy combination of shooters, which helps free him up to attack.

If Barrett can capitalize in the areas of his game he is already good at (midrange, driving to the rim, drawing contact) instead of forcing the part of his game still in need of serious improvement (three-point shooting) he can still see a leap as a scorer and playmaker this season.

Wise Beyond Their Years

Obi Toppin and Immanuel Quickley may be senior citizens to draft folks, they are spry and young in the NBA, and so far a joy to watch. Toppin burst onto the scene with massive amounts of energy, finding ways to impact the game that did not include dunking.

Not that the dunks are not every bit as electric as anticipated.

The more promising part of Toppin’s game is his passing. He has legitimate vision and knows that it is okay for the ball to move before he decides to score. Despite his highlight dunks, this was my favorite Toppin play of the preseason:

He kicks the ball out, finds his spot on the floor and stays ready to score. The awareness, vision, coupled with a post game that looks ready for the league gives Toppin a strong foundation heading into his rookie season. He was a little coy with his jumper, which is not a total surprise. Once he lets loose the floor can open up even more.

On the other side of the willingness to shoot spectrum is Immanuel Quickley. Whether you felt like Quickley was a reach or not, one thing is crystal clear now: the Knicks have needed a guard like Quickley for far too long.

Quickley is not shy with his shot, his floater, and like Toppin, brings an unreal amount of energy to the floor. The lethargy of last season was nonexistent in that kid-fueled fourth-quarter comeback against the Cavaliers and Quickley was in the middle of it. With Quickley at the point the defense actually has to creep past the three-point line and has to focus on more than Barrett or Julius Randle post-ups.

And above all, he helps the Knicks play at the speed they need to play at right now. The younger Knicks all play better when the speed is cranked up and Quickley’s style plays right into that. Given the other option is the plodding, brickhouse Elfrid Payton, Thibodeau does not have many reasons to not give Quickley major minutes from the jump.

Is Kenny Payne Master Yoda or did prior coaching regimes lack that much of a clue? I’m not sure. I will say the final two preseason games gave me hope for both Julius Randle and Kevin Knox as Knicks.

Knox was the most encouraging for obvious reasons. As the homegrown player who looked like a major flop last season Knox had something to prove right away. He didn’t find his groove in Detroit, however, upon returning to New York, Knox relocated to an area of the floor Thibodeau wants to exploit: the corner.

Knox shot an unreal 9-for-12 from deep in his final two preseason games and a lot of those attempts looked like this.

ANOTHER KNOX CORNER THREE BROUGHT TO YOU BY BEAUTIFUL BALL MOVEMENT pic.twitter.com/xDOBIt71Bl

If Knox can make the corner his home and shoot low 40’s from deep he will suddenly find himself in the thick of the rotation after becoming an afterthought last season.

Randle is a different case, his role projects to be reduced from what it was last season. Why Steve Mills and Scott Perry felt Randle was a top scorer for a NBA team is anyone’s guess and Randle paid for the past regime’s miscalculation, receiving a healthy amount of heat from fans all season.

The trend continued into the preseason with Toppin now in the mix, but once Payton was removed from the equation a different Randle appeared. A Randle that looked up when he had the ball, who passed the ball. Small sample size be damned, he finished with the third most assists this preseason. It was a pleasant surprise and a peek into what he can look like as one of the guys instead of the guy.

Randle is a solid NBA player who has his warts as any player does, and if used properly can help a team win. A trade may be the ultimate resolution to Randle’s time in NYC. If he does stay, a rotation of himself and Toppin is not the worst option for Thibodeau to have, especially if it is the Julius Randle that played at MSG those last two preseason games.

The kids are certainly the future of this team, yet Randle is no geezer at 25 years old. If he can carve out a meaningful role he could play out his contract in New York. For a franchise actively looking to change its perception among players, turning what looked like a negative tenure into a positive would be an underrated win.