Monday Musings: Welcome Thibodeau, How About Kenny Too? 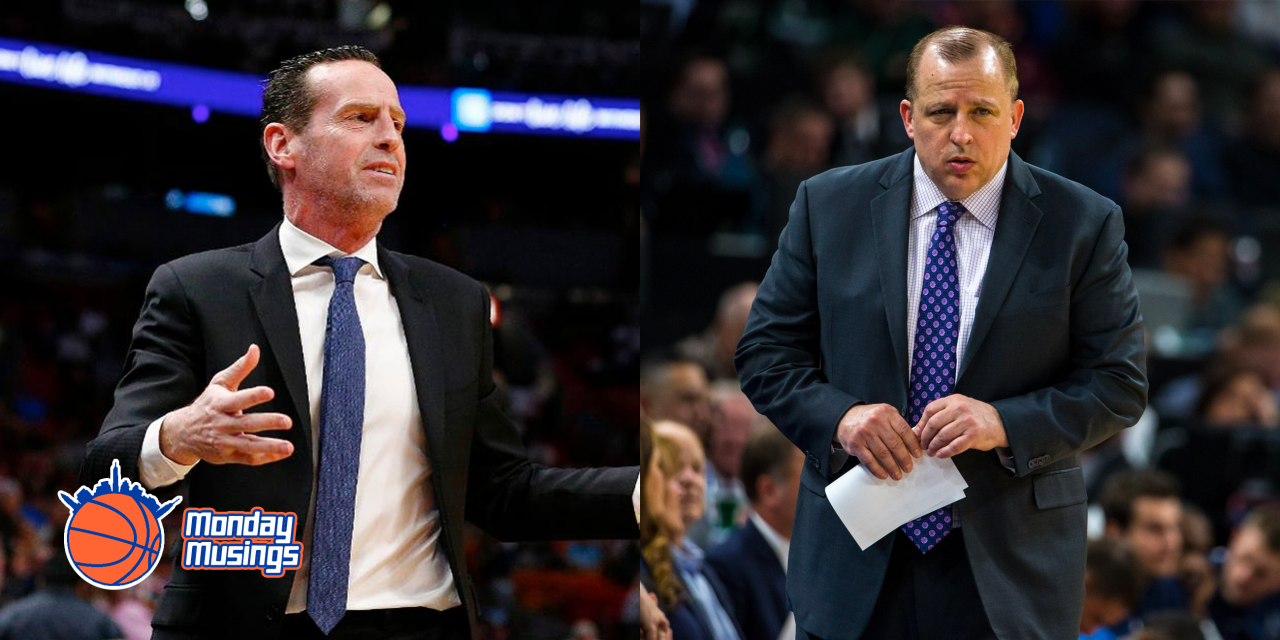 With Tom Thibodeau on board, perhaps the Knicks should be contacting Kenny Atkinson to still come in but as an associate head coach.

You have to give the New York Knicks credit, they sure know how to play the media and fans like fiddles.

After a quiet week on the news front, the team flexed their ability to insert themselves to the top of the Twitter tabloids in a matter of seconds, and within a two-day span pulled the chivalry jawn on us.

It began Friday with a report that the team had yet to advance towards negotiations with any candidate but still planned to make a decision by the end of July. Later that day news emerged that Jason Kidd getting the job as negotiations with Tom Thibodeau hit a snag (tipping their hand, in retrospect, that they were in negotiations with Thibodeau) and Dolan was not willing to meet whatever demands Thibodeau had made.

Fewer than 24 hours laters a fresh Adrian Wojnarowski breaks the news that the team is finalizing a deal with Tom Thibodeau. The hire, which could have been categorized as “meh” prior to the Kidd news, now looks like an escape from death.

Now that Thibodeau is officially on board, most administrative business has been settled. Thibodeau’s staff could feature two familiar names: Mike Miller and Mike Woodson. Shortly after the Thibodeau news broke, SNY’s Ian Begley tweeted Miller and Woodson have strong support within the organization to be named assistants. This corroborates a New York Post report that Thibodeau would sign off on Leon Rose and the front office having some say on the coaching staff.

Thibodeau will likely bring some familiar names like Andy Greer and Daisuke Yoshimoto as well, but Rose will get his share of guys, and should make one last move to settle all business: bring Kenny Atkinson on as an associate head coach.

The two names that remained in the mix until the very end were Kidd and Kenny Atkinson. In the case of Kidd, he is currently an assistant role right now for the Lakers. It’s hard to imagine Kidd being enamored with a slightly elevated role on a considerably worse team. Kidd gives off heavy Littlefinger vibes, so him plotting to snake Thibodeau would be about the only reason for Kidd to leave LA for NY.

Even for the staunchest of Atkinson supporters would admit this would be the best possible compromise. A partnership of Thibodeau and Atkinson could lead to the satisfaction of any fan’s concerns. In Atkinson the Knicks would have their offensive coordinator, with Thibs playing the defensive counterpart. The biggest detail that Rose would have to iron out with Atkinson is that Thibodeau would hold the final call on any decision.

This concept would not be foreign to Thibodeau, who had a similar arrangement with Doc Rivers in Boston. The key difference is at that point in time Thibodeau had never been a head coach—the associate title was viewed as a step up in his career ladder. Still, the effectiveness of the partnership with Rivers spoke for itself; the Celtics made two Finals appearances and had an aggregate regular-season record of 178-68.

In order to replicate this arrangement in New York it would require Atkinson to make a majority of the sacrifice. He could use an associate head coach role in New York as a stepping stone for a future return to the top chair of the bench—at the moment the Knicks are the only team with a head coaching vacancy. The Nets will have a vacancy once their season officially ends, but obviously Atkinson will not be involved with that.

The argument Rose could make to Atkinson is that there might not be many openings this offseason. Maybe Mike D’Antoni leaves Houston or another opportunity arises, but given the tight turnaround for next season, it’s possible most teams stand pat.

An associate role isn’t the top seat, however, as Thibodeau can attest from his success in Boston. Atkinson could use this to bide his time for a good opening to become available. Thibodeau is capable of piecing together an offense, but his strong suit is defense. The great thing about Thibs is he doesn’t come with a “system” but likes to blend elements of certain offenses into whatever fits best with his roster.

Atkinson’s fast-paced, three-point barrage style of offense would still be a welcome site at MSG, after consecutive seasons of isolation-heavy systems. Thibodeau has a track record of being an open-minded collaborator and constantly cognizant of what other coaches are doing; there is a much lower chance of an ego clash.

It’s an ambitious ask, no question. But it certainly is possible.

Hopefully Tom Thibodeau has Twitter or Instagram, because Mitchell Robinson has been putting in work. Robinson has been in the gym most of this quarantine, and has been seen sporting some flashy moves we have yet to see in full force on the court.

Way back when we were just learning about Robinson, he mentioned he modeled his game after Anthony Davis. The things Mitch was doing in that video were very AD-like, specifically that jumper. Robinson has been coy with that jumper in the game so hopefully Thibodeau can convince him to break it out.

Year three will be a big one for Mitch. He finally has a coach who will play him the correct amount of minutes, and if he starts to add more dimensions to his scoring, he could be in line for a leap year.

The final item on Leon Rose’s checklist is finding a true number-one scorer. No one has taken the mantle Kristaps Porzingis vacated in his brief reign. R.J. Barrett could be that guy, but chances are that next guy is not in New York yet. He could be in the draft, on the open market or the trade market.

Zach LaVine fits the bill of a scorer, although the jury is out on how good a scorer. LaVine is intriguing enough that the Knicks have done their homework on the 25-year-old should the Bulls make him available. LaVine and Bulls head coach Jim Boylen will never be mistaken for friends. Should the Bulls look to move LaVine, the Knicks would be foolish not to at least check the price tag.

LaVine would add much needed shooting to the starting lineup and open up the floor for Barrett, Robinson, and Julius Randle. The problem is the price tag. If the Bulls want straight picks and allow Barrett and Robinson to stay, suddenly LaVine is an infinitely attractive target. The likelihood of LaVine coming at a discount is optimistic at the best.

According to SNY, the Knicks have done their due diligence on LaVine, likely weighing everything I just mentioned. Personally, I’m more interested in Lauri Markkanen, but a scorer of LaVine’s caliber, coming into a situation where the head coach already knows how to use him, is worth noting.