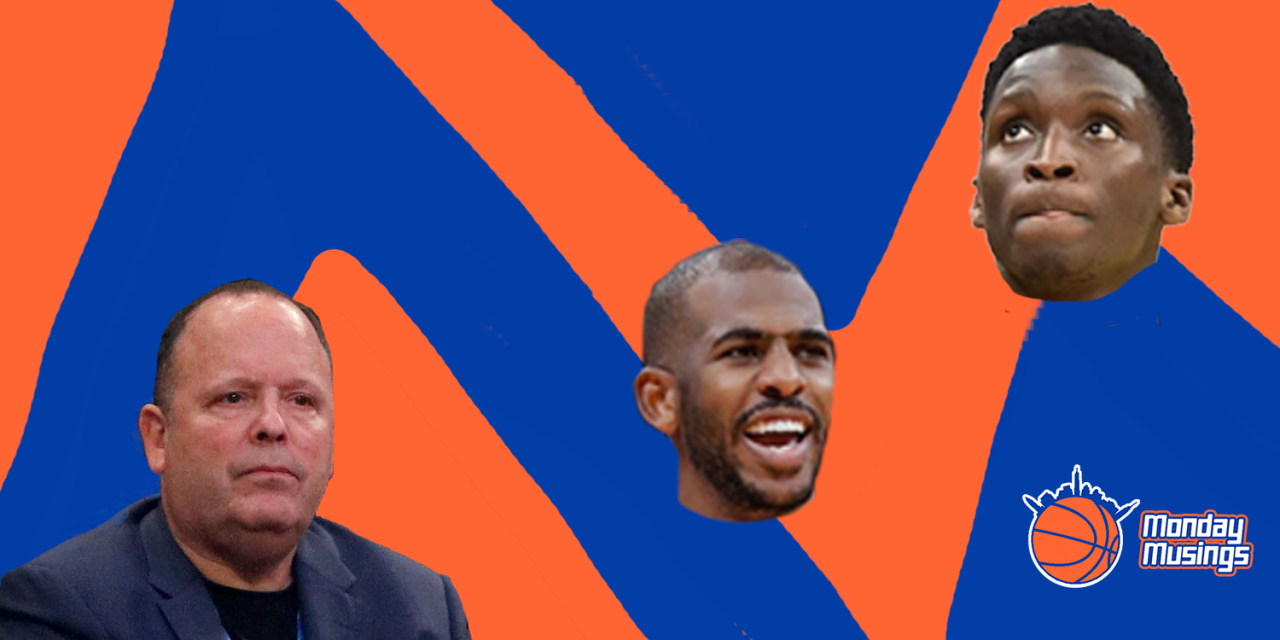 Leon Rose threw me off from the start. When I heard the next president of basketball operations of the New York Knicks was a CAA super agent, I’ll admit, I was looking for a sharply dressed, slick-tongued agent akin to Ari Gold. Instead Rose resembles another beloved HBO character of mine, Tony Soprano.

Rose’s arrival came at perhaps the weirdest time, not just in Knicks history or NBA history, but the world’s history, arriving in New York about the same time the coronavirus. The COVID-19 pandemic put the world on pause, and for teams like the Knicks who were on the precipice of yet another major overhaul, the timing could not be worse.

The Knicks won the first game after Rose was officially enshrined as new president—an impressive home win over the Rockets in which R.J. Barrett led the way. It was a new day and it looked like there was finally someone in the front office players, both internal and external, can look at in a positive light.

Given the cloud of uncertainty that has loomed over the league since March, Rose’s moves have been limited. His close friend and power broker William Wesley (more commonly known as World Wide Wes) was supposed to join him but ultimately did not, although it’s hard to imagine Wesley not being a strong Knick advocate for the duration of Rose’s reign.

The list of official moves Rose has made have been minimal. As the Knicks sit in purgatory and wait it is a valid concern to wonder what plans the new president has for the team; will Rose stay the course Steve Mills and Scott Perry had the team on or is he planning something more ambitious?

Thus far, we have received mixed signals. Rose’s first official hire was former Cleveland Cavaliers executive Brock Aller. Aller is a respected capologist, the type of person you would want when planning to reshuffle the deck for a major move. Aller was part of the front office tasked with keeping LeBron James happy in Cleveland which required shifting gears within cap space. If Aller was able to satisfy King James, working with James Dolan’s checkbook, Aller should be capable of creating financial flexibility when Rose believes the time is right to strike.

Aller will be an assistant general manager who will report to Perry, who was given a second lease on life late last week, returning for at least one more season. Until basketball resumes, it will be tough to gauge whether bringing Perry back was a stopgap move until a more appealing name becomes available—or if Rose is grooming Allan Houston, the former Knick and now longtime lingering New York executive, to take the reins under more stable conditions.

Tom Thibodeau has been the most common name linked to replacing David Fizdale as the next head coach, however, Mike Miller cannot be totally ruled out, Rose was reportedly impressed with the interim head coach. If Miller returns for one more season then the Perry move feels more temporary, and the rebuild will chug on for another 12 months.

The biggest clue as to what Rose has planned for the immediate will be how he fills out the roster. A chunk of the current roster, poorly built by Mills and Perry, can be shown the door at no real cost. Thus far the only viable free-agent targets that have been acknowledged by sources close to the team are familiar names and former Rose clients: Chris Paul and Carmelo Anthony.

Anthony’s homecoming is the easiest to envision and make happen since he will be a free agent after the season. Paul is another story; to land him would require a trade and what that trade looks like will tip Rose’s hand. If the team simply absorbs Paul’s remaining two years and approximately $85.4 million without parting with assets, Paul can be brought in to play the mentor role he played so diligently for Oklahoma City this season.

Paul’s ambitions are unknown to the general public, but if there is anyone who would know that answer it would be his former agent. Paul can do the mentor role for a bit, get paid and then join a contender when he feels like it. Working with Rose for all these years could give Paul the comfort and freedom to do whatever he pleases during his latter years.

The only real disaster scenario is Rose paying more than he would have to in order to bring in Paul. The team is equipped with a pair of first round picks in the upcoming draft, and another two in the coveted Cade Cunningham and Jalen Green draft. Sacrificing any of those picks in a Paul deal would be a return to the normal nightmare Knicks fandom has been subjected to.

Julius Randle’s fate is another pressing matter Rose must handle. Randle was a poor fit with the team’s two key building blocks, R.J. Barrett and Mitchell Robinson. Thankfully, it appears Rose is aware of this and has been reportedly open to dealing Randle. This is a solid indicator that Rose is as aware as we are with Randle’s fit on the team.

Conversely, Rose is a fan of Frank Ntilikina, who has built a cult following amongst Knicks fans and showed legitimate progress in his third season. (Rose represented Ntilikina until the Frenchman switched agencies in the past year.) Perry is not one of those cult members, and was one of the people open to trading Ntilikina. With Rose now calling the shots Ntilikina appears safe, which means you can include him with Barrett and Robinson as the new core. Perry draft pick Kevin Knox cannot say the same, Rose apparently doesn’t know what to make of the project pick from Kentucky.

So, what does this all mean? It means Rose has a functioning brain between his ears. It never made much sense to completely clean house during a pandemic. No one knows if and when the season resumes, which creates a chain reaction to the offseason, and how long the offseason will actually be. The key indicator to Rose’s plan will be the roster.

All reports on player personnel have been encouraging. Rose seems to favor Barrett, Robinson, and Ntilikina being the foundation. The possible additions of Paul and Anthony will supplement that, helping improve the on the court product in the present, and mentor the youth for the future. Imagine a world where LaMelo Ball, Killian Hayes, or Tyrese Haliburton get a year as Paul’s understudy. The same goes for Anthony, who can be the big brother Knox needs to develop an offensive game.

These are uncertain times we live in, but all things considered Rose has the pieces he needs to have a successful run in New York.

It felt inevitable but still stung to see the draft lottery and combine be postponed indefinitely. The league continues to hold out hope for the regular season resuming and until that decision is made everything will be pushed back.

The draft remains slated for late June but that, and free agency, will certainly be pushed back as far as August if not longer.

Last week MSG Network had a great homage to Jeremy Lin’s Hollywood-scripted run in 2012, replaying the classic Linsanity games for us to relive. It was a reminder that the Garden does indeed rock when given a good team. My question is, who else will the network honor?

In anticipation of a ‘Melo homecoming, maybe replay some of those games. What about Amar’e Stoudemire, the forgotten figure in recent Knick history who made Anthony tenure possible? Lin’s celebration was well deserved, and this celebration of former players is something the team should lean into more often than it has over the years.

Throw Victor Oladipo’s name onto the trade target list. The soon-to-be 28-year-old All-Star may be on his way out of Indiana due to financial reasons. The Pacers have to make a decision on Myles Turner, Domantas Sabonis, and Oladipo, it’s unlikely all three get big paydays, creating an opportunity for a team like the Knicks to strike.

Oladipo is the type of player the Knicks have been missing since the ‘Melo era ended. All the Knicks would have to do is keep Barrett out of the deal (it doesn’t make sense for the Pacers to be interested in Robinson with Sabonis and Turner already there), and it’s a home run move. It would give the Knicks a clearcut top option—a big reason for their offensive struggles under Fizdale—and free up Barrett to play the point forward position.

The only catch is Oladipo wants to get paid. He has one year left on his current deal and turned down an “insulting” four-year, $85 million extension last summer so the Knicks would have to make the deal expecting to open up that checkbook.

»READ: Retaining GM Scott Perry is a step backwards for the Knicks