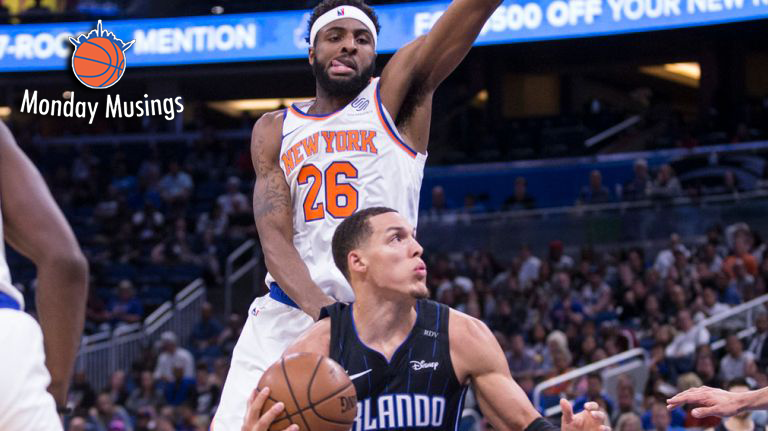 David Fizdale’s Knicks have given up 126.2 per game in their current five-game skid. Why hasn’t the team found lineup balance between offense and defense?

Charlie Zegers: You said something during the game on Twitter that was interesting:

Bryan Gibberman: In 22 minutes with Frank Ntilikina on the court the Knicks had a 91.5 Defensive Rating (DRtg) in the loss against the Magic.

In 26 minutes with Frank Ntilkina off the court the Knicks had a 166 DRtg.

Fizdale has talked a lot about building a culture based around defense and length. It’s time for those words to be followed up with actual actions. I’m not panicking or freaking out about it yet. He’s said it’s going to take about 25 games for him to settle on roles but it’s quite clear who needs to be the focus of this roster.

When the trio of Mitchell Robinson, Daymean Dotson, and Ntilikina are on the court together, the Knicks have a DRtg of 98.7.

Charlie: Fundamentally, I agree with you. And I think that’s Fizdale’s plan. Problem is, the good defenders haven’t been able to score at all, and the guys who can score can’t stop anybody.

Over their last five games, Dot is shooting 35 percent from the field and 18 percent from three. Ntilikina has been even worse, at 25 percent and nine percent. And in his last three games, Robinson has averaged 4.7 fouls in 17 minutes per game.

We should just save ourselves some trouble and let Joseph Heller write the game recaps.

It seems clear to me that Fiz keeps tinkering with his lineups and rotation in the hopes of finding a group that can play offense and defense. Unfortunately, I’m not sure that lineup exists on the current roster.

Bryan: I understand the concerns about the offense, but for once the Knicks have a chance to establish a defensive identity, and they should take advantage of it.

Defense has a chance to be a legit strength if Fizdale plays the right players. Those players also happen to the ones you’re hoping to develop into more on offense.

I’m also intrigued by how the group would do with simply replacing Mario Hezonja in the rotation with Trey Burke, and keeping the others the same from when the starting lineup was Robinson, Vonleh, Dotson, Tim, and Frank.

Charlie: If I’m Scott Perry, I’m shopping Burke pretty aggressively right now. In fact, if I’m Scott Perry I’ve already logged at least a dozen calls to New Orleans today. Burke is coming off two straight really impressive statistical games: 24 points in 26 minutes against the Pellies and 31 in 27 minutes last night. And New Orleans is short a point guard; Elfrid Payton is out until January or so with a broken finger.

I’m guessing Burke won’t be part of the team when the Knicks are good again. So turn him into a second-rounder or something.

(I’d rather trade Mudiay, but I suspect Burke is an easier sell.)

I really don’t know what to make of Hezonja, and neither, I suspect, does Fizdale. But if we want to play the small sample size game, I could point out that the Knicks have allowed an average of 130 points in each of their last two games, and Super Mario was a DNP in both.