Monday Musings: Why Have the Knicks Turned to Zone Defense? 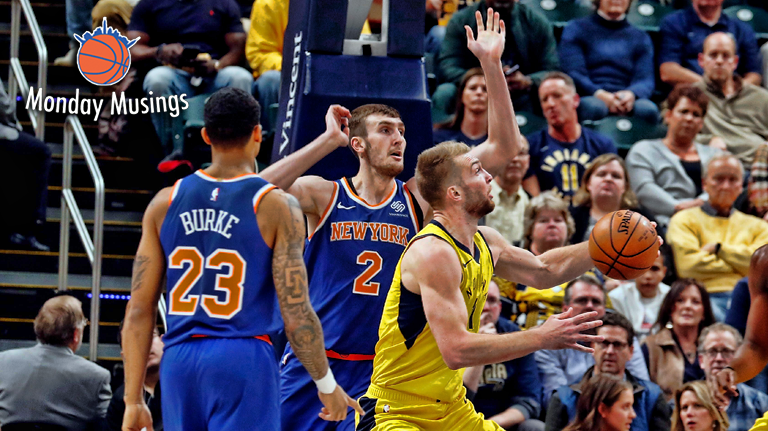 In this week’s edition of Monday Musings, Bryan and Charlie discuss Coach Fizdale’s dramatic use of the zone defense for the young Knicks.

Knicks head coach David Fizdale employed heavily for a second straight game during the loss to the Pacers after the 2-3 matchup look was effective in the Hornets win Friday night.

What happened in Charlotte wasn’t going to be sustainable. The Knicks on the season allow 35 percent of their opponents shot attempted to be from behind the arc. Against the Hornets, it was 47 percent and versus the Pacers it was 39 percent. One of the main principles of defense in 2018 is to limit the amount of threes attempted and the zone look is the antithesis of that. It should be limited to change of pace rather than a core tenant.

Pacers are really torching the Knicks zone defense. I'd be surprised if they keep running it tonight. pic.twitter.com/GbUNMblG1z

It worked better with Luke Kornet as the anchor rather than Enes Kanter, but man-to-man defense would, too. I’m interested to see how Kornet produces with Mitchell Robinson down for a little bit. I don’t think there’s any need for the Kanter/Kornet minutes split to be 36/9 like it was Sunday afternoon.

Charlie Zegers: There’s a fundamental problem with playing zone defense in the NBA. How do you break a zone? You shoot over it, or you get into your offense before it has a chance to set up. Pace and space. Now, where have I heard that before? Oh, yeah…the same principles that drive just about every offense in the NBA today. It reminds me of the most frustrating Mike D’Antoni/Mike Woodson Knicks teams and how they’d switch on every possession. NBA offenses are designed to force switches and create mismatches; the Knicks of that era would concede the mismatch on just about every play.

Fizdale suggested that the zone was designed to make his younger players more comfortable; he was quoted in the New York Post as saying, “It’s familiar to this group because half of them was playing a lot of zone a year ago. I caved in. Let’s try something a little more in their comfort zone.”

I’m not sure that statement holds up to scrutiny. First off: half? With Allonzo Trier and Mitchell Robinson sidelined, the only first-year player on the floor last night was Kevin Knox. Everyone else in the rotation—with the possible exception of Luke Kornet, who spent most of last year in the G League—had at least a year of NBA experience. (And it’s not like the Westchester Knicks play a ton of zone either.)

I have a sneaking suspicion that the zone looks were intended to benefit Enes Kanter to mask his weakness as a defender by letting him stay at home a bit more. (A better way to mask that weakness? Play him less.)

All that said, are we so sure it didn’t work? The Knicks kept things close for three quarters against a far superior team, despite the fact that they shot horribly. Hardaway was 1-for-5 from deep and 8-of-18 overall from the field. Vonleh was 1-for-5 from three. Burke, in his first game back from injury: 1-of-7. Ntilikina: 1-of-4. Knox was 3-of-9 from three—and he was 1-of-7 before hitting a couple late, after the game was more or less over.

Was the defense was the real problem?

In spite of the loss, let's rewind and watch some Knicks highlights.

Bryan: I’d say it did contribute to the loss and if you concentrate on process over the results continuing to allow an increased amount of three-point attempts isn’t a strategy for long-term success.

The Pacers won that game because they were the better team and had another gear the Knicks couldn’t match.

I understood Fizdale going with Burke because of all the injuries to Trier and Daymean Dotson, but once those two are back he should be the odd man out of the rotation. He took seven shots in 13 minutes last night and Frank was once again relegated to standing around and watching. Ntilikina has been playing too well for him to take a back seat to Burke.

Charlie: Fizdale said he’d bring some sanity to the rotation after 25 games. We’re 31 games in, and we’re still seeing some really strange combinations. (Lee/Burke/Ntilikina/Hezonja/Kornet was the second-most used lineup last night, and the same group but with Kanter instead of Kornet was third in terms of minutes played. Really?)

Now that we’re past December 15th and more players are eligible to be dealt, I sincerely hope Scott Perry is working the phone lines furiously. I’d love to see them clear Lee’s deal from the books and get some sort of return for Burke or Mudiay. (I’d love to see them deal Kanter or Hardaway too, but I don’t see that happening.)