What Do the Most Effective Lineups Reveal About the Knicks? 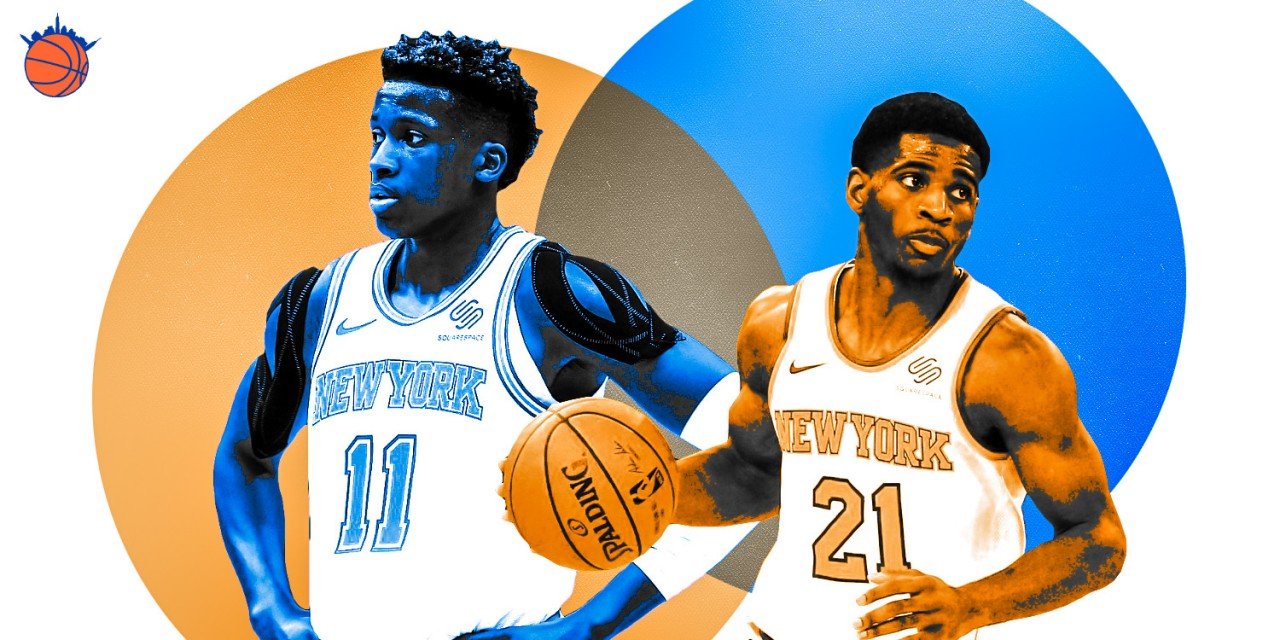 The Knicks have been a whole lotta bad, losing their 60th game on Sunday. Parsing through lineup data, which five-man groups worked the best?

If you were to gauge the net happiness that watching the Knicks brought fans and basketball observers, you’d probably get an extremely negative rating. Watching .189 winning percentage basketball is an exercise in monastic patience, akin to lifetime celibacy, really.

Internally, parsing through the ‘Bockers isn’t too different. There have been far and few combinations for David Fizdale’s team that truly worked—or even worked well.

The young squad has spent most of the 2018-19 season “figuring it out”—slotting players together to see if skill sets and tendencies on the floor mesh to produce winning basketball, in the same way two children stand on each other’s shoulders and don a trench coat to purchase liquor.

Then, of course, there was the typical in-season roster turnover one comes to expect watching the Knicks implode between nine months of basketball gestation. The Kristaps Porzingis trade sent Tim Hardaway Jr. and Trey Burke—two members of New York’s rotation—away, plus waiving Enes Kanter sent the 26-year-old Turkish center to the other side of the country.

This is an exercise is determining what we’ve learned from the Knicks’ “best” lineups. Per NBA Stats’ Net Rating lineups, we sorted the team’s five-man groups by minutes played and cast a spotlight on the lineups that recorded the most positive results.

That said, let’s dive into which lineups fared the best—and more importantly, why.

Mario Hezonja! The “Croatian Kobe,” drafted fifth overall in the 2015 class by the Orlando Magic when Scott Perry served as assistant GM—he’s here!

First off, Hezonja’s an interesting case because he trends towards the bottom in New York’s individual player NetRtg. He’s a 10.3 PER player, below average, according to Basketball-Reference, with unavoidable poor advanced shooting metrics (48.9 TS% and 45.1 eFG%).

BUT! Hezonja is a tweener forward with respectable ball-handling abilities and a career 32.4 percent three-point shooter. It’s not good, but you start to grasp why Mario’s presence isn’t downright alien.

O.K., now what really makes this lineup tick: its defense. You have key defensive stopgaps in Robinson—already close to being the league’s preeminent shot blockers—Ntilikina, whose defensive advanced numbers say he’s worse this year but he’s definitely the team’s best perimeter sieve, and Dotson, another emerging credible defender on the perimeter.

It’s no secret that the Knicks have succeeded this year when they play their best defenders. Most of the season has been magnified with how Fizdale’s offense will manifest. At first, that idea circled around how players might work around Porzingis, but since January 31st, it’s been muddied by how “Free Agent Superstar 1 will play next to Free Agent Superstar 2.” And, well, that’s not a healthy discussion for a rebuilding franchise; living in hypotheticals (please disregard if/when the Knicks sign both Kevin Durant and Kyrie Irving in July).

Furthermore, Trier slotted as this lineup’s shooting guard gives the five-man unit a legitimate “finisher” option with the shot clock expiring. It’s no wonder this lineup succeeded in admittedly a sample size on the smaller side. It’s one of many lessons, however.

What was revealed: Defense matters

This is a truly fun lineup that I’m sure plenty of fans were clamoring for: the team’s draft picks from the last two years plus Trier, the undrafted rookie.

Dotson is again playing the 3 in this lineup, something he’s done 66 percent of his time on the court this year, showing how he can be a versatile swingman who doesn’t need the ball in his hands to contribute well on both sides of the ball.

Kevin Knox is the only real difference as he’s subbed in for the four-year veteran Hezonja. The NetRtg here is far lower than the previous lineup in an extra minute, though. Knox shoots a higher clip from deep than Hezonja, at 34.7 percent, despite his playmaking skills still under wraps.

Similarly to this lineup with Super Mario, Fizdale’s team played well with the young players given free rein out there. The team improved with above average effective field goal percentage of 57.3 and True Shooting of 58.2 percent; so the advanced numbers point to this lineup scoring at a better, more efficient rate.

What was revealed: Leaning into youth helped, not hurt, the Knicks this year

The first wacky lineup here. O.K.—we have now-former Knick Trey Burke manning the 1 with Enes Kanter battling down low. Trier has been a consistent presence and the Dotson-Hezonja forward tandem is back.

This lineup thrives on penetration and rebounding. The key stat is an unworldly rebounding percentage of 59.4—the Knicks’ season number stands nearly 11 points lower!

I’d like to think this lineup is relatively fluky, though. The unit doesn’t shoot too well (49.2 eFG% and 53.4 TS%) and its 51.9 assist percentage is exactly identical to the team’s figure all year, which stands as league worst.

What was revealed: Rebounding and second-chance points make up for shooting woes

One of the most recent incarnations, we have G Leaguers Henry Ellenson and John Jenkins inserted into a lineup with Mudiay, who started the most games at point for the Knicks in 2018–19.

I’ll let that sentence soak in for a moment.

Jenkins lit up the G League and battled back to make the Knicks roster (and sign a partially guaranteed deal for next season) due to his uncanny shooting prowess. Along with his proficiency from deep—he shot 43.5 percent this season in the developmental league—Jenkins is a solid defender for his position despite his size (6’4″ shooting guard).

Ellenson has had Hezonja-like mini-successes and moments. While flashing long range, Ellenson’s revelation has grown from the power forward’s dishing. On two non-consecutive occasions the Marquette standout posted five-assist nights off the bench.

This lineup benefited from the advanced metrics favoring shot selection—Ellenson and Jenkins from deep, Robinson practically only attempting dunks. Curiously, Trier is here, too, but siding next to Jenkins and Mudiay pushed Trier on the wing more often, thus positioning him more as a shooter and less as a primary creator for this group, taking fewer mid-range shots.

The group’s two-point field-goal attempt frequency is a tick slightly above the season number at 68.9, but as stated before, they’re taking better attempts, per the True Shooting metric.

What was revealed: Improved shot profile strings together misfit pieces

This lineup had real estate before the trade deadline with Kanter, Mudiay, and Hardaway firmly entrenched in Fizdale’s starting unit. Next to those three are Trier and Vonleh, the latter started in 57 games, which will probably be the high mark for any ‘Bocker this season. The lineup also appeared in nine games but the team was 4-5, pretty much as close to an average team as you’ll find amongst these lineups.

What made this work, then? Poor rebounding and assist rates didn’t help, but ungodly shooting worked in the limited time these players ran together.

Neither Mudiay, Trier, Hardaway, nor Vonleh are “elite” three-point shooters, but if you remember earlier in the season we saw Vonleh go on a stretch where he hit nearly half of his triple attempts. Coupled with Hardaway’s willingness to shoot from downtown (he made 34.7 percent of his threes with the Knicks in 2018–19) and Trier’s slashing, this lineup shot a 64.5 TS%, which would lead the league by a wide margin.

What’s boiled down here is pretty simple after checking the advanced numbers and piecing together the skill sets of the players: this five-man lineup shoots not well—trends in the 33 percentile for the two shooting metrics provided above—but rebounds very well (would-be best team total rebounding percentage), is a beast on the offensive glass (would-be second-best offensive rebounding team), and, crucially, plays an up-tempo pace that would just edge out the Golden State Warriors, averaging out to the league’s 10th-best pace.

Returning to the first lineup’s point, though, we have reputable defenders in Ntilikina and Dotson with Robinson’s astute blocking prowess intimidating opponents (and his fouling bringing the rookie back to earth). Vonleh isn’t a slouch on that end either, and Hardaway’s improved 2019 shot profile adjusted his status from J.R. Smith chucker to three-point shot maximizer (his overall shooting took a big hit this season, a career-worst, but his personal TS number indicates better performance than the raw field goal percentage).

What was revealed: Balancing responsibility on defense, crashing the boards, and leaning into fast-paced, creating turnover style of offense yielded the best results for the Knicks in 2018–19.

»READ: Fizdale and searching for identity in the big city