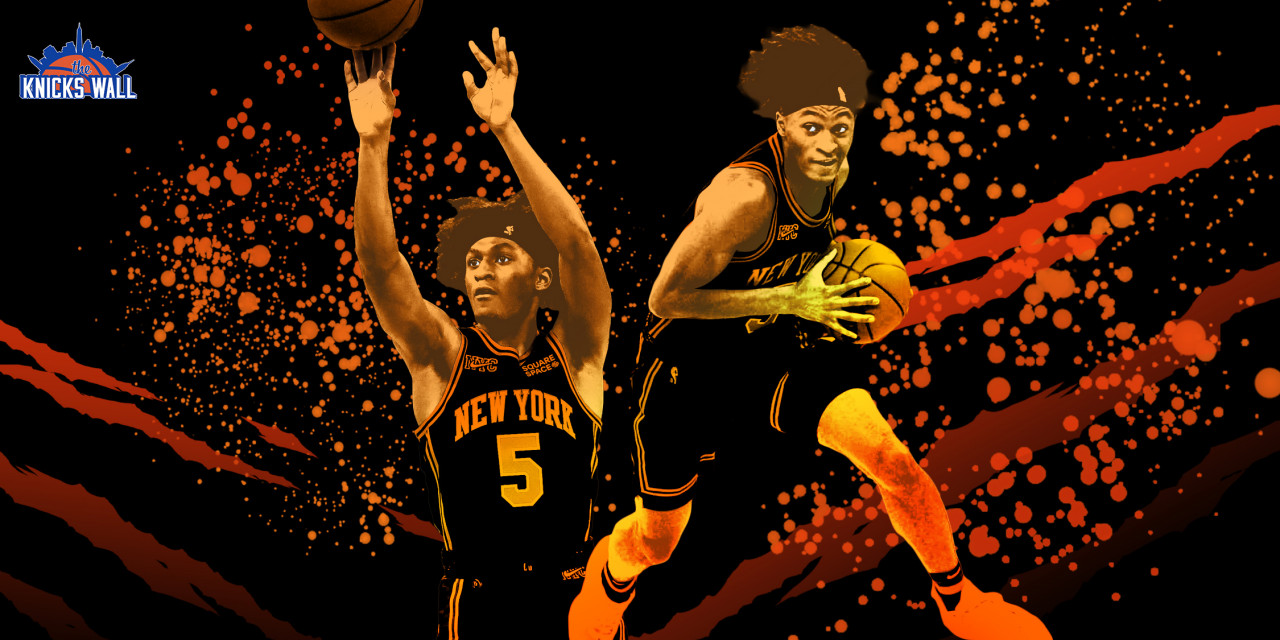 Among one of the several ideas to fix the Knicks is handing Immanuel Quickley the starting point-guard job.

It’s tough to be disappointed at a team that’s currently over .500, but the New York Knicks sit at 10-8 and there’s plenty of concern surrounding their roster. The starting lineup is one of the worst lineups in the league among five-man lineups with over 100 minutes played; their defense, a top-five defense last season, currently sits at 16th overall and has been as low as 26th to start the year; and the team’s two best players—Julius Randle and RJ Barrett—are playing below their 2020–21 performances.

One fear? This could just be the Knicks. New York could be a team good enough to beat other good teams, but lacking enough to truly contest against some of the better teams in the conference. In an offseason that saw them sacrifice their defensive identity for more offensive firepower, the team finds itself in a weird space. New York doesn’t have a good enough defensive five to lean on to get them through most games while having offensive players who have overlapping flaws. Tom Thibodeau is a great coach and the coaching staff is solid, so perhaps they can turn it around, but from my view, this team has a clear ceiling and it’s a bit disappointing.

It’s still early, but we’re getting to the point where results become trends. Can New York’s defense float back to that top 12 range? I’m not 100% sure. Can Randle recapture the magic of last season? Maybe, he’s coming off two impressive showings against Chicago and Los Angeles. However, we’re getting to the point where if it doesn’t start happening now, we’re going to talk about trades and other avenues to help the team. I’m prepared to talk about one today: moving Immanuel Quickley from the reserves into the starting point-guard role.

After a stellar rookie season, it’s time for the second-year guard to move into the starter role, largely because of the skills he provides, the “return to normalcy” for Randle, and potentially, what he does for the second unit by moving into the starting lineup.

Note: The same starting five with Nerlens Noel in place of Mitchell Robinson has a NetRtg of 7.8 in a minuscule 52 minutes.

The defense is a major red flag, but the offense, after spending the majority of the offseason searching for players to add another element outside of Randle, is a concern. Knowing that Thibodeau leans on his starting lineup more than any other coach, something has to change.

Thibs loves his starting center to be defensive-minded, so one of Nerlens Noel or Mitchell Robinson stays. Barrett and Randle stay; though Barrett and Fournier have sat in the fourth quarter when they haven’t played well. Fournier is a hot topic for his poor start, but he’s currently shooting 37.9% from the outside and I believe a Quickley-for-Walker swap allows the former Magic guard to get the ball in his hands; something New York wanted from that spot. Here are some basic numbers between Quickley and Walker:

Walker vs. Quickley this season, via Basketball-Reference and dunksandthrees.com

The usage rate is almost exact, but what they offer is slightly different. Despite being seen as a driver, Walker isn’t producing much in terms of free throws and, despite being a better shooter inside of the arc, Quickley still has a better True Shooting percentage. The two key differences between the two are the shooting and the defense. Walker offers more scoring at the rim (Quickley has just 13 shots at the rim; both players shooting 53% at the rim), but Quickley launches more threes.

Defensively, Quickley just offers more. Walker, while he tries, is still a six-foot point guard coming off various knee injuries. The former Husky was never a good defender and as his offensive production declines, the lack of defense becomes harder and harder to ignore. Quickley, at 6-foot-3, offers more in terms of contesting shots, navigating screens, and contending with bigger guards at this stage of his career, and at the very least, that adds another effort defender into a group that needs one.

And to be clear, this isn’t saying Walker is the complete problem either, but his play is not good enough. He’s not scoring at the rim and while he’s shooting well from three, his game still sprawls into the middle of the floor, the same areas where Randle resides. When you add his good, not great offense, with poor defense, I think a role adjustment, one that allows Thibodeau to get the best 15-20 minutes from Walker, is a worthy shot in the dark.

If we were to nominate a focal point for New York’s disappointing start, Julius Randle would be my nominee. After a breakthrough season, Randle has struggled to replicate the success through his first 20 games. The three areas of improvement—outside shooting, mid-range shooting, and defense—have all fallen off a cliff. His shooting numbers have fallen back to pre-2020–21 numbers and the B+ level defense has fallen back to his C- level.

When you combine this with his need to take mid-range shots akin to last season when the offense struggled and his lack of success as an off-ball player, we’ve seemed to come to another fork in the road for Randle. The numbers can improve, but it seems like the best Randle is the heliocentric Randle—the guy you run near everything through. On the other hand, the Knicks, amidst this slow start, have a top-10 defense. In the long-term, that off-ball success has to change for the Knicks to take it to another level.

Does Quickley help Randle get back to last season? It’s tough to say. Quickley doesn’t offer Randle a pure point guard capable of serving him easier offensive possessions, but he doesn’t have to. Where Quickley switches for Walker is that he offers more of a catch-and-shoot option off of Randle, who goes back to more of the lead option offensively. Quickley can run some of the offensive sets needed to help modernize New York’s offense, with Fournier assuming a slightly larger role as a ball-handler, similar to his Orlando days.

To an extent, RJ Barrett’s struggles might be more of an issue for New York (wings who can space the floor or truly handle and operate the offense are tough to work around), but Randle, as the team’s best player, has to take it up a level. While he’s a better player than Elfrid Payton, giving Quickley the starting job and allowing him to work more off of Randle while offering a better spacer off of him, and giving Fournier a bit more of a role in operating the offense could be one of the directions the Knicks could take.

View the starting lineup and bench as an ecosystem; a successful start from the starters allows the bench to maintain the success and then, the cycle continues. In getting Quickley in the starting lineup, the Knicks offense can improve, the defense can stabilize and the bench unit would go from being saviors attempting to get the Knicks back into the game to a group merely continuing the positive play.

If the Knicks ultimately decide to install Quickley as a starter, one smart decision would be slotting Quentin Grimes in the backup shooting guard role. Selected with the 25th overall pick in the 2021 NBA Draft, Grimes came from Houston with a reputation as a 3-and-D player, who could make his mark right away thanks to his age and experience. After a slow start, Grimes has seen some spot minutes under Thibodeau, as he attempts to salvage some defensive possessions.

This feels like the perfect time to incorporate him into the rotation.

Since arriving in New York last season, Derrick Rose has been an underrated defender, currently sporting a +2.5 Defensive Rating on the EPM website Dunks and Threes. His ability to work as a pick-and-roll guard, while being a solid defender, has solidified the backup point guard spot. With Rose, there’s Alec Burks, who, after Quickley, shares equity in receiving a starting nod over Fournier. Burks isn’t a great defender, but he adds another ball-handler and scorer offensively. Those two, plus Obi Toppin gives New York a balanced bench unit that impacts both sides of the ball.

Slotting Grimes in allows him to get more chances to show his value as a defender. At 6-foot-5, Grimes has shown the basic traits you need for a defender—good against screens, doesn’t ball watch, and good feet—but needs the game reps. With Rose and Burks around him, you remove the need for him to create much for himself; use him as a guard who runs off screens and generates corner threes. As he improves, giving him more reps on the ball works, as Toppin could be an electric roll man to work with.

This doesn’t completely eliminate Walker. Kemba could be used as a backup, who gets somewhere around 15-20 minutes a night and perhaps more when Rose is out or struggling, or when Grimes just doesn’t have it. Based on Rose’s recent defensive development, a few minutes with Rose and Walker on the floor could be a glass cannon—electric on offense, but very weak defensively. Either way, installing Grimes into that backup two-guard role not only helps with adding talented defensive players into the rotation but also assists in getting Grimes for more minutes in the near future.

The Knicks have several concerns as they move into the second quarter of the season. Figuring out the issues with the starting unit, figuring out better defensive lineups, and getting the best out of Julius Randle, RJ Barrett, and new addition Evan Fournier. The fourth seed in the Eastern Conference last season looks like a play-in contender to start this season.

One solution could be switching the starting point guard from Kemba Walker to Immanuel Quickley. While Quickley isn’t the pure point guard of yesteryear, his defense is a worthy upgrade over Walker, while the shot selection fits better with the other players in the starting lineup. Giving the 22-year-old the keys to the car and allowing him to fix the Knicks could be a bridge too far, but based on his recent play both last season and this season, he’s ready for the role.

»READ: Where does Alec Burks fit in with the new-look Knicks