Moving Off Ball Can Be Frank Ntilikina’s Saving Grace 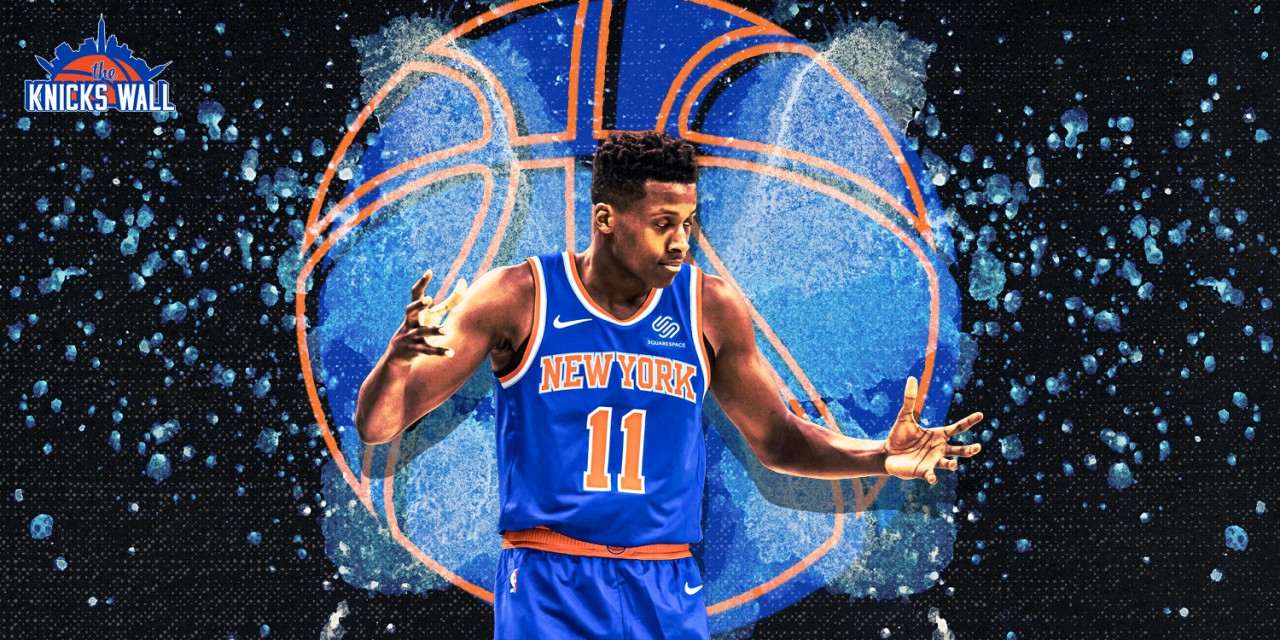 While point guard may not be the long-term solution for Frank Ntilikina, the fourth-year Knicks vet can still make his impact as a wing.

Say it with me: Frank Ntilikina is not the point guard of the future.


Okay, now say this with me: Frank Ntilikina can be, and should be, an integral part of Tom Thibodeau’s rotation this year and in the future.


If and when the New York Knicks figure out how to win games again, and add some players who can really score the basketball, Ntilikina is the ideal player you want in your supporting cast.

The moment of truth is rapidly approaching for Ntilikina’s future in New York. As it stands, he is set to hit restricted free agency after this season. Some of his draft classmates have already secured their future.

It is not surprising that the Knicks and Ntilikina have not reached an agreement on a long term deal. Ntilikina’s problem in New York has been his lack of role, which weighs mostly on the team for not developing him or putting him in any position to succeed. But Ntilikina must also bear some responsibility for not grabbing a role for himself.

Jeff Hornacek and David Fizdale did not take the time to develop Ntilikina. Both implemented a bizarre “watch and see how it’s done” approach instead of G League reps or finding stretches of games to get him some playing time. Despite the botch in development, Ntilikina has shown flashes of effectiveness given the opportunity.

This is where Tom Thibodeau becomes a saving grace for the fourth-year Frenchman. Beyond the comfort of stability—Thibodeau is Ntilikina’s fourth head coach in four seasons—Thibodeau and Ntilikina speak the same language. If there is one thing that Thibodeau can surely appreciate, it’s someone who can dig in and play some defense. Thibodeau’s successful track record with guards is an added bonus.

Ntilikina isn’t the type of point guard Thibodeau has fancied in the past; Dennis Smith Jr. better fits that need. Ntilikina, on the other hand, may have to learn a new role that requires him moving off the ball full time.

This may sound crushing to staunch Ntilikina supporters who remain convinced he is the point guard to guide this team into the new golden age of Knicks basketball—but it shouldn’t. In fact, those same supporters should be eager to see what Ntilikina can become as an off-ball tweener.

Ntilikina does not possess the raw speed and explosiveness required to be a lead guard in Thibodeau’s system. He does, however, possess the awareness and defensive chops required to find his way into Thibs’ circle of trust.

What better place to start than with defense? Ntilikina has shown more than a few flashes on this side of the floor. Defense is the one part of his game that has been consistently above average.

Ntilikina has the length, anticipation, and I.Q. to become Thibodeau’s top dog on defense, handling the toughest assignment every night. If you care to disagree, I will direct you to this clip of Ntilikina putting superstar scorer Luka Doncic in the Bastille.

Remarkably, Ntilikina has not been used nearly enough as a defensive stopper, despite his ability to shackle a player. In addition to his point of attack defense, his instincts come in handy when he works in tandem with teammates.

In this sequence he blocks Trae Young on one possession and is wise enough not to fall for a pump fake on the very next, forcing the ball out of Young’s hands.

Here's what I was talking about:

Back-to-back defensive possessions for Knicks. Ntilikina blocks Young, next time down doesn't bite on fake from same spot on the floor, instead forces the pass that led to RJ defending his former teammate Cam for the miss. pic.twitter.com/VbPoqvRxUB

Plays like that are what will keep Ntilikina fresh in Thibodeau’s mind. Possessions like the latter of those two show why Ntilikina’s full impact is difficult to illustrate. This is why God gifted us eyes.

Ntilikina not only possesses great instincts, but his frame should allow him to take on bigger wings in addition to shackling guards. This versatility was on display in a game against the Oklahoma City Thunder, where Ntilikina did well on the explosive Russell Westbrook, and also had success when he switched onto Paul George.

This versatility could allow Thibodeau to do something with Ntilikina that David Fizdale got crushed for: playing him at the three on occasion. Fizdale did a lot wrong in his time, but he was on the right track with Ntilikina. He just lacked the follow through.

THIS IS WHY YOU START HIM pic.twitter.com/KHpVO5AKpq

Given the position-less trend still popular in the league, the only issue Thibodeau should have in finding minutes for Ntilikina is how to split them up between the two and three.


We already know about the defensive prowess. Let us address the offensive concerns, which are valid, if a bit misguided.

Ntilikina’s offensive “problem” is not that he lacks talent, but direction. It is crystal clear that he is not Thibodeau’s ideal version of an explosive lead guard. It is also clear that Ntilikina is not in his comfort zone going downhill towards the rim. The solution? Shifting his offense to an area where he’s been quietly great: the corners.

Frank Ntilikina is a great corner three-point shooter. That is a pretty astonishing statement about a player with a 31.1% career average from beyond the arc, but it doesn’t make it any less true. Ntilikina shot 52% on corner three-pointers last season, per Cleaning The Glass, good enough to put him in the 93rd percentile among point guards. Since this whole piece is about Ntilikina not being a point guard, here is some context to that percentage: Wayne Ellington, seasoned sharpshooter (who conveniently turned into an ice sculpture last season) hit 50% of his corner threes.

Another nugget to be bullish on, regarding Ntilikina’s potential as a corner three specialist: here is a group of players who, along with Ntilikina, shot greater than 86% from the free throw line and greater than 52% on corner threes: Kyrie Irving, Kawhi Leonard, Paul George, Khris Middleton and Langston Galloaway (OAKAAK). Not bad company to be in.

In a perfect world, this is how Ntilikina generates a majority of his offense.

Now, he doesn’t have to be a robot who never strays away from the corners; that should just be his main place of residence. Towards the end of the shortened season, Ntilikina was refining his go-to move: a pull up jumper from just above the free throw line.

He can still dribble and handle the ball, too, especially if Thibodeau maintains the score-first archetype he typically fancies. R.J. Barrett will be tasked with point-forward duties at times, making a secondary facilitator even more important.

The combination of Ntilikina’s instincts—he may be a timid driver, but he knows how to get his teammates the ball—and familiarity could lead to some fun combinations, including the odd (men) rotation of Ntilikina and Smith sharing the floor with Barrett, Mitchell Robinson, and Obi Toppin. Ntilikina’s low maintenance demeanor as an offensive player is his greatest argument to share the floor with Barrett and Toppin, who will be tasked with scoring first and foremost.

Everything the team should be doing this season should be tailored to bringing the best out of the prominent young players the team has trusted with the future. One could argue that Ntilikina is the perfect piece to round out a starting five. Just not at point guard.

And that’s okay. Any true supporter of his knows that while Ntilikina’s position remains an enigma, he does have the talent to see the floor. Year four is a crucial one for Ntilikina, and in many ways it is the most hopeful one too. Perhaps he will finally find his piece in the puzzle.