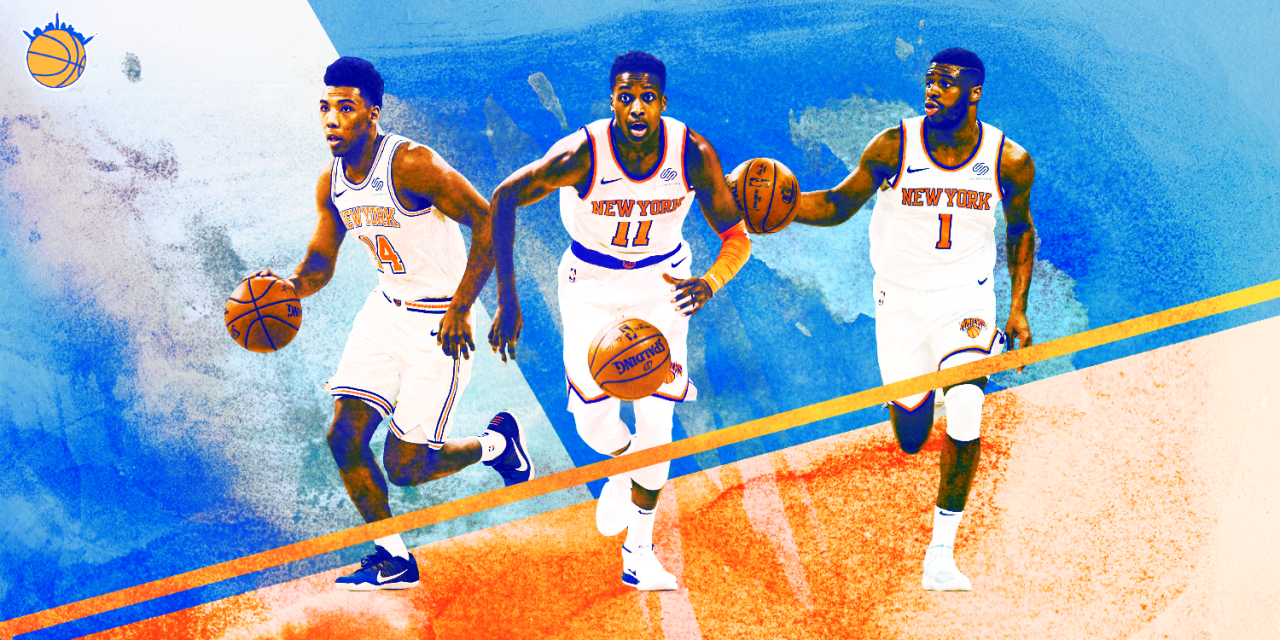 The Knicks’ current philosophy, akin to the mantra “Stay Low and Build,” started as genuinely intriguing through the first third of the season. Legitimately beginning with the signing of Trey Burke midseason, Scott Perry and the rest of the front office haven’t made great strides in terms of competitive success, but it does raise questions about the team-building process and how young players are perceived, especially in the Big Apple. For a prospect, the relationship with the concept of potential is uneasy at best, but why exactly?

Coming out of the gate, first-year lottery selections are put under the microscope. Much like their second-round counterparts, immediate contributions are among the top of the list. But at the same time, they’re rookies, the most underdeveloped of the players in the league. So, how do people tackle the cognitive dissonance between expecting elite play from teenagers and the understanding of an upward-sloping career trajectory?

Let’s look at the first year of Emmanuel Mudiay. What made Mudiay such a polarizing lottery candidate was his decision to play basketball in a professional league outside of the United States instead of opting for the traditional college route. That being said, properly scouting Mudiay was a hassle. Sure, with today’s technology it’s easy to find film on prospects, but the wealth of video out there for NCAA players gives an air of certainty and familiarity. Much said about Mudiay’s scouting and first year in the NBA can be said about Frank Ntilikina, too.

What generally separates the two and has allowed fans to shoot Ntilikina bail for his first year and Mudiay’s decidedly underwhelming rookie campaign is the player comparison. From the onset of his NBA career, Mudiay was stamped with high expectations due to comparisons to John Wall while Ntilikina was compared to the likes of Avery Bradley and Dante Exum. That’s where draft expectations begun to be warped.

Since day one, Mudiay was set to be a focal point, the leader of a rising Nuggets offense, and sooner rather than later. Ntilikina would be perhaps the third-most valuable starter at best. So, when Ntilikina was lauded as one of the best defensive point guards in the league coming off the bench in his rookie season and Mudiay was met with skepticism in a primary role where he averaged of over 30 minutes, 12.8 points, and 5.5 assists per game, it stands to reason that something may be inherently wrong with the NBA’s de facto grading scale.

These role and player comparison biases illustrate how great the distance between a seventh-overall pick and and eighth-overall pick (between two draft classes) can be perceived, even if both are 19 years old.

As unfair as this may seem, it appears that within the next two seasons these biases become moot. We just analyzed how age becomes irrelevant when comparisons and expectations take hold in a player’s rookie season. So, what happens in a player’s sophomore year in the league? And the next? Well, for everyone under 30 it boils down to the word “development.” As much as everyone invokes about the buzzword, not a lot can be concretely said about “developing” players. Did Mudiay “develop” over the last 30 games to become the refreshing, focused lead guard the league originally thought he would be? Did Allonzo Trier and Damyean Dotson do their developing during their years playing in college?

The short answer is yes, kind of. Concrete data on what makes a player go from zero to hero is non-existent, but as a narrative one thing that stands out in particular when a player makes strides is a clear identity.

Allonzo Trier is a 22-year-old rookie who has been sorely missed by his squad since succumbing to an injury. His 11.3 points and 3.1 rebounds per game average seem ordinary in a vacuum. However, the highlights made him a crowd favorite. It wasn’t just the dirty crossover, but the exceptional proficiency at the rim. Trier shoots 62.8 percent at the rim and 39.1 percent from three (per Basketball-Reference). Iso Zo knew the player he was since his first season at the University of Arizona and spent the subsequent years strengthening that identity. This has been instrumental to his NBA transition where he largely sticks to the script by getting to the rim and wisely utilizing a three-point shot.

Allonzo Trier's patience in the pick-and-roll continues to impress me pic.twitter.com/LXUAq7788Y

Dotson mostly has subscribed to much of the same. He’s been pegged as a 3-and-D specialist since draft day, which can be interpreted as limiting his role on the team but focusing it at the same time. Although he’s only shooting 36.6 percent from deep this season, he’s held his own on the floor with stout defense and efficient two-point numbers (53.7 percent).

As a second-round pick and an undrafted pickup, both Doton and Trier have met or even exceeded expectations; but Mudiay, until this current season, was cast off as a failure even though he’s two whole years younger than Dotson and the same age as Trier. It appears that expectations outweigh more level-headed tools of assessment. Fortunately, Mudiay has hit a stride in his fourth season in the NBA. At age 22, he’s averaging 14.4 points, 3.6 assists, and 3.0 rebounds per game. It’s a contract year for Mudiay, but his comrade Frank Ntilikina is in his second season and it looks like trouble if he doesn’t turn the corner soon.

Patience surrounded Ntilikina in his first season in New York. He was saved some of the vitriol by Knicks fans due to ex-head coach Jeff Hornacek’s inconsistency, but how long are fans—and the front office—willing to wait?

Is it time to buy or sell property on Ntilikina Island? In his second year, Ntilikina hasn’t shown much improvement statistically. So far, he’s averaging 6.3 points, 2.6 assists, and 1.9 rebounds on 34.6 percent field goal percentage and shooting an abysmal 29 percent from three on 3.0 attempts per game. Although we can clap and rave about his newfound aggressiveness, it matters very little if it translates to lower efficiency than his rookie campaign. Still, only 20, when is the correct time for Ntilikina to blossom? He’s accrued experience in the toughest league in the world, when exactly will it provide dividends?

In short, Ntilikina’s career path could echo Mudiay’s more closely than anyone would like to admit for a number of reasons. Considering Trier’s and Dotson’s cases, whether one is a late bloomer or not, a solid amount of development should happen outside of the NBA. It’s too late for Ntilikina to turn back now, but he can still carve out a solid identity for himself, whether that’s invigorating a career before it spirals into irrelevance at age 20 or, like Mudiay, another two years of reps, which would be the same age as a college senior.