My Next Chapter? Rewriting Kevin Durant’s Legacy in a New York Minute 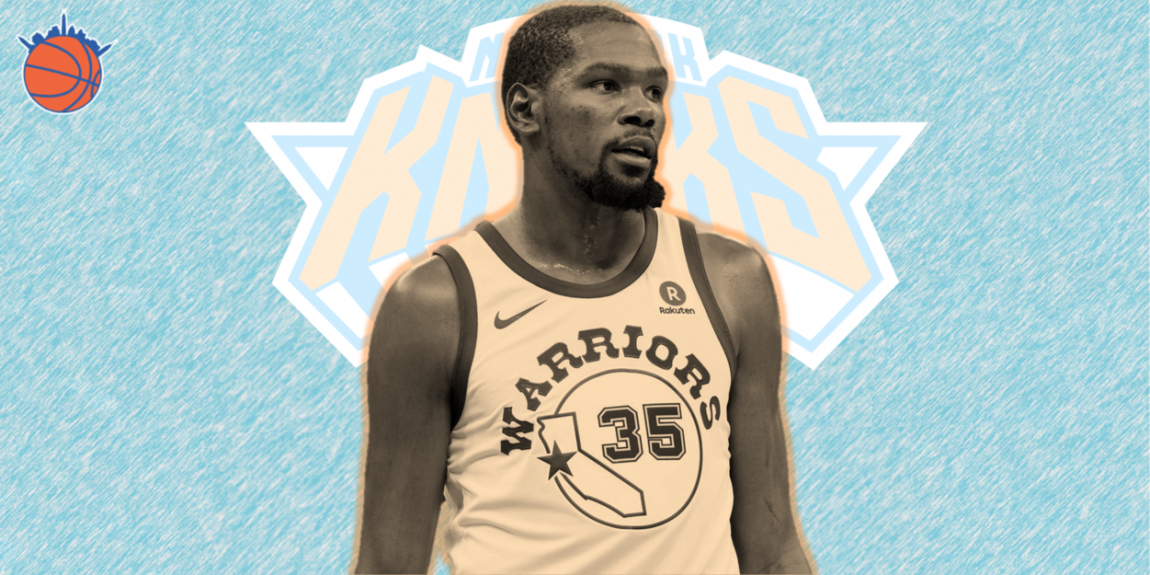 Uncertainty in Kevin Durant’s next free agency pit stop has opened the possibility of reshuffling his on-court legacy by helping the Knicks overcome noncompetitive lethargy. Why would playing in New York interest Durant?

When Kevin Durant came and conquered Rucker Park seven years ago, it felt like more than a cool offseason story. Plenty of basketball greats have made the pilgrimage to one of basketball’s most sacred courts. Durant’s 66-point explosion—eight points shy of Joe “The Destroyer” Hammond’s court-record 74 points—was the purest form of basketball euphoria.

Fans were left in such hysteria that they stormed the court during the game. His historic night doubled as one of his favorite basketball moments.

“I hit four threes in a row and ten to fifteen young kids run and jump on me, and twenty adults. I’m seeing the whole crowd run on the floor. That much love at one time was a lot. It was like a quick burst of joy that I haven’t felt on a basketball court before. It was amazing.”

That night felt less like a game and more along the lines of a religious experience. Durant came off as a basketball zealot. If you question that assertion, I’d remind you that the man skipped his prom to hoop in NYC. Despite the lack of NBA success, New York has maintained the reputation as the Mecca of basketball, with Rucker Park and Madison Square Garden standing as the cathedrals.

When Durant lit Rucker on fire, the thought of him ever making New York his permanent home felt possible only in the world of 2K. At the time, he was the backbone of the league’s preeminent rising power in OKC—who would go on to make the Finals that season—while the Knicks were prepping for their first full season with a talented scorer of their own, Carmelo Anthony.

A lot has changed since then. Durant dipped from OKC for the golden pastures of the Bay Area. The Knicks remained the same Knicks they were in 2011 with some good moments from the ‘Melo era to hold on to. It sounds crazy even typing this, but eight years later, Durant to the Knicks sounds less delusional. It actually makes a whole lot of sense.

This past summer, Durant re-upped with the Warriors on a two-year deal. That is a good indicator that he will be in Golden State when they christen the Chase Center, and given that he was present for the groundbreaking, it would be wise to assume he will be around for the inaugural season in 2019. After that, he could have his eye on a new challenge.

Decoding Durant is a challenge in itself. As Zach Lowe wrote a few months ago, even the people closest to him are not sure what his endgame is. He is chasing something, but that something is not championships—it’s validation. His father has said that Durant chases such glory not from the peanut gallery but from his peers.

Right now, the reputation on Durant is that he chose the easiest route. This has been the verdict among fans the minute his Player’s Tribune letter came across our timelines two summers ago. But with the Warriors officially entering dynasty status, you are starting to hear similar sentiments from his peers. C.J. McCollum got into a spat with Durant over the summer after McCollum called Durant’s move to Golden State “soft.”

Clyde Frazier doubled down by saying there will be an asterisk on his legacy because of it (via ESPN):

“Durant, I mean, as great a player as he is, I would still hold back because, man, he joined a team that really didn’t need him. You know what I mean?” Clyde told SiriusXM. “He’s right there with LeBron [James], probably will surpass LeBron as the best player in the game soon. But for him doing that, I still don’t give him the full credit that he probably would have deserved if he stayed with [the Oklahoma City Thunder] and won a title with that team.”

Clyde’s assessment sounds harsh, but there is no denying some truth lies within it. Durant is in prime position to surpass LeBron’s ring count within the next two seasons. Four rings would give him the edge on his mentor, but as Durant said himself, he’s not in it for the rings. He’s in it for legacy, which should be the key motivator in the next chapter of his career.

When LeBron signed with the Lakers, Durant loved it:

“I thought it was the perfect decision, perfect move, did everything he was supposed to do in Cleveland. I think this is the perfect next step for him, and he’s kinda breaking down the barriers of what an NBA superstar is supposed to be. You feel like you’re just supposed to play it out in one spot. I think he did a good job of giving different chapters. I think it’s gonna make his book even more interesting when it’s done.”

These words carry some extra weight given his relationship with LeBron. Durant has studied his idol turned rival with excruciating detail, and always keeps a close eye on his escapades:

“I don’t watch a lot of other basketball away from the gym,” Durant says. “But I do look at LeBron’s box score. I want to see how many points, rebounds and assists he had, and how he shot from the field. If he had 30 points, nine rebounds and eight assists, I can tell you exactly how he did it, what type of shots he made and who he passed to.”

His attention to detail has gone beyond the box score. Durant’s move to Golden State thrust him into the villain role, just like LeBron’s move to South Beach did. His deals have been one-and-one max deals, a trend started by LeBron when he returned to the Cavs.

Durant could choose to remain with the Warriors and push his ring count well past LeBron. In the event Durant remains in Golden State, LeBron still has the edge off the merit of his title with the Cavs. By ending that 52-year championship drought, LeBron cemented all-time status and quietly erased the move to South Beach from people’s memory.

Durant does not have a Cleveland. He could choose to stack up on rings and surpass LeBron in that department. That will not wipe away the narrative that he took the “easy route” to make sure he’s not this generation’s Charles Barkley (sorry, Carmelo). The best remedy for Durant’s problem—and I use the word “problem” loosely—is to break off on his own and prosper à la LeBron return to Cleveland.

The East Is Weak, Man

This is where the Knicks step in. There is no task more difficult than winning a title with the James Dolan Knicks. Playoff basketball has been scarce. Star players willing to come to New York have been few and far between. But things have started to change under the new regime. The stench of the Phil Jackson era has faded as has Dolan-centric PR fiascos. It is as tall a task that Durant can take on.

If you want an example of a franchise radically changing their luck in a short period of time, look at the Lakers. Five years ago, the thought of LeBron James calling Los Angeles his basketball home was laughable. A new regime of Magic Johnson, Rob Pelinka, and Luke Walton reset the foundation, and along with an infusion of lottery talent, the narrative has shifted. Scott Perry, Steve Mills, and David Fizdale resemble a similar transition for the Knicks. They have been prudent with draft picks and cap space, and are now in position for the big payoff.

Now back to Durant—why would he want to take on such a bold task? For starters, the East can belong solely to him. He’s had to deal with the gauntlet in the West his whole career. By comparison, the East is desolate land waiting to be conquered. There are still worthy adversaries—most notably the Celtics, who have built a derivative of the Warriors. Giannis Antetokounmpo should become Durant’s next great rival, and Kawhi Leonard could choose to hang around the 6 longer than we expect. Ben Simmons and Joel Embiid are poised to be the next great guard-center duo.

When you scan the rest of the East, the Knicks could have the most appealing roster. The teams at the top have their pieces in order to make a run. The teams in the middle (Wizards, Pacers, Heat, Magic, Pistons) do not have the young upside that the Knicks currently have. New York has nine former lottery picks, headlined by the recovering Kristaps Porzingis.

Then there is Kevin Knox, who presents an apprentice relationship, something Durant has not experienced in his career. Knox has modeled his game after Durant, so who better for the young Kentucky product to learn from?

David Fizdale’s vision for position-less basketball would make integrating Durant seamless. Fizdale could slot Durant at the four next to Kristaps or bump him down to the three if he chooses to deploy a Kraken lineup with Mitchell Robinson, KP, KD, Knox, and Frank Ntilikina. That’s the type of lineup that could stack up against any in the East and challenge the elite of the West.

New York also gives him a desirable destination to recruit help. In his HBO documentary The Offseason, we see Durant and Russell Westbrook fail to recruit Pau Gasol to OKC. Gasol’s main reason for not coming? Living in Oklahoma City. That is a problem he will not run into in New York. Recruiting fellow stars will not be a hard ask.

Off the court, New York presents Durant with access to any avenue of his choosing. He could build a venture capital firm like Carmelo did. He could look into film or the music industry if he so chooses. And the best part is, no matter where in the five boroughs he is, there will always be a court to play pick up at. For a hoops addict like Durant, there is no better place to spend his latter years.

For a Knicks-Durant union, certain dominoes will have to fall in order. As I mentioned earlier, Durant being on the Warriors to open the Chase Center sounds like a lock. This could end up being a blessing for the Knicks. Right now there is a subtle push for the summer of 2019, with Kyrie Irving and Jimmy Butler being mentioned as possible targets. That would require a hastier resolution to Joakim Noah’s tenure. If the Knicks were to instead wait for the summer of 2020 to make their splash, Noah’s contract will be gone for good (versus stretched over the next three seasons). It would also give that young nucleus time to develop. If Durant were to come, the team immediately pivots to win-now mode.

New York is ready for a winner and would certainly welcome Durant with open arms, just as they did that night at the Rucker. The only question that remains is, will Durant welcome New York? Depending on how the next two seasons go, Durant could hit free agency a four-time champion. Being the man to come to the Knicks and end the championship drought? That would give Durant what he always wanted—to be number one.