The Mysterious Disappearance of Noah Vonleh 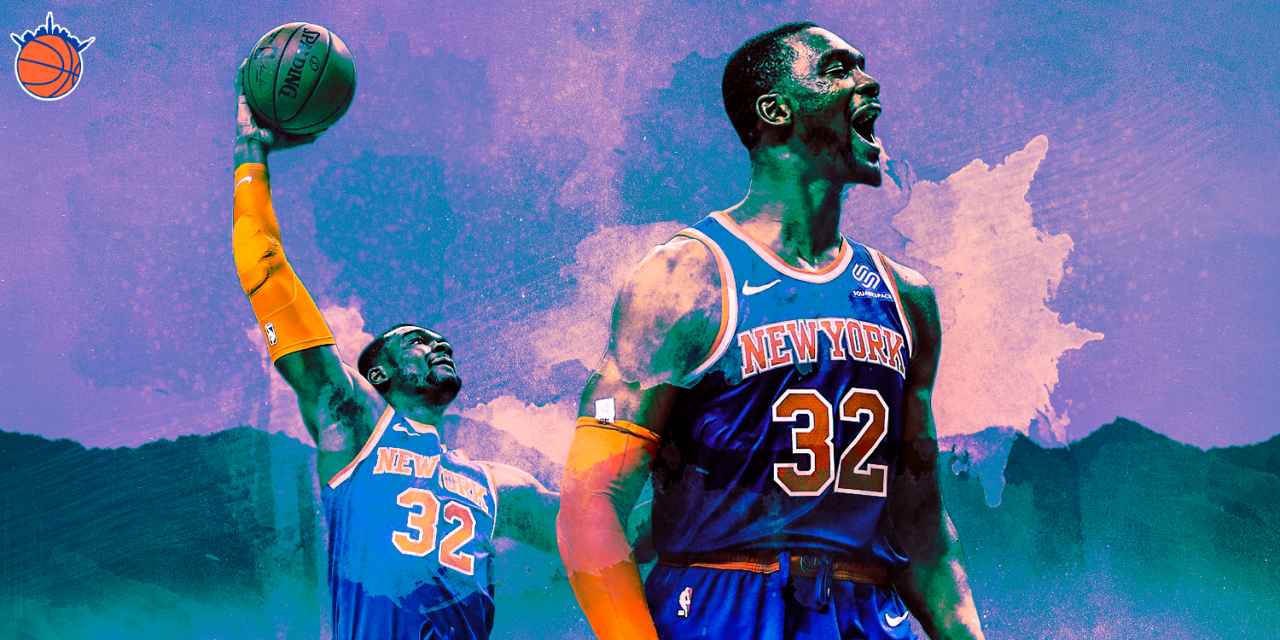 Noah Vonleh went from key cog in the Knicks’ starting lineup to an afterthought coming off the bench. What happened to one of Scott Perry’s biggest revival projects?

Six months ago, this was all a harmless chemistry experiment.

With their revolutionary, 23-year-old center rehabbing a torn ACL, and their new head coach needing time to acclimatize to the team, the Knicks were primed to use this season as an “anything goes” testing ground.

They stocked their laboratory with beakers and vials full of volatile compounds no one else wanted—the Mario Hezonjas and Emmanuel Mudiays and Noah Vonlehs of the NBA—sampling every concoction possible to get a sense of what might work when they finally got a chance to mix in what they believed to be their Chemical X: a sweet-shooting, 7-foot-3 Latvian monster.

The experiment has shifted dramatically. It hasn’t ended. But that missing ingredient is in Dallas now, which means the Knicks are stuck with all these mismatched pieces they’ve gathered (until this summer, when the pressure on this front office, both internal and external, will be greater than ever before). All the focus will be on what Steve Mills and Scott Perry can accomplish come July.

How the Knicks manage the rest of this season and, by extension, the nebulous futures of those aforementioned players (Hezonja, Mudiay, Vonleh) will have significant, long-lasting effects. If what they say is true and gods are really en route to the Mecca of basketball, it will be easy to forget about the fringes of this team.

If the Knicks fumble those non-star assets, it will become painfully obvious that those fringes were far more important than anyone thought.

Firmly entrenched in those turbulent fringes is Noah Vonleh. After bouncing around the NBA for four seasons, Vonleh found himself in danger of washing out of the league at 23 years old. The Knicks took a flyer on him this season at the cheap price of $1.6 million for one year.

It has been a moderate but unequivocal success. Even after an ice-cold month or so, Vonleh is sitting on career highs across the board—shooting a decent clip from three under the heaviest workload he’s had from out there, protecting the rim like never before, and dishing dimes that are in no way Nikola Jokic–esque but prove that, for the first time, the game is slowing down for the Indiana product

Most impressive amongst his statistical leaps and bounds are Vonleh’s minutes played, up to 25 per game—representative of a legitimate, here-to-stay rotational big. That is not something that was in the cards for him a year ago. He has grown into a competent floor-spacing “glue guy,” an identity Vonleh’s former teammate Marvin Williams built a 13-year career on.

Those aren’t empty stats, either. The Knicks are absolutely terrible, but through the madness, Vonleh has been a steadying presence on the floor. Most advanced metrics—VORP (Value Over Replacement Player), BPM (Box Plus Minus), Win Shares—feature him at or near the top of the charts for the Knicks. Coach David Fizdale even called him the team’s “most complete player” no more than a month ago.

And yet, Vonleh finds himself coming off the bench three out of his past four games, despite starting the majority of the season. Since New York’s now-notorious trade with Dallas, Vonleh’s role has drastically diminished within the Knicks’ rotation. He’s playing far fewer minutes and has lost lineup priority to the erratic Hezonja, of all players.

Maybe Hezonja is dominating practices. Maybe Vonleh’s recent signs of slippage (an ugly, bricky stretch from beyond the arc) were concerning enough to pull back the reins. Most likely though, the Knicks have deemed Vonleh enough of a winning presence on the floor that he’s now a nuisance to their tanking aspirations. As insidious and conspiracy theory-ish as that sounds, it’s a lot easier to shelve Noah Vonleh than Kevin Knox. There’s just not the same level of external organizational pressure to play him.

Still, this screams asset mismanagement. Hezonja, Mudiay, Jordan, and Luke Kornet—their other soon-to-be free agents—all remain in Fizdale’s rotation while Vonleh has vanished. It’s a puzzling development that makes little sense when you consider that Vonleh has been more consistent than half of those players, and even less when you take in his contract situation.

Vonleh will hit unrestricted free agency this summer and he’s proven himself to be worth far more than $1.6 million annually. It wouldn’t be a shock if he fields offers in the vicinity of three years, $30 million. We aren’t talking about a franchise star here, but we are dealing with a 23-year-old Marvin Williams prototype who could potentially push a playoff team over the top. Philadelphia apparently already called asking about Vonleh around the trade deadline.

Why the Knicks couldn’t work out a deal to maximize on Vonleh’s value is bizarre. They were never going to be able to pay him his worth, but with the trade deadline in the rearview, New York has essentially committed asset suicide; Vonleh will walk this summer and the Knicks will get nothing in return.

As everyone knows, yet one person refuses to acknowledge, New York will clear enough cap space this summer to sign two superstars, but that’s it. They won’t be able to properly compensate any of their in-house free agents: not Mudiay, certainly not Jordan, and not Vonleh.

All New York can realistically offer Vonleh is their Non-Bird exception, starting at 120 percent of his current salary (again, a measly $1.6 million), which can increase annually by 4.5 percent for up to four years. 23-year-old NBA players who haven’t earned any real money yet don’t sign “ring-chasing” contracts like that just to play on a contender, no matter how good the team is. Vonleh will walk.

Which means that the Knicks really should have traded him a few weeks ago. Maybe their asking price was too high for potential buyers. Maybe they were bullish on getting a first-round pick back and no front office was willing to part with that. If that is the case, the Knicks made a mistake. This is how you end up like Dell Demps, recently evicted from the tire fire that is the 2018–19 New Orleans Pelicans; dish out dumb overpays year after year for middling free agents (we’ll see if the Knicks can avoid that this summer), and let quality assets like Vonleh leave for nothing in return.

Good players ride the bench for smart tanking teams. Atlanta tried to do that with Jeremy Lin before waiving him; their team turned out to be too good to tank regardless, but anyone with eyes could suss out what they were doing with Lin.

If the Knicks wanted to do the same with Vonleh, they should have done it before the trade deadline. He has played himself into a contract they cannot afford this offseason, and if tanking was always the goal, they should have pulled the plug as soon as Vonleh started showing flashes. To do it now, while continuing to play upcoming free agents like Mudiay when Vonleh has offered similar on-court production, is bizarre.

Flip the script. If the Knicks wanted to get a better haul for Vonleh than whatever they turned down at the deadline, they should have played him a lot more than 25 minutes a game.

Mitchell Robinson is on a rookie contract; he isn’t going anywhere. It is clear now that, after waiving him, Enes Kanter never had a future on this team. Why not feature the crap out of Vonleh to up his value so high that you’re guaranteed a first-round pick or some other juicy asset for him in a hypothetical trade?

Where New York settled is somewhere in between—a clear sign of the kind of indecisiveness that spells front office confusion in small, easy-to-miss font.

Mills and Perry are owed some sympathy here. It’s not easy to determine the future of young players like Vonleh on the fly, especially with all the chaos surrounding the team right now. Losing Vonleh for nothing this summer is a paper cut, not a laceration. But this is how the Knicks became “the Knicks”—death by a thousand little self-administered cuts, adding up to one of the most incompetently run franchises ever.

Back to the question: why is Noah Vonleh, the Knicks’ “most complete player,” riding the bench all of a sudden? Perhaps because the front office realized they couldn’t get what they wanted for him at the deadline and, in a desperate attempt to deflate his value so they can keep him with a low-ball offer this summer, have forced Vonleh into invisibility. 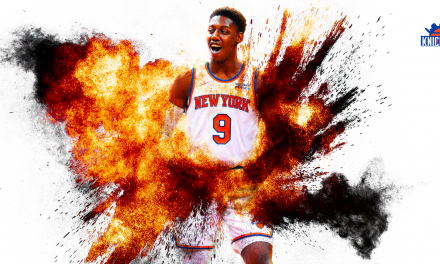 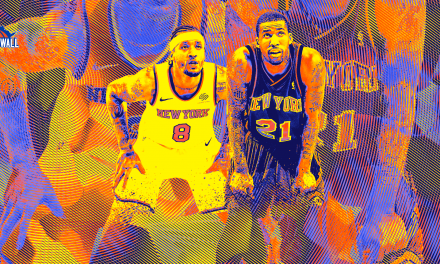