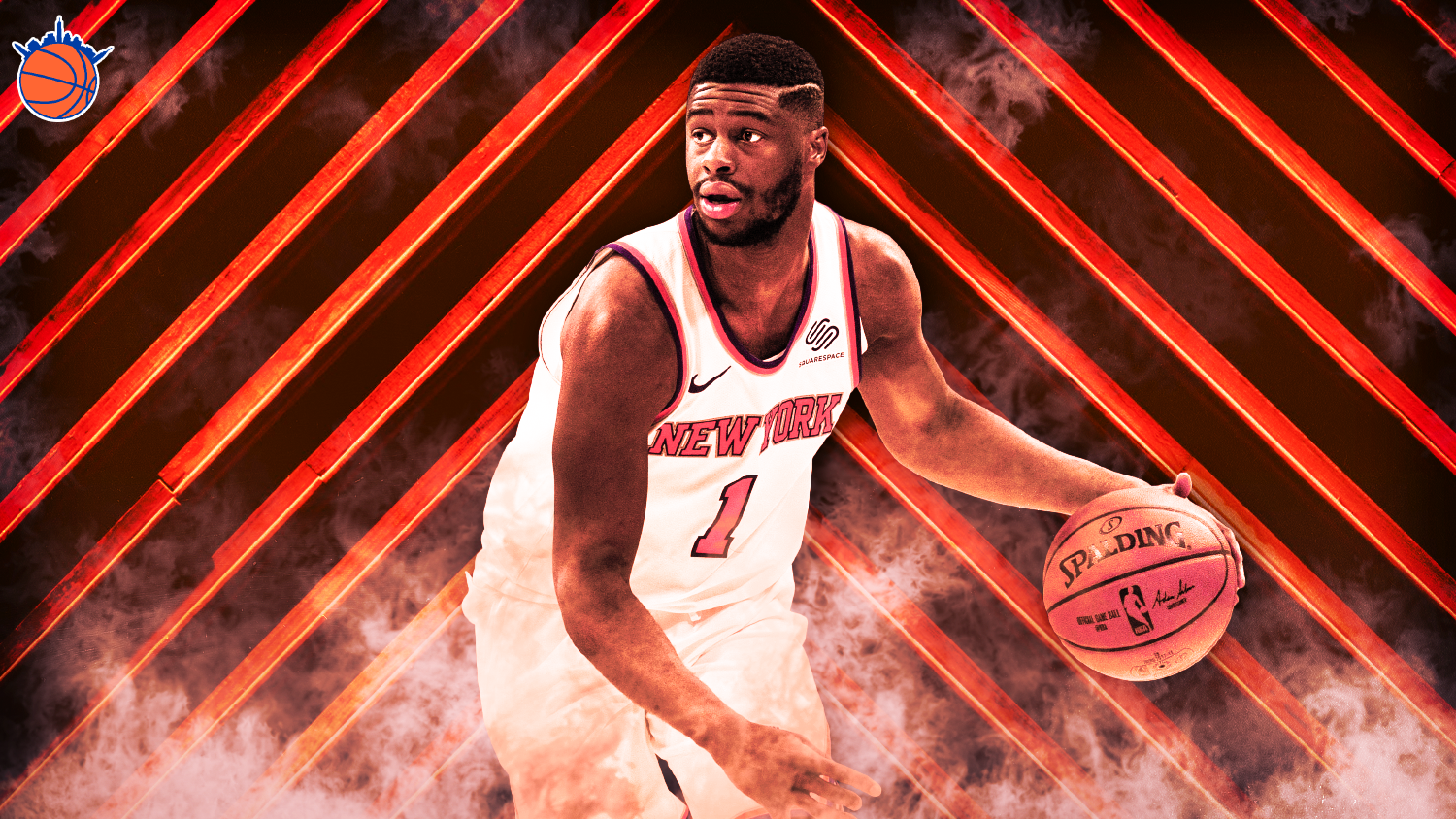 Dubbed the “next Russell Westbrook,” former lottery pick Emmanuel Mudiay is losing a grip on his basketball future.

Remember those holographic Pokemon cards that that would transform if you tilted them at a certain angle? For example, on one of those cards you’d see an Eevee if you looked straight at it, a cute but useless Pokemon. But if you turned the same card on its axis it became Jolteon, who is also cute but can shoot lethal lightning bolts out of its face.

That’s Emmanuel Mudiay. Look at him one way and he’s got all the tools—size, strength, fluidity, composure—to be one of the better two-way guards in the league. Tilt your head slightly, and he’s one of the bigger busts of the last decade.

The mix, posted when Mudiay was a rising senior and the second-highest ranked high school player in the country, has over 1.2 million views now. In the video description, Ballislife claimed Mudiay had “Russell Westbrook type athleticism,” and it was hard to disagree at the time. I remember watching the clip my freshman year of college: nestled into my Twin-XL bunk bed, I let slip a weird, feral noise when I first saw Mudiay throw down a windmill dunk at 16 years old. My roommate, who had been sleeping, didn’t share my excitement.

It has not gone to plan for Mudiay. While all of his high school peers—Jahlil Okafor, D’Angelo Russell, and others—starred in big collegiate programs, Mudiay chose to play in the Chinese Basketball Association on a one-year, $1.2 million deal with the Guangzhou Tigers to offer immediate support to his family. Not only did he get less media coverage and exposure to NBA scouts, but Mudiay also went down with an ankle injury early into the season, effectively ending his CBA career after six games.

The Denver Nuggets still took him seventh overall in the first round of the 2015 NBA Draft, a testament to how well-rounded and big-league ready Mudiay seemed. His rookie season was encouraging despite two major holes in his game: turnovers and bricky shooting. His feel for the game, rebounding ability, and knack for pushing the ball in transition all translated to the NBA. It felt like a matter of time before Mudiay was a perennial All-Star, as Ballislife had so boldly proclaimed (in very SEO-friendly, “clickbait-y” fashion).

His sophomore season was one long, brutal plateau. Mudiay added nothing new to his game. He played fewer minutes. His defense was unremarkable for a guard of his size and mobility. His assist numbers went down. His true shooting numbers improved, from 43 percent to 48 but were still well below average. He remained loose with the ball. Most importantly, he looked like he was overthinking things at times instead of playing freely. Pundits didn’t question Mudiay’s progress as much as they stopped talking about him altogether.

The NBA is cruel sometimes. You can be crown prince one day but a pauper the next. Over the next two years, Mudiay quickly found himself on the wrong end of that spectrum. His game went nowhere fast as he failed to make significant improvements, and the Nuggets raked in new talent. Coach Mike Malone uncovered a gem in Nikola Jokic, among the anointed “Unicorn” class of NBA big men, who had more chemistry with guards Jamal Murray and Gary Harris than Mudiay. At the age of 21, just three years after being compared to Russell Westbrook, Emmanuel Mudiay was seemingly racking up more “DNPs” than points.

Denver pulled the plug. After a three-team trade with Dallas, Mudiay got the fresh start he needed with the New York Knicks. There was no Murray or Harris to vault over; these were real proving grounds, an equal-opportunity chance for Mudiay to compete with the likes of Trey Burke, Courtney Lee, a rookie Frank Ntilikina, and Jarrett Jack. This was a backcourt rotation chock-full of journeymen, unproven young guns, and outcasts like Mudiay.

“We welcome Emmanuel to New York and are excited to add this young player to our roster,” Knicks GM Scott Perry said regarding the Mudiay trade. “He is a young, athletic guard who we feel will be a valuable addition to the Knicks moving forward.”

How did Mudiay respond? With energetic, physical play, and the worst shooting of his already inaccurate career. His three-point shooting dropped to 19.6 percent on 2.1 attempts per game. His free-throw shooting fell to 68.6 percent, closer to his career average of 73.1 percent than the career-best 80.8 percent he shot in Denver prior to the trade. Mudiay looked more confident finishing around the rim, but he couldn’t find his rhythm through his first quarter-season in New York.

Mudiay did a thing! pic.twitter.com/MkHkMkTJZM

This season is “do or die” for Mudiay’s NBA career. It seems a little drastic to say, since he’s played only 23 games in a Knicks uniform (Mudiay missed the start of the season due to an ankle injury, and is set to return soon), but it’s the truth. The Knicks have a fiery new coach in David Fizdale, who has repeated again and again that playing time on this team will be governed by meritocracy. Contract size does not matter. NBA pedigree does not matter. No one is guaranteed floor burn. If Fiz is a man of his word and if he has the trust of Scott Perry and team president Steve Mills—and I believe both of those ifs to be true—then players will have to earn minutes on this team. The only player I’d be shocked to see fall out of the rotation would be Kristaps Porzingis when he returns from his ACL tear, and even he should ride the pine if he isn’t playing productive basketball.

This is a blessing and a curse for Mudiay. Playing for the Knicks, on this particular team with all the opportunity there is for any player to shine, could be the saving grace for his career. At the same time, he could get pushed off center stage; the roster is bursting with young wolves, hungry to jumpstart their path to NBA legitimacy. Mudiay needs to capitalize. He won’t find a better chance than this.

Mudiay has said all the right things so far. The NY Post reported that he lost 10-15 pounds since the end of last season, and he claims he’s “running faster, more explosive, [and] getting to [his] areas on his first step.” Mentally, he’s confident that he can do what he couldn’t in Denver: play with joy, creative freedom, and flow. “I really haven’t been thinking about turning over the ball,” he told the Post. “I’m going out there and being aggressive and I know you have to take care of the ball. [Coach Fizdale] has already said if you make a turnover, it’s on to the next play. Don’t dwell on it.”

Fizdale is equally aware of the crossroads his new point guard faces now. “The games I watched [of Mudiay] he hit a point where his confidence crumbled,” Fizdale told press before the preseason. “So every decision he was questioning [himself]. He was indecisive every time he put the ball on the floor, he wasn’t sure what play to make. … After a lot of talks and a lot of time spent [with him], him understanding how much confidence I have in him, and how I’m going to let him play through some mistakes, he’s taken that to heart. He’s really taken care of the basketball and [done] a good job of that stuff.”

Again, this is Mudiay’s best shot. One of our editors (shout-out Reid) called this season “Last Chance U” for Mudiay, and I couldn’t agree more. We know two things about Mudiay’s career so far. The first is that Mudiay could very well end up having a long, fruitful career as an NBA starter, a two-way force that almost every team would want to sign to a long-term contract. The second is that his journey could end faster than anyone thought imaginable for an athletic, 6-foot-5 guard that looked destined for greatness at 17 years old.

For now, Mudiay remains a mystery of perception—a player with two clear-cut career paths going in opposite directions. Look at him head on, and you see a prospect that has not improved after three disappointing seasons, someone that might have to make an indefinite return to Chinese professional basketball. But if you tilt your head a little, you can just make out the light at the end of the tunnel.

There’s still time for Mudiay to emerge from the New York spotlight a new man and put his stamp on the NBA.