Age of Extinction: Is NBA Natural Selection Leaving Enes Kanter in the Dust? 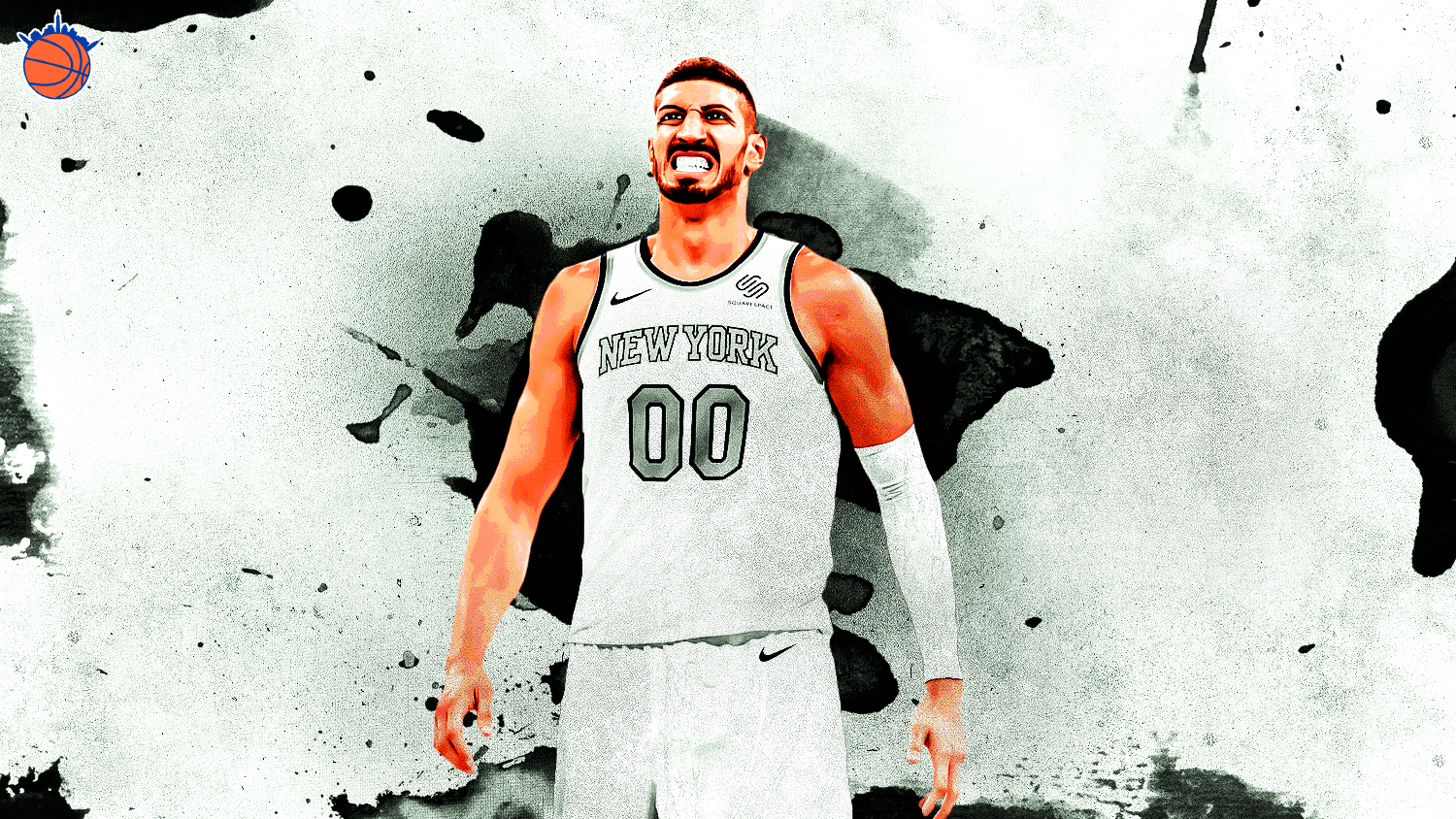 While Knicks center Enes Kanter can still put up awe-inspiring numbers in the declining big-man era, he’s a sieve on defense, and may be the last of a dying breed.

On May 8, 2017, the Golden State Warriors beat the Utah Jazz 121-95. It was the Warriors’ fourth win of the series, completing their sweep of the Jazz.

It was also their first postseason with Kevin Durant, a player whose signing marked the most ridiculous wealth of riches for any team in modern NBA history—well, really a wealth of one particular resource: shooting. Golden State, to the dismay of every other team, paired a seven-footer with guard-like skills who can make any shot imaginable with the most accurate backcourt of all time. The only way to beat them was to be able to at least dabble in a three-point shooting contest, and we saw the entire league adapt by shooting more threes and playing with more pace as a result. The Jazz, in the aforementioned game, shot 27 threes, one more attempt than the Warriors that night.

We’ve gone even deeper down the rabbit hole since then. Exactly twelve months after that sweep against Utah, the Warriors played the Houston Rockets in the conference finals and averaged over 70 three-point attempts combined during their seven-game series. As a result, most old-school, live-around-the-rim, post-up centers are going extinct.

Which brings us to Enes Kanter.

In late September 2017, the Knicks traded Carmelo Anthony to Oklahoma City for Kanter (and Doug McDermott, who’s now in Indiana). It was the first move for the team’s new front office, run by Steve Mills and Scott Perry, and it’s indicative of how far their vision has come since acquiring Kanter. Long gone are the days of signing a lumbering center to a bulky contract. Mills and Perry are now known for stock-piling wing and guard prospects that fit Golden State’s “Big/Small” prototype, multifaceted guys like Kevin Knox, Dotson, Ntilikina, Allonzo Trier, and Mario Hezonja. Most of those players won’t net home runs for the Knicks. Some of them may even backfire, but if you squint your eyes you can just make out the kind of team Mills and Perry are building: fleet-footed, position-less, modern.

So, why would an unconventional front office trade for a highly-conventional big man on a multi-year contract? Kanter, no matter how well he plays, will never fit into the equation here in New York. Even as a sixth man, he is too one-dimensional. That isn’t to say that Kanter is an unproductive NBA player. He had a monstrous 23-point, 24-rebound, seven-assist night in a double-overtime loss to the Chicago Bulls the other night. …

… It’s just that stylistically the Knicks are rife with athleticism, versatility, speed, and Kanter has none of those qualities. Even when he’s playing well, he sticks out like a giant seven-foot sore thumb. Before that Bulls game coach David Fizdale actually benched Kanter, and the same trade rumors that have plagued his whole career flared up once again.

Kanter’s still only 26 years old. He could very well be a part of Mills, Perry, and Fizdale’s vision for the future of this team. But I’d bet he was only ever a stopgap, a positive locker-room presence and a dependable night-to-night player that would inadvertently help the Knicks tank while they rebuilt. Now that the rebuild is starting to pick up steam, I’d also bet that the writing’s on the wall for Kanter. Fizdale has already swapped him for Mitchell Robinson in the starting lineup, a big shift in role for Kanter who started all of last season. It’s not about Kanter playing poorly, it’s about the evolution of the center position in the NBA. Robinson is wildly unpolished on both ends of the floor, but his combination of length, speed, and off-the-charts athleticism automatically qualify him to play more minutes than Kanter. Robinson has the tools to switch on the perimeter, play the “Tyson-Chandler-if-he-got-bit-by-a-radioactive-spider” role every team covets from a young big man, and just looks the part of a modern NBA center in ways Kanter never will. Robinson isn’t quite ready yet, but if he ever shows he can consistently play mistake-free basketball, the Knicks will look to trade Kanter.

I don’t know if that is the right move. Judging any Kanter trade will obviously depend on what kind of market there still is for a player that seems more obsolete by the day. This is the last year of his contract, too, with an $18.6 million cap hit this season before hitting unrestricted free agency next summer. One thing I do know: letting Kanter walk for free would be a mistake.

If you look at the box scores, it’s easy to see Kanter’s value. He’s averaging 15.4 points per game along with 11.7 rebounds. He’s also shooting a healthy 83 percent from the line, and averaging a career-best 2.3 assists (!). Around the basket Kanter is as efficient as ever, sporting a 60 percent True Shooting mark. He’s still raking in offensive boards at an elite rate, and on the defensive glass he’s outpacing guys like Steven Adams and Nikola Jokic.

Still, despite his offensive gifts, which are more polished than ever, Kanter just can’t overcome fit issues on this team and I doubt he ever will. He’s a niche player. He can’t credibly set a flare screen, so any action with him clogs the paint:

His big game against the Bulls, easily his best of the season, came against a short-handed Bulls team that plays Jabari Parker big minutes at power forward. Wendell Carter Jr. has impressed as a rookie, but he has a lot to learn about interior defense in the NBA. It was a perfect storm for Kanter to go off.

Therein lies the rub with Kanter: if the league were still tailored toward his skill set (think: Shaq/Tim Duncan/Dwight Howard-era of post-up offense), he would go off almost every night. But the NBA isn’t played at that speed anymore. The perfect storm rarely comes around for Kanter.

Pair that with his defensive limitations, and the off-chance of that perfect storm isn’t worth the risk of playing Kanter 30-plus minutes a night. Again, the numbers aren’t that bad. Sure, Kanter doesn’t create chaos or turnovers on defense (0.5 steals/0.5 blocks per game, right in line with career averages), but he’s actually friskier than you’d expect on that end. Opposing teams shoot around 65 percent around the rim when Kanter is on the floor, and although that seems high it’s almost exactly what Willie Cauley-Stein, an early success story this season, is doing over in Sacramento with nearly identical court time. Sometimes, Kanter looks like he knows exactly what he’s doing within New York’s defensive schemes:

The issue with Kanter is that he can only play one style of defense because of his lack of mobility on the perimeter. He’s not Al Jefferson-level stationary; watch him play and you might even be expressed at how quick his feet are for a man that size. But he doesn’t have the lateral top-speed or athleticism to do anything against pick-and-roll offense other than help “mush” the action.

Note: “mushing” a PnR involves corralling the ball-handler away from the screen while walling them off from the paint by dropping the big-man defender back, like so…

Kanter can never be aggressive defending a pick-and-roll. He can’t initiate a trap (although that’s gone by the wayside in today’s league), can only passively hedge, and even when he drops back he’s still liable to get burned by a quick, confident guard. Really all Kanter can do against PnR is drop back, go under screens, and try to use his size to keep everything in front of him — aka “Lay and Pray.” Kanter is a “containment” style defender, and that isn’t a formula for defensive success anymore which is why we’re seeing Robinson, a more versatile defensive player, steal Kanter’s minutes despite Robinson’s rawness.

It’s not over for Kanter. He’s a tenacious rebounder, automatic around the rim, and tries hard on defense (although it doesn’t amount to much). By all accounts, he’s a fiercely loyal teammate and a good person, too. But the league has outgrown him.

It’s a strange dilemma to have with a player. Usually, 20-something NBA talents fall off because of catastrophic injury (see: whatever the heck is going on with Parker) or chemistry issues (see: whatever the heck happened to Parker in Milwaukee). There’s always an element of mystery when the league starts to turn on a healthy, statistically prolific locker-room boon like Enes Kanter.

But if you take into account all the variables—the Knicks building a roster of two-way players and Kanter mucking up the floor geometry that creates—it makes perfect sense. Kanter understands his role, and executes it well. It’s just that his role isn’t enough anymore. Teams that play the opposite brand of basketball as Kanter are doing too well for him to thrive. He’s a microcosm of the death of traditional big men. I almost wonder if he would have been a borderline All-Star 15 years ago.

That was a different time. The epoch of size and stability is over. The NBA is run by Velociraptors now, and lumbering dinosaurs like Kanter are going extinct.