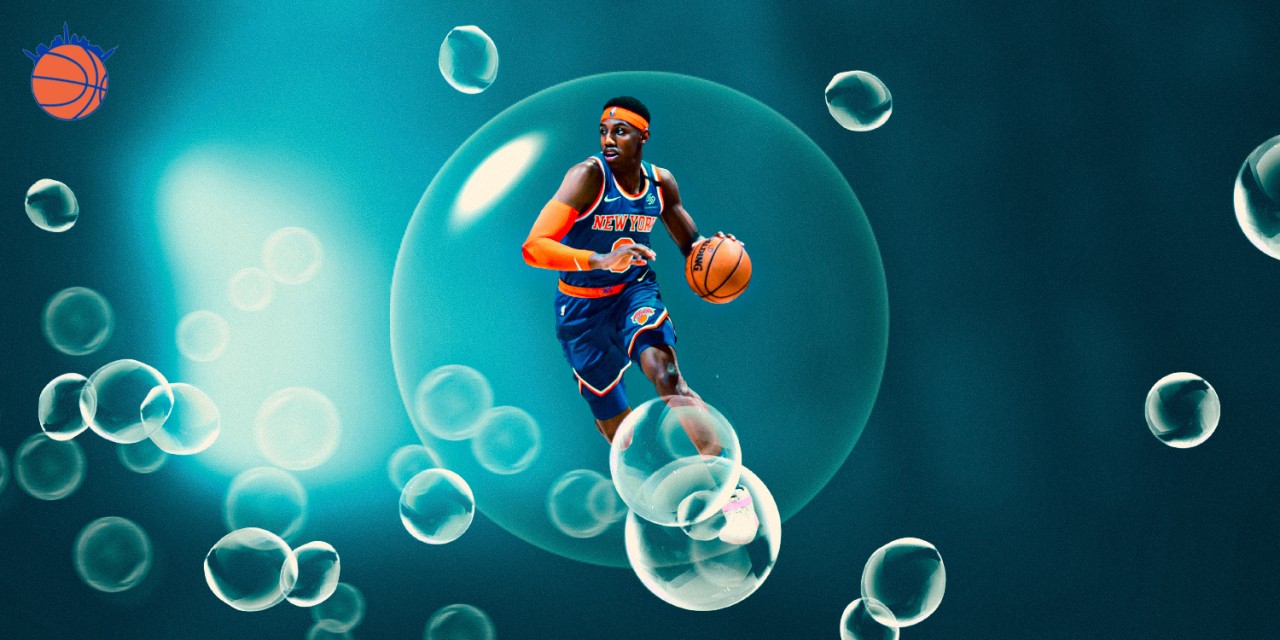 Due to the COVID-19 pandemic, the Knicks could be off for over nine months. The proposed second NBA “loser’s” bubble could help out during the long layover.

The 22-team NBA bubble in Orlando currently looks to be trending towards an overwhelming success. Players are being held accountable for their actions inside (and if you’re Lou Williams, outside) the bubble, which has led to no current cases of COVID-19, and multiple successful scrimmages leading up to Thursday’s restart.

The only major issue with the bubble is that it’s an unfair disadvantage to the eight franchises that aren’t in the bubble: the Charlotte Hornets, Cleveland Cavaliers, Detroit Pistons, Minnesota Timberwolves, Golden State Warriors, Atlanta Hawks, Chicago Bulls, and New York Knicks. In order to mitigate this problem, the NBA is planning on creating organized practices, workouts, and scrimmages for these eight teams not in the bubble at some point in August and September.

According to Rick Bonnell of the Charlotte Observer, this would include a week of practices at individual team facilities, and then group workouts in different hub cities, where the teams in each hub would have organized scrimmages. While nothing is finalized yet, it’s hard to imagine the NBA won’t pass this through, given the fact that they’ve gotten the Orlando bubble to work—a much more difficult process.

If these “Delete 8” bubbles do end up happening, then it will provide three tremendous benefits for the New York Knicks.

1. It Breaks Up The LONG Offseason

The Knicks played their last game on March 11th, where they beat the Hawks 136-131 in overtime. Assuming the NBA tips off its 2020–21 season on Christmas, and the Knicks are playing that day, then it would be nine and a half months between their last and first regular-season game.

Normally, it’s approximately six months between regular season games, so if the NBA does tip off on Christmas, that makes the offseason extended for the non-bubble teams by over 50%. This Delete 8 plan would at least give the Knicks competitive basketball games to play in this long window of time.

Usually in July, about midway through the end of the last regular-season games and the season opener, there’s the NBA Summer League. However, the Summer League is usually only featuring rookies, an occasional second-year player, and G League players trying to make the team.

While there would certainly be players that would opt out of the Delete 8 plan like some did with the Orlando bubble, we could assume that all of these eight teams will likely bring near-full rosters to the hub cities with them, given the extended length of the offseason. This wouldn’t just feature young players and G League players, but also the veterans like Julius Randle and Reggie Bullock.

The main areas of interest are going to be the free-agents-to-be like Maurice Harkless and Damyean Dotson. Those players are technically on the roster until the offseason begins in October, but will they opt out given their impending free agency? It should be fascinating to watch.

Overall, this Delete 8 plan will allow players to remain in great condition during the long offseason, while giving each team time to build chemistry as well.

2. It’s a Great Time to Develop Young Players, and Evaluate What You Have

The primary goal of any NBA rebuild is to develop young players and for the Knicks, this Delete 8 plan would give them more time to do that. This will give R.J. Barrett, Frank Ntilikina, Mitchell Robinson, and Kevin Knox an opportunity to play together against NBA competition before the start of next season.

It will also give a player like Dennis Smith Jr., who averaged career lows of 5.5 points per game, 2.3 rebounds per game, and 2.9 assists per game on 34.1% from the field, an opportunity to try and find his game again. Additionally, players like Ignas Brazdeikis, Kenny Wooten, and newly signed Jared Harper will see playing time against NBA talent. These are three players who spent most of the year in the G League, but may very well see themselves on the Knicks roster in 2020–21.

Another name to keep on eye on is point guard Lamar Peters, who played the entire season with the Westchester Knicks. Peters averaged 17.7 points per game and 7.2 assists per game while shooting 40.4% from beyond the arc last season for Westchester. If rosters are expanded like they are with Orlando’s bubble, then Peters is a name that you can see going with the Knicks to a hub city.

The Delete 8 plan would certainly give the Knicks everything they would have had with a normal NBA Summer League plus more in terms of developing young talent. Young talent that wouldn’t normally play in the NBA Summer League will likely be in attendance in addition to the young players on the roster bubble, and that’s valuable to a team like the Knicks.

The Knicks hired Tom Thibodeau as their head coach on Sunday afternoon, and the Delete 8 scrimmages should be the perfect place for him to get ahead. One of the reasons many people like the Thibodeau hire is that he is known for coaching defense and therefore could get the most out of Ntilikina and Robinson.

Additionally, it’s harder for young players to learn a new system than it is for older players. For a Knicks roster consisting of mostly younger players, they’ll now have more time to acclimate themselves to Thibodeau’s system.

Another reason this could be helpful for Thibodeau is the fact that there may not be a preseason in 2020–21 due to COVID-19. We’ve seen the NFL already pull their preseason from the schedule. Although the NBA preseason would still be three months after the NFL’s, it’s possible that the NBA could do the same, or at minimum shorten it to decrease travel.

Giving Thibodeau and the Knicks this opportunity to play scrimmages in August and September would make a no preseason possibility a lot less worrisome.

»READ: What to make of the Knicks’ Theo Pinson and Jared Harper additions