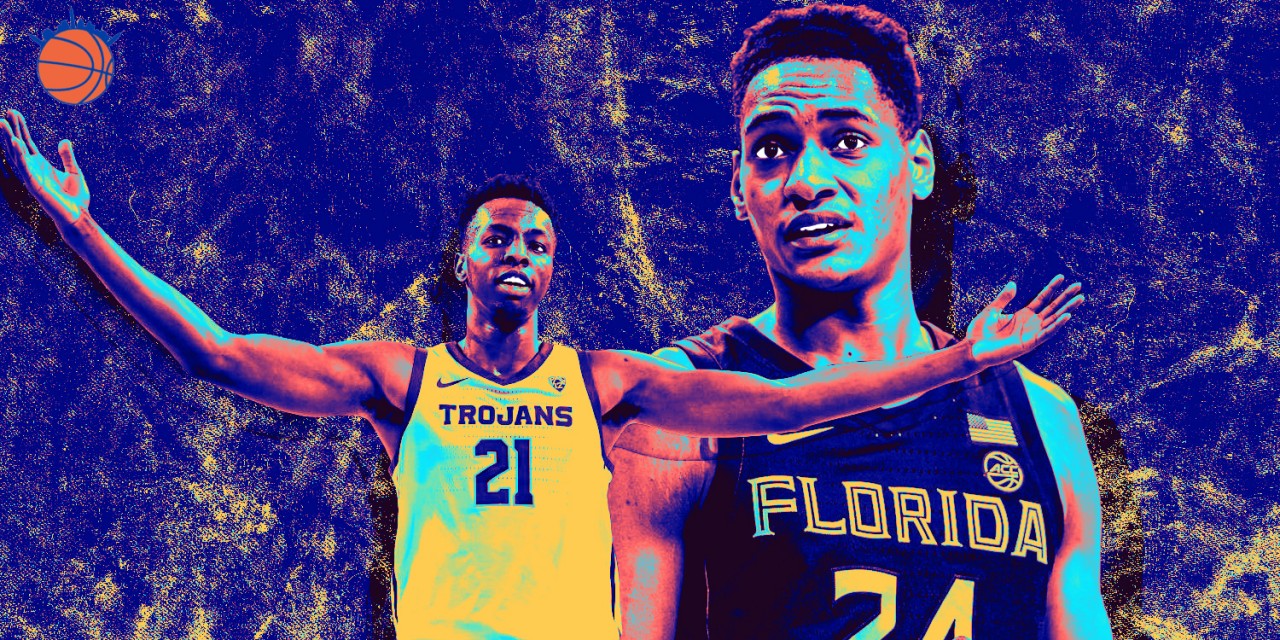 The Knicks have to decide if they want an NBA-ready player that fits the franchise in the draft or a prospect with the highest ceiling at 8.

Drafting is much more akin to an art. Teams try to walk the delicate tight rope of positional need, best player available, and potential to set themselves up for the best possible future. The higher the pick, the more likely a team is to succeed in the draft (meaning, hitting on a star), but there are no guarantees.

With the eighth overall pick, it is not likely that the New York Knicks will find a transcendent player who will transform the franchise. Instead, the team should pursue one of two options: 1) select a complementary piece that fits the team’s timeline and reduces the team’s weaknesses, or 2) trade the pick to try to acquire a transcendent player or more assets to better prepare the team for the future.

Selecting a Player at Eight

Obviously, this metric favors players that have been in the league for a longer time as they have had more opportunity to accumulate win shares. Still, the main takeaway from this list is that no matter how big you swing with the eighth pick, it is not likely that you will find a player that will change your franchise.

That is not to say that a team cannot make a valuable pick at eight. Rudy Gay and Jamal Crawford added offensive force to their teams for decades. Kentavious Caldwell-Pope is a key starter on an NBA Finals team. Collin Sexton has untapped potential and continues to improve as a scorer. Many, including me, still believe Frank Ntilikina can contribute to winning basketball.

The Knicks have never really favored one singular draft strategy. The team does not define itself by always drafting the player with the highest potential. With a new front office, it is even harder to predict what the team’s strategy will be this year.

Based on what we’ve seen out of the eighth pick in recent years and the Knicks’ timeline toward competing at a high level, if the team is not able to pursue a favorable trade, it makes sense for the Knicks to select a player who has a combination of NBA-ready skills and room to grow. Out of players likely to be around at eight, Isaac Okoro and Devin Vassell fit this mold best.

The key here is that both have high floors as NBA players, Okoro due to his elite athleticism and defensive prowess and Vassell as a top-tier 3-and-D prospect. Forgoing these players to select someone with higher potential would be repeating the mistakes of 2018 draft, where the Knicks selected Kevin Knox over the more NBA-ready Mikal Bridges, who ended up being a key contributor for the Phoenix Suns this season. Both Okoro and Vassell also fit the Knicks’ timeline, as they can come in and complement R.J. Barrett and Mitchell Robinson while developing key areas of their games (Okoro needs to improve as a shooter while Vassell could use work on his off-the-dribble creation).

While the Knicks did not necessarily luck out in the lottery, the team is fortunate that this draft is mediocre at the top and value can be found in the middle of the lottery.

Making a selection at eight is not the only avenue Leon Rose and the new Knicks front office can pursue. Scouts can do nothing but speculate how a prospect’s pre-draft endeavors will translate to the NBA game. This means the draft is all about perceived value. If the Knicks do not perceive that they can get value by making the eighth pick, they should move the pick to either better set themselves up for the present or future.

If the Knicks see their guy but know he will not be available at eight, it makes sense to move up. I do not believe there is a guy in this draft that the Knicks should give up anything beyond their 27th overall pick. That package will not get them very far. For context, last year the Atlanta Hawks had to package the eighth, 17th, and 35th overall picks to get the fourth pick while taking on Solomon Hill’s expiring contract.

The eighth pick can be a piece that edges an opposing team to make a trade. The Knicks could use test the waters on a package of the eighth pick and Julius Randle to get a player who fits better with Barrett and Robinson. The Knicks also have smartly left open a lot of cap space in a league that is about to enter a very dicey financial situation. This means they will likely have lots of teams trying to make deals with them and the eighth pick could play a key part in getting significant deals done.

Given that the team’s two franchise centerpieces, Barrett and Robinson, are very young, the pick could also be used in a package to better set the team up down the road for when Barrett and Robinson are more ready to compete. I wrote the following about trading back in this draft when writing about the lottery earlier this summer:

“Trading the Knicks’ guaranteed top-10 overall pick this year and not receiving a different high selection in this draft radically changes the Knicks’ timeline toward success. In a draft where it is difficult to get super excited about any particular prospect, trading back could be a wise move if New York believes they will not sacrifice value this year and can continue to build upon the stock of draft picks the organization already has.”

Now that the Knicks know they will be selecting later in the lottery, it does not seem like selecting at eight will accelerate the team’s timeline toward competing. Should Rose choose to take a slower approach, forgoing this pick in favor of acquiring additional assets could be helpful towards the Knicks’ rebuilding effort.

The Knicks’ organizational blunders in the past have made it so that whiffing on any draft pick is not permissible. With a winning percentage of under 30% over the last three seasons, the Knicks’ front office has no room for error. The two most likely ways to ensure that this eighth pick will benefit the franchise are by selecting someone with a high NBA floor and potential to achieve a high ceiling or by moving the pick to better set the franchise up now or in the future.

»READ: The Knicks Wall 2020 Draft Board — the aftermath

»READ: For the Knicks, moving into the the NBA Draft’s top three needs a reconsideration