NBA Draft Reaction: The Knicks Call an Audible, But It Should Work Out 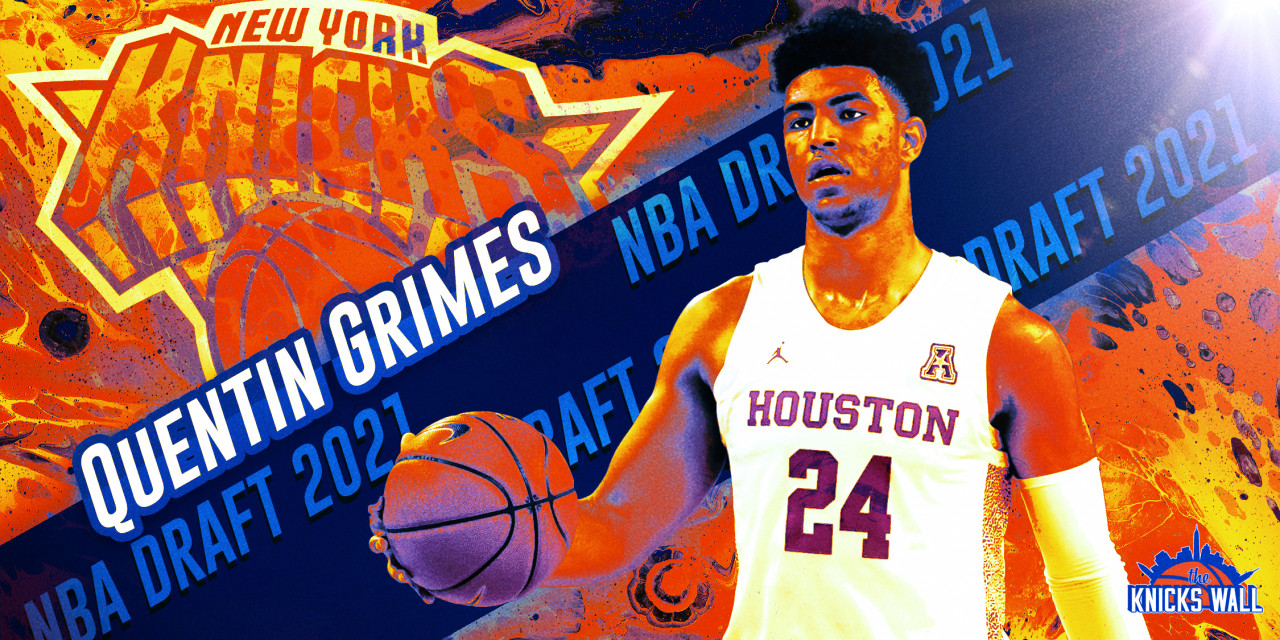 Once again the Knicks shook up the NBA Draft with not one, not two, but three trades. Still, they selected four players. TKW draftnik Nick Carannante breaks down the picks.

As cliché as it is: what we learned from the second draft of the Leon Rose era is to “expect the unexpected.” For the second straight year, the Rose-led New York Knicks front office has been one of the most active teams in the draft. The Knicks started with three picks in the top 32 and after three trades, they ended up with three picks in the top 36 as well as an additional two future assets.

While it can be frustrating at times to watch the Knicks trade down with so many enticing prospects available, there was a clear plan with the picks, no matter how many trades. New York was unable to trade up to take players like Chris Duarte (13) or Tre Mann (18), but they were able to trade down and grab the guys they wanted at 10-15 spots lower than anticipated.

So, let’s break down the four newest members of the New York Knicks.

After trading out of 19 and trading down from 21, the Houston Cougar was the first pick of the night for the Knicks at 25. This is the pick that I have the hardest time being excited about, especially with the other players still on the board. We do know, however, that Leon Rose is going to take his guy regardless of draft projections and we saw the benefits of that with Immanuel Quickley, also selected at 25 last year. There are plenty of things to like about the 21-year-old wing and it is easy to see why Knicks fans were easily able to talk themselves into this being the right pick.

The former Kansas Jayhawk is a potentially lethal shooter, and if you believe in the jump shot at the NBA level, there is no reason to think Grimes cannot be a solid role player. He shot 40% from beyond the arc on an impressive 8.3 attempts a game as a junior with Houston, which is a massive leap in both attempts and shooting percentage from his sophomore campaign. This speaks to the work ethic and way that the 6’5″ wing changed his game after transferring from Kansas following his freshman year.

Under Kelvin Sampson, Quentin Grimes prided himself on his defense and it showed making major growth on that side of the ball at Houston. He is a smart and hard-working defender who is really engaged on the defensive end. That as many will say when discussing this draft pick sounds perfect for a Tom Thibodeau-coached team, and I do not think they are wrong.

Grimes may have gone a little early here since he lacks the self-creation ability you would like to see from a wing scorer. There is not much of an in-between game that the Houston alum has shown to lead you to believe he will be able to create for himself or score in the lane. This is partially due to the lack of athleticism and burst. He does make up for that, however, with guard skills that have carried over from his days as a lead guard, which benefit his game in its current state.

This leaves his projection as a fairly pure 3-and-D prospect, which is okay. If the three-point shot translates to the deeper range—which is a slight concern—Grimes will be a solid offensive player. His ball-handling and passing are solid enough to give hope in a future as a secondary playmaker which would be a nice addition to his game. As a former five-star recruit, Grimes has consistently impressed those around him with his willingness to adjust and work to change his game and grow after originally struggling. That is certainly encouraging to hear about any young player and definitively increases his chances of success.

A Draft SZN favorite: the “Lithuanian Lefty” was frequently mocked to the Knicks. The very reason the Knicks were often attached to him as a prospect is the same thing that will be the biggest disappointment to many fans: he is a draft-and-stash prospect. The former member of Žalgiris Kaunas recently signed with FC Barcelona and will not be coming over this year.

The southpaw floor general has a lot to offer in the future as the Knicks always benefit from playmaking and creation ability, two things the “crafty” combo guard brings in bunches. His time in Barcelona should be music to Knick fans’ ears after the success that last year’s first-round draft pick Leandro Bolmaro showed in the same organization. The physical and strength development will be important to his future specifically on the defensive side of the ball, but the second-best league in the world will be a great test to see how he fares on both sides.

Knicks fans should be very happy, this is another player that was great value for where he was drafted 34th overall, given some time to develop and improve in an elite program in Spain, Joku can be a real addition to the Knicks in the future and gives us something to look forward to as fans.

IT TOOK A WHILE BUT WELCOME TO NYC DEUCE MCBRIDE pic.twitter.com/EYy72hVtbp

What do I have to say about Miles “Deuce” McBride that hasn’t already been said or I did not quite literally already say about him? The 6’2″ guard has a 6’9″ wingspan, elite strength for a guard as well as high-level lateral quickness, but Deuce has more than just the physical tools. This is one of the, if not the very best point-of-attack defenders in the draft class and at the very top of the perimeter defender rankings of every person on the planet talking about this class. Not only is he a gritty pestering defender that is going to be a wet dream of Tom Thibodeau, but he also just has unbelievable instincts and can make out of this world defensive reads to make a play on a ball. While this can get him into trouble with risk-taking every once in a while, it is absolutely worth it in every single way when looking at the West Virginia guard’s defensive prowess.

While the praise and admiration for the 20-year-old are going to skew towards his defensive intensity, the Mountaineer averaged nearly 16 points a game as a sophomore in Morgantown. Averaging 41% from beyond the arc on 3.8 attempts a game, McBride is a good shooter that projects to be able to be a plus catch-and-shoot option at the next level.

However, not only can McBride score off the ball, he was eighth in the country in pull-up jumpers this year and showed a high level of self-creation to get his own shot off. He has a creative dribble game and a killer step-back, he loves the midrange but showed the ability to step back from distance as well. The lightning-quick guard uses that explosive first step to create separation and set up his pull-up jumper. His offensive game is something that will still need some tinkering and adjustment at the next level, but his quickness and shooting ability make him a nice addition to be able to benefit the offense immediately.

McBride was one of my favorite prospects in the country and every fan I spoke to would have been happy with him at 19; to get him at 36 was an absolute steal. His hard-nosed defense and tenacity will quickly make him a fan favorite at NYC, that much is obvious. Even more than that, I would not be surprised to see the Ohio native quickly find his way into the rotation and become a favorite of Thibodeau.

While certain subsections of Knicks fans wanted to take Mitchell Robinson insurance in the first round with players such as Kai Jones or Isaiah Jackson, I am much happier with this decision.

Talk about chin on the rim … Jericho Sims, man. What in the world. pic.twitter.com/BMX9QFDIVL

I am not confident that Jericho Sims will be an effective NBA player, nor do I think he is the most skilled big out there. He is, however, another in a long line of athletic Texas big and can just about jump out of the building. This makes the upside absolutely worth it for a bouncy big. Pick 58 does not typically produce rotation-level NBA players, so the Knicks get to take a flier on a freak of nature athletically.

The four-year Longhorn big is only 6’10”, but boasts a 7’3″ wingspan, which helps him with plus rim protection. Knicks fans should not be expecting Hakeem Olajuwon in the post, but it is absolutely realistic to get a contributing rim-running/rim-protecting big and at the end of the NBA draft, that would be a huge win.

If you look at what Nerlens Noel was able to contribute this year, with Mitchell Robinson back in the lineup, the 22-year-old Sims should be able to help immediately. While Sims may never be a starter-level 5 and doesn’t have the highest ceiling, he could potentially be a backup center as soon as he steps on the court and that’s a useful position that teams will always need.

At the very least, whether Sims is able to contribute or not, we have otherworldly athleticism to look for that will most certainly make for some enjoyable moments at Summer League.

While every Knick fan may have had their own personal wish list for the draft, I cannot imagine anyone has a valid reason to complain about this draft. The Knicks were able to continue to add to their war chest of future assets and also go out and get guys that fill immediate needs as well as have the potential to be long-term role players.

This was another example of mastery of his craft from Leon Rose. No matter what we think we know or read, we will never truly know what is going on in the war room. If the Knicks really had their heart set on Duarte or moving up, this was one heckuva audible to be able to make the moves they did and still end up with four picks. The most impressive thing, however, is not just accumulating draft capital as we see with some teams, but it is to draft well with the picks you have, and I believe they got great value on three out of these four players, with the fourth being Quentin Grimes, who from all accounts had a fantastic pre-draft process.

This front office has certainly done enough for us to have the trust to see these picks out. I fully expect Knicks fans to fall in love with these players by the time Summer League is over, and I for one cannot wait to see it.

»READ: Could Tre Mann be a missing piece to the Knicks’ future backcourt?