The NBA’s Rōnin, Kevin Durant, Is Shaking Off Complacency 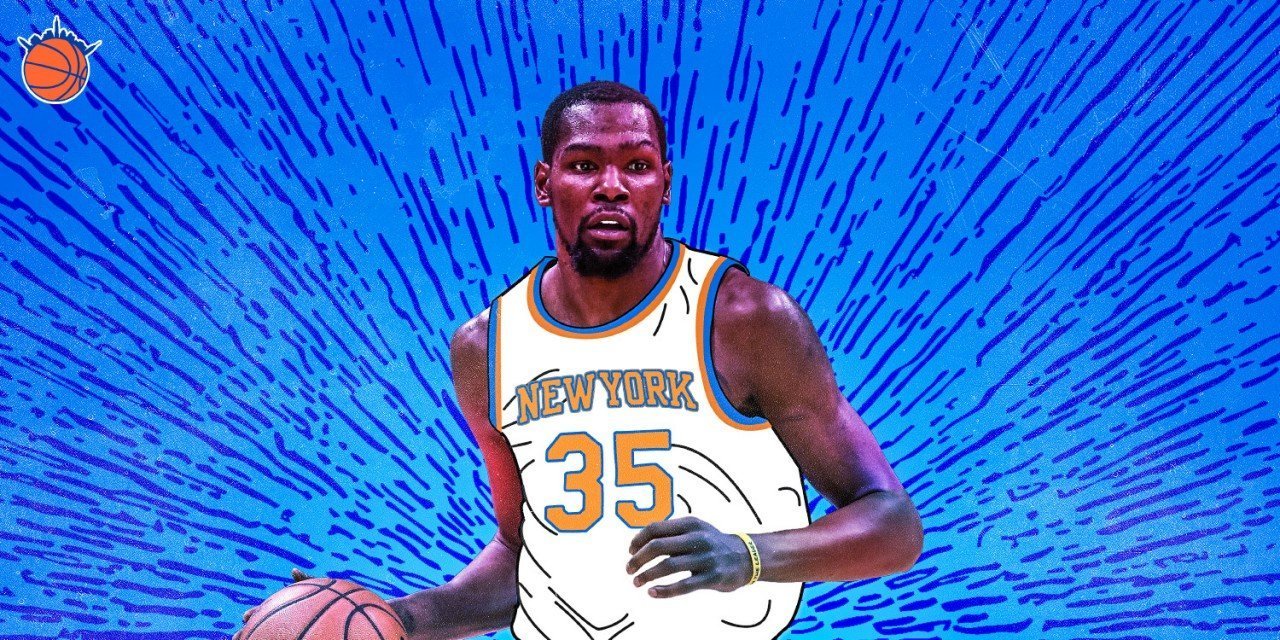 The seemingly aloof and out of touch Kevin Durant is searching for a new challenge. Are the New York Knicks the right kind of challenge for the former MVP?

At times, it feels like Kevin Durant is a 6-foot-11 Rorschach Test.

For some he is a traitor, a frontrunner, a generational talent with too weak a mind to match. This camp, which I disagree with, paints Durant’s gaunt visage in messy, indecisive brushstrokes.

For others, Durant is merely the direct descendant of, and inevitable paragon for, today’s heightened level of player empowerment—a state of the league LeBron James willed into existence when he snapped his fingers and moved to Miami circa 2010, forever changing the fabric of the NBA.

KD just doesn’t think like Mike or Larry or Magic; there’s nothing right or wrong with that; these are just different times, the thinking goes.

In my mind, Durant is neither; he is a 21st-century basketball rōnin, a roaming samurai of feudal Japan who now finds himself in changing times, in search of a new way to quantify meaning and purpose after the death of old values.

More than any other potential suitor, I think the Knicks can provide the most full-fledged opportunity for the kind of self-exploration Durant seeks.

In many ways, Durant’s departure from Oklahoma City three years ago was the death of his basketball career and the rebirth of something new. The scorn and hatred thrust upon him seemed to forge him into a new kind of warrior (pun intended): one who had lost all faith in the satisfaction of the superficial riches professional sports has to offer.

What, then, was left over? What does Durant the rōnin care about, and how can the Knicks fulfill that? From a recent interview with NBC Sports’ Kerith Burke:

Durant: It’s more so, what else do I want to experience? How do I see myself playing on a possession-by-possession basis, do you know what I’m saying? That’s what I’m looking forward to. How can I be the best version of myself every time I get on the court?

My read on Durant is that he doesn’t just want a challenge. The Warriors are, contrary to popular belief, hard to play with. Winning is easy. It’s the day-to-day stuff—how you become the perfect machine we all know, and love to hate, that makes winning look so easy—that is more difficult than it seems on the surface.

Why? Because playing on the Warriors demands championship-level restraint in a way you won’t find on any other team.

“Oh, you’re a superstar that can do literally everything on a basketball court?”

“We need you to use most of that, but we also need you to not use some of that. It’s equally important to our success.”

What separates the Knicks in that regard from the Warriors or the Clippers or any other team that will toss their hat into the Durant sweepstakes this summer is this: New York is designed, from both a play style and personality standpoint, to allow Durant to explore elements of his craft in ways that don’t exist anywhere else.

It is impossible now to have a conversation about “Do the Warriors belong to Steph Curry or Durant?” That debate has dried out, fraught with hackneyed philosophical stances about height, demeanor, two-way effectiveness, and other beaten-to-death takes. It’s unproductive, uninteresting, and annoying. If anything, Curry starring in the lead role first, before Durant’s signing, gives him the edge. That’s it.

But there is some fire to this smoke. If Durant, as he has hinted, truly wants to experience something new on the basketball court (forget his off-court ventures), he will have to leave the Warriors. His role is completely defined there.

Two Finals MVPs after forming Exodius and completing the “mega-death lineup,” there is officially no stone unturned for him. This isn’t a matter of Durant beefing with his teammates, or a lack of locker-room chemistry…

…Because on the court, Durant genuinely seems to enjoy playing with this team. But I think he is consumed with the journey of the lost samurai, the vagrant NBA megastar.

He seeks a new fight—one that will push him to hone the edge of his blade until the sweeping strike of age (he’s 30 now) forces his legacy to rest. He wants something unadulterated, pure: a basketball puzzle that will unfetter a new level of play he has yet to reach.

And there is no more challenging puzzle than taking this hodgepodge New York team to the promised land. The Clippers can offer something similar, the taste of becoming legendary in Los Angeles. They have a young, fearless core, desperate to prove themselves on a bigger stage. But guys like Lou Williams, Montrezl Harrell, and Danilo Gallinari are already close to fully formed products. They will require a certain style of play to maximize effectiveness, and Durant will again have to figure out how to fit in with them.

The Knicks are naturally equipped to fit around Durant. They are unbelievably young, moreso than the Clippers; remove 30-year-old statesmen DeAndre Jordan and Lance Thomas from the equation, and they have an average age of 22.7!

And none of their core pieces—Mitchell Robinson, Kevin Knox, Dennis Smith Jr.—are even close to understanding their true on-court identities. Robinson is a tantalizing interior force, capable of mass destruction on defense, and a budding lob threat. Knox has a silky smooth floater and a calm demeanor. Smith Jr. is an absolute dog on both ends in the best way possible with jump-out-the-gym athleticism. They will look up to Durant for guidance in a way the Clippers (and especially the Warriors) simply aren’t built for.

On the Knicks, Durant will be the man in both the locker room and on the floor.

Should he choose New York, he will have to do it all—score in crunch-time, facilitate, run the break, rebound, defend the rim, swarm the perimeter, and everything else—something he hasn’t been tasked with since the Thunder lost Russell Westbrook for an extended period of time to a meniscus tear back in 2013. Those responsibilities don’t really dim with Kyrie Irving around, by the way.

This, I think, is why Durant will ultimately choose the Knicks as his destination. He craves the rōnin‘s quest: an endless search for more and more stimulating duels, for no reason but to avoid complacency and improve the self.

I harken back to Durant’s derided “My Next Chapter” free agency announcement, when he declared his intentions to sign with the Warriors on the Players Tribune. In classically vague Durant-isms, he echoed the same sentiment repeatedly:

“The primary mandate I had for myself in making this decision was to have it based on the potential for my growth as a player—as that has always steered me in the right direction. But I am also at a point in my life where it is of equal importance to find an opportunity that encourages my evolution as a man: moving out of my comfort zone to a new city and community which offers the greatest potential for my contribution and personal growth.”

All the things that we, the fans, think should matter to NBA players—rings, accolades, money, big markets, side hustles—seem to have faded away for Durant when he left Oklahoma City. Since then, he has made sure to remind us constantly that the only thing he cares about is personal growth, and that basketball is but one part of that. A major part, but not all-consuming.

To the frustration of everyone around him looking for concrete answers, Durant (and Kyrie, for that matter) is a chronic searcher, and a stubborn one at that. He has no answers. He revels in the not knowing. He celebrates it.

He is driven by a paradoxical compass, a zen-like dogma of relinquishing control to capture it—pledging to cut through every persona projected onto him, projected from him, in order to find his truth. Kyrie operates in a similar but even surlier manner. I think it’s part of what makes them friends.

I also think it’s what will lead them to Madison Square Garden.

The dominant narrative surrounding Durant and Kyrie is that the appeal of New York—with all the business and branding opportunities such a market allows—will outweigh the stench of the Knicks, ultimately seducing them into a situation they can’t refuse.

I’m not so sure that’s the case. I think KD and Kyrie are true basketball romantics, NBA nomads, modern-day rōnins in an age where that’s perceived as reclusive, churlish, and moody (although I do think they’re all of those things, too). And there is only one thing on the mind of the rōnin: to move, and keep moving, until you find the next battle, and keep battling until you find the one that kills you.

New York, and only New York, can put that on the table.