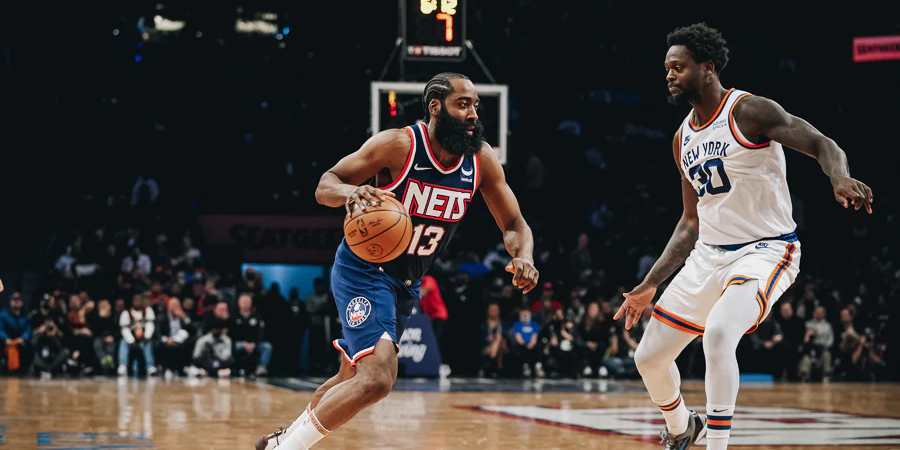 The New York Knicks (11-10) dropped a heartbreaker to the crosstown rival Brooklyn Nets (15-6) with a final score of 112-110 at the Barclays Center. It spoiled an otherwise stellar debut of Alec Burks as the Knicks’ new starting point guard and a solid performance from All-Star Julius Randle.

The Knicks were coming off a victory against the Atlanta Hawks over the holiday weekend, which allowed the youth to show out in place of the injury-depleted ‘Bockers. Meanwhile, the Nets were trying to bounce back from a loss against the fiery-hot Phoenix Suns where scoring machine Kevin Durant’s 39 points were not enough to spoil the Suns’ now-16-game win streak.

This was also the first Knicks game with Alec Burks in the starting lineup in place of Kemba Walker since head coach Tom Thibodeau announced Walker was out of the rotation on Monday. Burks provides an instant defensive upgrade, something Thibodeau values as a head coach coming off a stellar year defensively last season but dealing with a major drop-off in effectiveness this season.

KING OF THE FOURTH ALEC BURKS FOR THE LEAD pic.twitter.com/34HDiHWqEp

The first quarter of action was a bit back and forth in scoring, with signs of life from a slumping James Harden for Brooklyn. All of the Knicks starters seemed to be getting touches and moving the ball well, and their defense was solid against the Nets’ starters. Derrick Rose, who has been out for the last several games due to an ankle injury, checked in early for RJ Barrett to help Burks in the backcourt. However, the scoring for Brooklyn started to get out of hand towards the end of the quarter as Nets guard Cam Thomas got hot from behind the arc, going 2-of-3 and scoring eight.

In the second quarter, New York went through a few rotation changes to try and mitigate both the paint scoring threat from Brooklyn and the perimeter threat from the likes of Harden and Durant. While Nerlens Noel did not look effective in intimidating Nets drives to the basket, the reinsertion of Mitchell Robinson early in the quarter seemed to do the trick. That coupled with some strong defense from Julius Randle on the Nets’ big two helped the Knicks to stay in the contest. Randle looked to be an engine in the quarter and finished the half with 10 points and six assists. Burks also looked good in his newfound role as the Knicks starting point guard, scoring 13 and grabbing five rebounds.

The third quarter started auspiciously with a 12-0 run from Brooklyn. New York committed too many turnovers and had weak defense on Harden and Durant before Thibodeau called the first timeout out of the break. The Knicks started to climb back into the game by getting back to what they started off the game with: better ball movement, better shot selection, and staunch defense. They ended on a run of 16-4 to get within four of the Nets entering the fourth.

Alec Burks and Immanuel Quickley hit two big three-pointers to get the lead back for New York in the final quarter. The small-ball lineup of Randle, Toppin, Quickley, Rose, and Burks started to get it going offensively and held the lead well into the quarter against the Brooklyn starters. Rose was especially effective down the wire and showed no signs of rust this game. With three minutes to go in the third, Randle drove to the basket to get New York up by one for yet another lead change. But with a late technical foul assessed to Randle after a clutch shot by Kevin Durant, the Nets held a small lead with less than a minute to go.

The Knicks climbed back once again, as Evan Fournier hit a huge three to tie things up 110-110 with 17 seconds to go. However, a foul on Brooklyn committed by Robinson sealed a Nets victory as they hit their two free throws to close it out.

FOURNIER FOR THE TIE pic.twitter.com/DSQIzADwwJ

Julius Randle finished up the game with 24 points, nine rebounds, and eight assists. Burks led all Knicks scorers with 25 points and five assists in his starting debut. Robinson grabbed seven rebounds and scored eight in a nice bounce-back game with increased minutes. Evan Fournier had 13 points on 5-of-12 shooting and tried to get New York back into the game late with some heroics. RJ Barrett only played nine minutes due to illness, but scored four points and grabbed four rebounds.

The bench was effective as usual with Rose leading the way. He had 16 points and nine assists, and his backcourt counterpart Immanuel Quickley was just as solid. Quickley finished with 12 points and seven rebounds on 2-of-5 shooting from deep. Obi Toppin had eight points and two rebounds in very limited minutes tonight. Nerlens Noel played 19 minutes in relief of Robinson tonight, grabbing three rebounds and being largely absent on either side of the floor for New York.

The Knicks will now face the Chicago Bulls on Thursday night in Madison Square Garden. The Bulls will be a tough task for the Knicks as they sit on a 14-8 record and are 7-4 on the road.