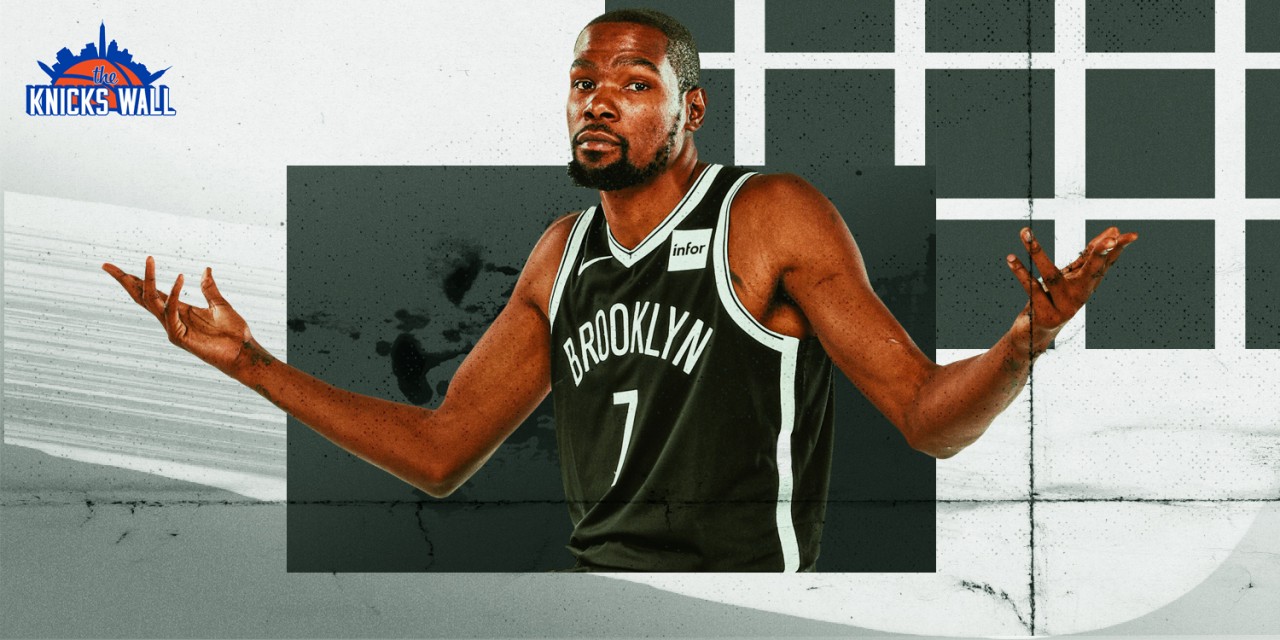 The retooled Nets are finally back in action with Kevin Durant and Kyrie Irving healthy. The Knicks have adjusted, but they may not have a chance.

It’s always a ton of fun when the New York Knicks play their crosstown rivals the Brooklyn Nets, but things will look a lot different from years past this season.

First, the Knicks and Nets will only face each other three times this season, not the normal four, as each NBA team will play one less game against each divisional opponent to accommodate the shortened schedule.

In addition to the scheduling difference, there has been significant changes to both the roster and coaching staffs for both teams. Here are the major storylines in this Knicks-Nets season series.

KD and Kyrie Finally On The Court Together

This will be the first time the Nets will have both Kevin Durant and Kyrie Irving since both signed with the franchise in July 2019. Durant missed all of the 2019–20 season with a torn Achilles and Kyrie Irving only played 20 games due to a shoulder injury.

In 2018–19, Durant’s last NBA season, he averaged 26.0 points, 6.4 rebounds and 5.9 assists, while shooting 52.1% from the field and 35.3% from three. Prior to his injury, he was in a serious conversation for overtaking LeBron James as the best player in the NBA. Now, the major question is whether or not Durant will be the same as he was pre-injury. A torn Achilles is the hardest injury to come back from in basketball, and we’ve only seen a few players in the history of the league come back the exact same.

Irving and Durant are primed to be a great pair, and the main question for the Knicks is how to defend them. Frank Ntilkina has had some flashes of success guarding Irving in prior years; guarding Durant is a completely different task. The Knicks don’t have any long, athletic wings to stick with the 6’10″ Durant, so it’ll likely be a combination of players attempting to do the impossible.

The Other Knicks-Nets Roster Changes

Durant and Irving returning from injury is what will get all the attention, but both Brooklyn and New York have made several other roster changes. Starting with Brooklyn, general manager Sean Marks acquired guards Landry Shamet and Bruce Brown via trade. To get Shamet, the Nets traded the 19th pick in the NBA draft, and to get Brown, the Nets traded 2018 first-round pick Dzanan Musa.

The Knicks made signings such as Nerlens Noel, Alec Burks, and Austin Rivers, while adding Obi Toppin through the draft. Noel will replace Taj Gibson as the second center on the roster aside from Mitchell Robinson. With the Thunder last year, the former Kentucky center averaged 7.4 points, 4.9 rebounds, and 1.5 blocks a game. Noel got the start over Robinson in the first two preseason games, but it’s unclear that will remain for the season opener against the Pacers.

Burks averaged 15 points per game last season shooting 38.5% from downtown. He’s likely to start at shooting guard to begin in the season, which is what the case was in the first two preseason games as well. Rivers averaged 8.8 points in 2019–20, while shooting 35.6% from three. Both of these guards will replace Damyean Dotson and Wayne Ellington as backcourt shooters.

However, Obi Toppin should be the most impactful roster addition for the Knicks. The 2019–20 Wooden Award winner averaged 20 points and 7.5 rebounds per game on 63.3% shooting from the field and 39.0% from three last season at Dayton. Toppin will likely play significant minutes for the Knicks the entire season.

The Knicks hired Tom Thibodeau as head coach after moving on from David Fizdale in the middle of last season, and the Nets hired Steve Nash after moving on from Kenny Atkinson in the middle of last season. This changes both teams in terms of their identities. The Knicks will have more of a defensive identity, while the Nets will be focused on a fast-paced offense.

In order to implement this fast-paced offense, the Nets hired a few former Knicks as assistant coaches. The first is Mike D’Antoni, who coached the Knicks from 2008 to 2012. D’Antoni is coming off a four-year stint as head coach of the Houston Rockets, with one Western Conference Finals appearance and three second-round exits. From 2003–08, D’Antoni coached the Steve Nash–led Phoenix Suns where he implemented this fast-paced “seven seconds or less” offense.

Amar’e Stoudemire was also hired as a Nets assistant coach. Stoudemire averaged 17.3 points and 6.7 rebounds per game in his Knicks career from 2010–15. He played in Israel with Maccabi Tel Aviv in 2020 before deciding to pursue a career in coaching. Furthermore, in a more minor hire, the Nets hired Royal Ivey as an assistant coach, who was on the Knicks staff from 2018–20. Ivey is a close friend of Kevin Durant.

While the Nets hired a bunch of former Knicks, New York made some hires of their own. The Knicks hired former head coach Mike Woodson as an assistant coach. Woodson coached the Knicks from 2012–14, and was known for his defensive-mind. Another major hire on the Knicks was former Kentucky assistant coach Kenny Payne. As a result, the Knicks now come into the season with six Kentucky players on the roster, including first-round pick Immanuel Quickley.

Another storyline in this game will be the matchup between young centers Mitchell Robinson and Jarrett Allen. Allen is entering his fourth year, while Robinson is in entering his third, and there’s no doubt that Allen is also at least a year ahead in terms of development. The 6’11″ Nets center has been a starter for two seasons now, coming off a year where he averaged 11.1 points, 9.6 rebounds, and 1.3 blocks per game.

Allen is certainly more polished offensively and more disciplined defensively, which is the major reason why he’s ahead of Robinson developmentally thus far. Robinson averaged 9.7 points and 7.0 rebounds to go along with 2.0 blocks per game in 2019–20. He also shot an NBA-record 74.2% from the field.

It’s always appeared that Robinson has a higher ceiling than Allen; the main question is if he can capitalize on that potential. Robinson averaged 3.2 fouls per game last year, which is why Nerlens Noel has started over him early in the preseason, and why Taj Gibson started over him last year. In order for Robinson to improve, his going to need to play smarter on defense. If he can do that, there’s no doubt that he can be as good, if not better, than Allen this year.

The clear difference between both of these teams last season came in the three-point shooting department. The Knicks ranked 29th in the NBA in threes attempted per attempt at 28.4, while the Nets ranked fifth at 38.6. However, Brooklyn only ranked 26th in three-point percentage, shooting 34.2% beyond the arc as a team, while the Knicks ranked 27th at 33.7%

With Kyrie Irving and Kevin Durant back in the fold, the Nets will almost certainly shoot a better percentage from three. This will cause major problems for the Knicks, who ranked 28th in the NBA in opposing three percentage at 38.1%.