Talk of the Town: Are the Nets a Threat to the Knicks’ Free Agents Aspirations? 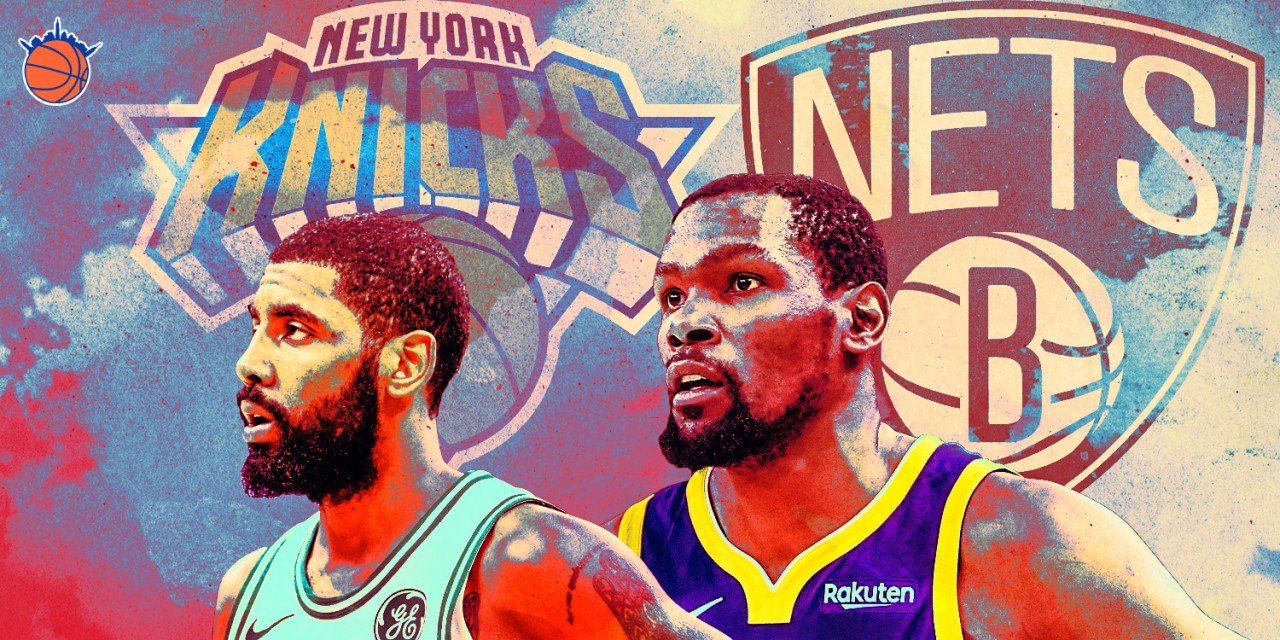 A feisty Nets team has clawed back into relevancy vis a vis playoff contention in the East. Don’t look now, but Brooklyn may be the New York prized free agents Kevin Durant and Kyrie Irving could jump ship to instead of the Knicks.

Ever since their inception in 1967, the Nets organization has always played second fiddle in the New York basketball market to the Knicks in terms of relevance, popularity, and glamour. Even with their laughable dysfunction and atrocious on-court product over the last couple decades, the Knicks receive exponentially more coverage and attention, and largely remain a more desirable franchise than their little brother down in Brooklyn.

This summer, the Brooklyn Nets have the opportunity to make a huge statement by swooping in and crushing the Knicks’ free agency dreams.

With the upcoming free agency class being one of the most loaded in recent memory, transcendent superstars like Kyrie Irving and Kevin Durant are out there for the taking. Both have been linked to the Knicks on many occasions, but the Nets have quietly positioned themselves nicely to land these players as well.

So how big of a threat are the Brooklyn Nets to sign the Knicks’ prime free agent targets?

Shortly after relocating from New Jersey to Brooklyn, the Nets made one of the most historically lopsided and awful trades in NBA history in 2014, trading away a boatload of first-round picks to the Celtics for old and declining veterans Kevin Garnett, Paul Pierce, and Jason Terry. Brooklyn was able to squeeze one playoff series win out of those guys before going into the tank the following few seasons, finding themselves with neither talent nor draft picks.

After getting some competent people in the building and making some intelligent acquisitions and draft picks, the Nets are likely to make the playoffs with a plethora of young talent and ample cap space—all things that are attractive to free agent stars looking to win.

Many factors attract free agents to certain franchises, and it seems like both the Knicks and Nets are going to be players in this year’s free agent frenzy. Here are some notable factors for determining who has the upper hand in a potential war for Kevin Durant and Kyrie Irving.

Money: Kevin Durant has already come out and stated that money is a huge factor in his free agency decision, and I get the sense that Kyrie cares a great deal about money as well.

The Knicks already have cap space for two max contracts, and the Nets would be able to have two max slots if they are able to jettison Allen Crabbe and move D’Angelo Russell, per Brian Windhorst. Therefore, in terms of just contract money, both the Knicks and the Nets would offer the same amounts to both KD and Kyrie.

The difference that gives the Knicks the slight upper hand here is the off the court earning potential for these guys. I envision KD and Kyrie would be able to market themselves better as Knicks and would have more opportunities to monetize off of things like endorsements, commercials, etc. in Manhattan as opposed to Brooklyn. The Knicks’ brand is just simply more recognizable and worth more than the Nets’ brand, and their stardom would be amplified to a greater extent in the blue and orange uniform.

Ownership: James Dolan is an unquestionable turnoff for any player considering joining the Knicks. Dolan’s intrusive, volatile, and outspoken personality has been rubbing people the wrong way for years, and it doesn’t seem like he is making any improvements any time soon. Dolan’s incident with widely respected Knick legend Charles Oakley has made players question the organization’s treatment of former players and could be a deterrent for anyone trying to build their legacy as a Knick, like KD or Kyrie.

In Tuesday’s interview with Michael Kay on the YES Network, Dolan insisted he wasn’t going to sell the team and made a complete fool of himself when referencing the spat he had with a fan about a week ago. Dolan continues to dominate headlines for the wrong reasons and it has not reflected positively on the organization at all.

James Dolan is confident the Knicks will have "a very successful offseason when it comes to free agents." pic.twitter.com/4DEkv2yDOZ

Although Dolan is confident that the Knicks, “will have a very successful offseason when it comes to free agents,” there his no doubt that his childish behavior and ineptitude could play  a role in whether the Knicks offseason is one for the ages or one to forget.

On the Nets’ side, their ownership group is much more under control and makes much fewer negative headlines than Mr. Dolan. Mikhail Prokhorov has not always done the best job with the Nets but has displayed a desire to make the team better and doesn’t seem to be all about himself. His partner Joseph Tsai is set to be one of the richest owners in America and the first Chinese owner in the NBA, which can create tremendous growth opportunities for the Brooklyn Nets.

Media: Cutthroat, intense, widespread. All words to describe the New York media. This is one factor that doesn’t bode to well for either team. The Knicks already receive a ton of media attention as it is with 13 wins and no stars, imagine that scene with KD and/or Kyrie here? As for the Nets, they aren’t as covered as the Knicks but, the addition of a superstar or two would propel the Nets’ media coverage to nearly Knicks-level.

Durant and Irving have made headlines with their own issues handling the media. Both have gotten very defensive and bothered by some questions they’ve received and coverage they get and haven’t been afraid to clap back. KD and Kyrie have been criticized for their sensitivity and immaturity when talking to the media and it raises somewhat of a red flag. If they are having difficulty handling the much less low-key Bay Area and Boston media respectively, how are they going to potentially fare in New York?

Not sure if this is a make or break factor yet, but it something to keep in mind due to the history of awkward and contentious media encounters both KD and Kyrie have had.

Roster: As currently constructed, the Nets have a much more talented roster than the Knicks, and that is not debatable. The Nets have a nice combination of young, vibrant players and tough veterans at almost every position on the floor. Jarrett Allen seems to have been a very good pick, blocking shots and rebounding the rock, coupled with Ed Davis who is a tough veteran big whom guys love playing with. On the perimeter, Joe Harris, Caris LeVert, Spencer Dinwiddie, and of course D’Angelo Russell can all knock down threes and have been instrumental in the Nets success this season. Compare that to the Knicks’ roster, and I believe the Nets have a distinct advantage.

Having some key pieces in place is an important factor for guys looking to join a new team and win immediately, just ask LeBron James. I believe KD and/or Kyrie would view this roster as much more ready to compete right away as they have shown they can be a good team already without a superstar. Unfortunately the Knicks haven’t shown that they can compete at all and might be viewed as too much of a reclamation project for KD and Kyrie to want to come there.

Location: This is one factor that the Knicks have going for them in a big way. There is absolutely no comparison between the legendary aura of the Madison Square Garden and the Barclays Center. A tremendous amount of players are on record saying that MSG is their favorite place to play simply because of the rich tradition of the building and the fact that it is the Mecca of Basketball.

MSG is the biggest stage with celebrities, die hard fans, and excellent vibes; with the addition of power-shifting talent, it can return to being one of the most desirable sports venues in America. The same cannot be said about Barclays, which is a nice arena, but lacks the history and mystique of MSG.

Despite the fact that the Nets have been and seemingly always will be secondary team in the New York basketball landscape, it is evident that they have done a good job of turning their franchise around recently and making themselves a viable destination for free agents. Even though I believe if Kyrie and/or KD choose New York, they will choose the Knicks, the Nets shouldn’t be completely ruled out in the free agency sweepstakes of 2019.