The Knicks square off against crosstown rival Nets in the first game of the post-Melo era.

Knicks basketball is unofficially officially back after an eventful offseason which saw the organization part ways with their President of Basketball Ops (good riddance), and trade away one of the greatest players in team history. Along with these two major moves, the Knicks added some new faces into the mix, most notably French point guard Frank Ntilikina, who can hopefully give it a go tonight while nursing a sore groin.

Tonight’s matchup against the Brooklyn Nets doesn’t seem very appealing on the surface, as they project to be towards the bottom of a weak Eastern Conference. However, this game features numerous intriguing young players who are looking to take a quantum leap forward this season in terms of talent development.

All eyes are on forward Kristaps Porzingis to have a breakout season and turn into a star. KP is already the de facto leader with the departure of ‘Melo, but it is his time to really grab the bull by the horns and show Knicks fans, the organization, and the basketball world that he is the real deal. That begins tonight. Although it is only preseason, I expect to see KP to come out strong in this game against a team he should be able to have success against.

KP is more than capable of becoming a franchise player, and not having an iso scorer to share the ball with will help his offensive game tremendously. Added muscle in the offseason will help his stamina on the defensive end of the floor. During his time in New York, Porzingis has shown a desire to improve and a willingness to learn, and I believe he is ready to take the next step. Talent means nothing unless you put it to good use through execution, and the time is now Kristaps to take everyone by storm.

Besides Kristaps, the Knicks head into their first preseason game with many new faces on the team. Some of the notable names include Michael Beasley and Tim Hardaway, Jr., who have the most to prove out of anyone on this roster. Beasley’s status as a second overall pick has led his career to be viewed as a disappointment, despite the lofty opinion he has of himself. For THJ, he is out to show that he’s fit to earn the four-year/$71 million contract in the offseason New York threw his way.

Look for both of these guys to come out aggressive tonight against the revamped Nets backcourt, which features some pretty good defenders in D’Angelo Russell, and DeMarre Carroll in the frontcourt.

Beasley has the ability to have an excellent season in New York. He has all the physical tools and confidence to do it; it’s just a matter of keeping composed and his head on straight, which he hasn’t seemed to have mastered quite yet (see: watch on ankle). He has put quite a bit of pressure on himself by comparing his abilities to KD and LeBron, but I expect him to come out firing tonight. 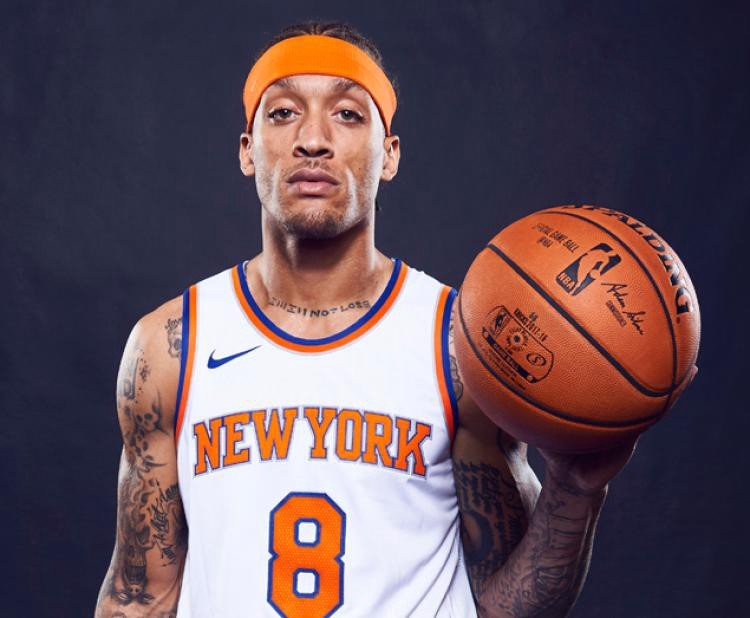 As for THJ, he returns to the Knicks with more pressure than the first go around, simply because he was undoubtedly overpaid in the offseason. There’s been a lot of buzz around Hardaway Jr.’s improvement, and he seems locked and loaded to be a consistent scorer, but I’ll believe it when I see it. THJ, go out there tonight and get some quality shots up, and show us why you are worthy of the big bucks given to you.

My final player to watch for the Knicks tonight (if he ends up playing) is point guard Frank Ntilikina. He is the guy Knicks fans want to see the most, and it’s unfortunate and a little concerning the injury bug seems to have plagued him over the summer since he was drafted. Tonight’s projected point guard matchup between Ntilikina and Russell, who both stand at 6’5″, is the most intriguing individual showdown. The former lottery pick looks to show everyone that the Lakers made a mistake by dumping him to Brooklyn, while Frankie looks to begin to prove that he is going to be a force to be reckoned with at the one.

Over in Brooklyn, the Nets made some impressive offseason moves, acquiring the aforementioned D’Angelo Russell and DeMarre Carroll while also dealing for Allen Crabbe. At this point, we all know the Nets aren’t looking to contend and are focused on getting young pieces in place under coach Kenny Atkinson in order to set themselves up for the future.

Despite the lack of talent this Nets team possesses, they are definitely improved from last year and have the potential to be a surprise 30–35 win team if guys like Russell and Crabbe are able to live up to their scoring potential. I like what they’re doing down in Brooklyn and they seem to finally have a game plan for the future.

With young shooting guards Caris LeVert and Crabbe out tonight with injuries, look for the Nets to struggle to score the rock. A low scoring affair seems to be in the cards tonight, as this is the new Knicks’ players first chance to gel in actual game speed.

I fully expect KP to come out strong and play an all-around solid game. What we see from the Knicks tonight in terms of a win or loss quite frankly doesn’t matter. The development of the young players and the effective infusion of the new faces into the team is what I want to see.

Frank is a go! The Knicks’ rookie will suit up tonight in their first preseason game. Meanwhile, Joakim Noah, Mindaugas Kuzminskas, Ron Baker, and Luke Kornet are all out tonight (per MSG Networks’ Rebecca Haarlow).