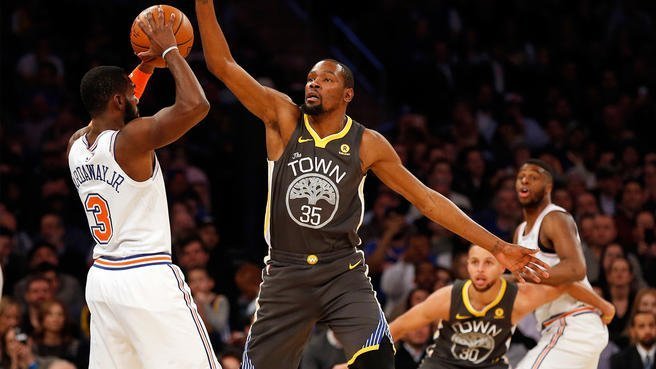 An eviscerating Kevin Durant fourth-quarter performance eradicated a promising three-periods long show from Ntilikina and the Knicks in their fifth-straight loss.

Before the matchup, however, the hullabaloo centered around head coach David Fizdale’s lineup change, pulling Trey Burke, Lance Thomas, and Enes Kanter out of the starting unit in favor of Noah Vonleh at power forward and the second-round selection Mitchell Robinson at center for his first career NBA start.

The change worked to mixed results, though. For instance, Ntilikina, moving to the point guard position, couldn’t limit the damage from two-time MVP Stephen Curry. The All-NBA point guard shaked and baked his way to a 5-of-6 first-quarter mini-eruption, 13 points. (A slight take here, and not to sound overly optimism: the energy expended to not-so-contain Curry kinda worked, as Frank and the Knicks made the all-world player make great plays, which caused the rest of the Warriors’ offense to suffer in the early going.)

The second-year guard-forward’s move to lead guard, however, forced Frank to be more aggressive on offense. Ntilikina scored 13 points on 4-of-7 from the field in the first half. He would finish the game tying his career-high 17 points.

The other side of Fizdale’s decision, though, was leaving his bench in too long during the fourth quarter. Look: nobody is stopping Durant. Nevertheless, the first-year NY coach left Burke, Trier, and Hezonja in the game too long, thus giving Durant and the Warriors the platform to launch and all-out assault, beating the Knicks into Penn Station, resulting in a 47-16 Oakland advantage to break the glimmer of hope the Knicks could pull off an upset.

Kevin Durant demonstrated his full arsenal of offensive talents, draining backbreaking triples and smoothly gliding to the rack, extending his long limbs for glass-kissing layups. You wish Ntilikina and Dotson were in the game in those moments. Strangely, Frank averages nearly 30 minutes—during his five-game small forward stint—but on Friday with as the floor general, he ended up only playing 26.

This is why frank should start at PG. He’s being FORCED into making decisions and realizing he’s more capable on offense than he thinks. #newyorkforever #knickstwitter

Kanter was effective off the bench, as the offensively minded center gobbled up 13 rebounds and scored nine points. But again we saw the impact of Enes’ poor defensive play, letting interior passes slip right by him, or double teaming at inopportune moments, unable to recover and find his assignment.

With that through, let’s look at the game.

One of Fizdale’s gambles was starting Frank Ntilikina at point—and it paid off in spades. Ntilikina looked for his own shot, knocked down his career high in three-pointers made at three. Friday night demonstrably proved Frankie is the 1 guard—well, almost. He deserves to be on the court in the biggest moments because we’re acutely aware that he impacts the game for the better. For better or worse, he significantly impacted Curry’s game and movement on the court, making the All-Star’s night difficult (Steph would still score 29 points 10/19 from the field; much of his second-half minutes came opposed Burke).

But Ntilikina with the ball in his hands is dangerous. On defense, too, switching as teams do becomes far less worthy of the term “mismatch” when your 6-foot-6 point guard can admirably defend the likes of Klay Thompson and Kevin Durant.

Truly the 20-year-old expatriate is growing up in front of our eyes—and the immense stage of Madison Square Garden, too. His shot from outside looks pure, and as opponents catch up on his ability to knock down three-balls, it’ll further open lanes to the hoop for Ntilikina to create for himself and his teammates.

A Preview of Durant in MSG?

Well, with the red carpet rolled out for impending free-agent Kevin Durant, the two-time Finals MVP did not return the hospitality. The 30-year-old Ashanti fan Durant was lethal in the fourth quarter. He tallied 41 points with a good majority of those points slicing and dicing the Knicks’ chances to pull off the unthinkable against Golden State in the fourth quarter.

Durant heated up to supernova levels. On the Mecca’s hardwood, KD danced with the ball in his hands like Baryshnikov. The fourth-quarter outburst cleared the way for garbage time with two minutes remaining. The Garden crowd cheered for Durant; it was unclear whether those were Warriors fans, Durant fans, or Durant-to-the-Knicks fans. Let’s go with Door #3.

This part’s a tad difficult to decipher. Fizdale stuck with Trey Burke and the second unit down the stretch in key fourth-quarter minutes due to a strong performance from Trey Burke starting in the third quarter and extending slightly to the beginning of the last period.

Nonetheless, the Warriors exploited Burke, Thomas, and Mario Hezonja when the trio shared the court together. Indeed, nobody in the league can hold a candle to the DMV native, but as wise as Fiz was to yank Burke out of the starting lineup and shift Frank to the point, he himself showed coach growing pains by not relinquishing the bench unit for more time featuring Ntilikina running the show and Dotson and the wing.