New York, New Me: Resolutions for the Resident Knicks

Although some Knicks can’t even legally drink adult beverages, that doesn’t mean we don’t have New Year’s resolutions for them.

New Year’s Day is a bit of a contradictory holiday. It’s a time for introspection, for ambition, for self-betterment. It’s also a day to wake up feeling like Death itself went on a week-long bender, stand in line for overpriced brunch, and do everything in your power not to puke on the street under the harsh sun of a new year.

And speaking of nausea, it’s also a day when the Knicks will play the Denver Nuggets, the team currently in first place in the Western Conference. The Knicks come in losers of 14 of their last 16 games, a streak in which little has gone right outside of Kevin Knox’s scoring. So in the spirit of the holiday, here are some resolutions for each member of the roster in the hopes that the misery of 2018 will lead to brighter days ahead.

Knox has shown that he has the chops to be a bona fide scoring threat in the league for years to come. The main thing holding him back on both ends right now is simply the lack of muscle on his 6-9 body. But that’s to be expected for a 19-year-old playing in a world of grown men.

Knox has a similar frame to a younger Freak, in that he’s all broad shoulders and long arms with no definition. If he can get on Giannis’ weight plan, who knows, maybe in five years he too can challenge The Rock to a weightlifting competition (The Rock will be 51 by then, which should help).

Mitchell Robinson: Study the practice of pacifism and its benefits

Robinson has had a better first half season than most could’ve hoped for when he taken with the 34th pick after a year off from the game. But there’s one thing keeping him off the court (other than the current ankle injury). Watching him on defense, you could be forgiven for thinking you’re watching a spin-off of the Drunken Master series with all the hacking and whacking and stumbling around the floor. Learning to mellow out and embrace his inner hippy would allow David Fizdale to play Mitch more than 18 minutes a night.

Personally, I’m of the belief that Joel Osteen may very well be the devil incarnate, but Frank clearly needs some guidance. Maybe it’s Osteen’s Break Out! 5 Keys to Go Beyond Your Barriers and Live an Extraordinary Life, or maybe it’s How Stella Got Her Groove Back, or maybe he just needs to read The Secret so he can start visualizing a Frank who plays like he understands that he belongs on an NBA court.

Oh and keep doing this:

Enes Kanter: Make like Buster Keaton and embrace the art of silence

Like pretty much every player other than Tim Hardaway Jr. on this roster at times, Kanter has fallen out of favor with the coach. Unlike everyone else though, he’s handled his demotion by sulking, complaining to the media, and posting not so cryptic tweets, alienating large portions of the fanbase in the process.

It’s natural for the 26-year-old to want to play more, but he seems to be forgetting one crucial thing: actions speak louder than words.

In a way, it’s been a tough to evaluate Timmy’s performance this season. He’s been asked to do more of what he’s always done (shoot a lot) without much pressure to do things he struggles at (play defense, not shoot contested pull-up threes with 19 seconds left on the shot clock). For now he is who he is, and in a sad way is the perfect mascot for this year’s Knicks team. But he does rock the black turtleneck, and since he’s playing in the fashion capital of America, he may as well spend the rest of the year turning himself into a fashion icon.

Allonzo Trier: Spend time each day meditating on the concept of Trust

Iso Zo is undeniably talented. And did you know he went undrafted? But sometimes it seems like he forgets that his teammates happen to be NBA players too (most of them, at least). I’ve never seen someone so adamantly refuse to dish to a teammate on the fast break or swing the ball on the perimeter. Remembering that it’s okay to pass the rock every now and then will make him less predictable and could open up more scoring opportunities for Trier in the long run.

I don’t know how or where Mudiay stumbled upon the ancient wellspring of MJ’s Secret Stuff, but he needs to guard it with all the secrecy, extravagance, and lack of regard for human life of Dumbledore guarding the Philosopher’s Stone. Long live Nicholas Flemmanuel Mudiay.

Phil Jackson may be gone, but wherever he is (probably Montana), I’m sure he’s watching Vonleh throw his monster ass into defenders and smiling proudly to himself. The NBA world has already fallen in love with Guerschon Yabusele. A search for the exact phrase “Kyle Lowry thicc” turns up over 450 options, yet the same search reveals zero items for Noah Vonleh.

It’s time for that to change. It’s time for people to get down with the thiccness revolution (which is good preparation for Zion anyway). 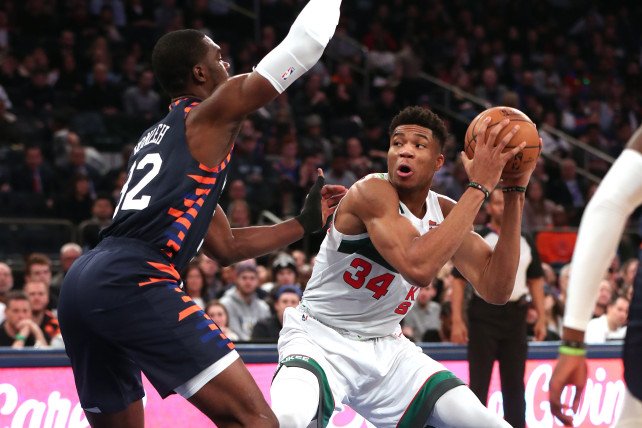 Dotson has had a turbulent season so far. He has as many games with 30+ minutes as he does DNPs (eight each), averaging nearly 14 points and seven rebounds his first eight games, then five and two the following six games, then a string of DNPs, then 14 and four in seven games, and most recently six points and three rebounds on 29 percent three-point shooting in the last nine games (three of which he missed).

I’m not worried. He, like Frank, is one of the few players on the team whose game is better suited to playing off talent in a movement-based system than in an iso-heavy, pick-up style offense. KP’s return, when it comes, should stabilize his role and allow him to be the valuable 3-and-D wing whom he really is.

Here are Luke’s averages in the nine career games in which he’s played 20+ minutes: 14.7 points, 5.2 rebounds, 1.3 blocks, and 3.9 made threes on 54.4 percent shooting from deep. It’s unclear how far out of the rotation Kanter will fall, but what is clear is that this year’s Knicks are better when the center rotation is manned by a crew of Robinson, Kornet, and Vonleh as the small-ball 5. Luke may be so slow he makes Brook Lopez look like Clyde Drexler, but he’s created a place for himself on this team.

Trey Burke: Get better acquainted with the Orlando housing market

On Saturday, playing against the Jazz team that once drafted him with the ninth pick, Burke scored 12 points on five shots in just over seven minutes of play. It was the first time he scored more than seven points in over a month. It was just 10 months ago that Trey was that talk of the team, the comeback of the year, the diminutive king of the mid-range, but now Burke once again finds himself on the outskirts of the rotation.

Whether it comes via trade or in free agency this summer, Burke’s time with the Knicks is likely coming to a close. The good thing is there are still teams out there that need scoring from the point guard position and are willing to gamble on a 26-year-old who can shoot.

Courtney Lee: Get used to riding the bike

In his 10 games since returning from the neck injury that kept him out the first two months of the season, Lee has averaged a career low (by a longshot) 14.9 minutes per game. Judging by this recent tweet by Stefan Bondy of the Daily News, it doesn’t seem like that’s going to change drastically, even when he’s back to full speed. Lee’s job now is to stay ready so when he is called upon, he can produce enough to convince a playoff team that he’s worth the eight-figure multi-year remainder of his contract. I see a lot of riding the stationary bike in warmups in his future.

Lance is by all accounts a pro’s pro, and going against him in practice should do wonders for Knox’s offensive game, as Thomas is exactly the kind of smart, physical defender who gives Knox problems. Some of Thomas’ grit and defensive edge could rub off on the neophyte, who has shown himself to be too frail and flimsy on that end for the most part. Time to become the wise old man he was born to be.

Mario Hezonja: Get your passport up to date and brush up on your Spanish

Mario was the signing most Knicks fans were the happiest with this past summer, but that joy and hope has quickly faded into disdain and ridicule. While he did provide one of the great Knicks highlights of the last five years or so, he’s otherwise shown himself to be a non-entity on the court. He might get a minimum contract somewhere, but don’t be surprised if he takes a bigger payday in Europe next summer instead.

I had forgotten exactly how much I missed seeing the Unicorn until I rewatched the highlights of his 40-point masterpiece against the hated Pacers (shouts to clutch Frankie). Everything will be different once the All Star returns. Until then, we just have to wait.