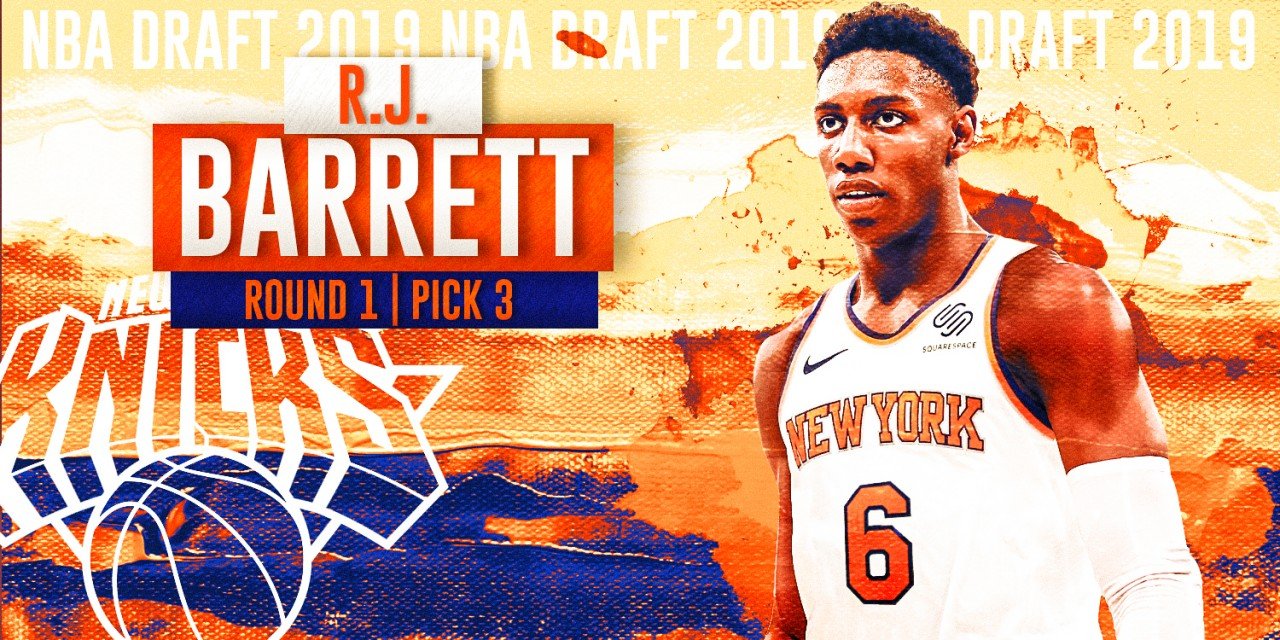 Already rumored to be interested in New York, Duke’s RJ Barrett was selected by the Knicks, who look to turn one of college basketball’s leading scorer into a star in the Big Apple.

The Canadian-born Barrett has long been linked to the Knicks following the NBA Draft Lottery results leading to New York falling from the tied-best odds to win the lottery to the third pick. With consensus first-overall pick Zion Williamson—Barrett’s teammate in Durham, North Carolina—off the board, New York looked to evaluate options at no. 3, the team’s highest selection in the draft since 1985, when the Knicks picked Georgetown’s Patrick Ewing first overall. The Knicks were also reportedly high on Cam Reddish, another Duke teammate, Texas Tech wing Jarrett Culver, and Vanderbilt guard Darius Garland.

Barrett, however, remained a standout freshman in college basketball and one of the best players in the ACC. With Williamson, Barrett led the team in scoring, dropping 22.6 points per game. Starting all 38 games, the five-star recruit also chipped in 7.6 rebounds, 4.3 assists, and 0.9 steals per contest, playing 35.3 minutes a game, too. Barrett had the third-most minutes played in college basketball last season along with the third-most made field goals and fourth-most points scored. He was a 2018–19 Consensus first-team All-American, the Jerry West Award recipient for college basketball’s top shooting guard, and earned first-team honors on the All-ACC.

The 6-foot-7 Barrett made a name for himself on the premier stage that followed Duke basketball all season as a top scorer and creator. A fine rebounder for his position, too, R.J. was often looked as the Blue Devils’ best option to score of offense, often initiating in the halfcourt and breaking down defenses. Scouts and draftniks project Barrett to make an immediate adjustment in the NBA with scoring, while his defense and ball watching on that end remains to be ironed out. At 19 years old—by way of his birthday only six days ago—Barrett is one of the highest upside players in this draft.

In his profile of the Duke prospect, Mike Cortez alludes to Barrett’s high ceiling, which could be valued by the Knicks or other teams:

“Beyond the appeal of his pedigree, R.J. Barrett represents the greatest option for a summer that can break off into three different timelines. This upcoming offseason possesses an unrivaled randomness. Barrett’s selection keeps the Knicks insulated to whatever the offseason has in store.”

Barrett has been a relatively polarizing prospect. His father, Rowan, played professionally and was a staple on the Canadian national team. Barrett’s godfather is two-time NBA MVP Steve Nash—Rowan’s teammate—and his pedigree is nearly unmatched in this draft class.

Nevertheless, R.J. has been criticized due to his shot selection in college and his star diminished in the enormous shadow of Zion Williamson at Duke. Barrett’s player comparisons, similarly, drive home the point of his divisiveness; he’s been compared to everybody from Andrew Wiggins, DeMar DeRozan, Harrison Barnes, Danny Granger, and Kobe Bryant. It’s fairly close to “you either love him or hate him” at the moment.

Now the Knicks must decide whether to keep Barrett or trade him to a destination like Washington for Bradley Beal. Will Barrett be enough as the centerpiece of a trade to net Beal in New York? Conversely, are the Knicks confident enough they’re on the right track to score big in free agency? Barrett aims to fit well next to Kevin Durant and Kyrie Irving—two max-contract superstars in a league dependent on stars to win games, but either All-Star is far from a done-deal for the ‘Bockers.

But for now, the Knicks will incorporate Barrett into their young, developing team, and hope to strike gold and bring in strong talent via free agency.

Barrett had a strong, emotional response to his selection, along with teammate Williamson’s reaction to his first-pick coronation.

“I’m glad the city wants me here as much as I want to be here,” Barrett said, per the New York Daily News.

The reason behind Barrett’s strong reaction was two-fold: his now-deceased grandfather was a long-time Knicks fan who wanted his grandson to play for the New York team, and his parents went to St. John’s together. R.J.’s mother Kesha is from Brooklyn.

Per Stefan Bondy of the Daily News:

“My grandfather was one of the reasons I was crying,” said Barrett, who cried on his father’s shoulder after the announcement. “Because we used to watch the Knicks growing up and he always used to tell me I was going to be a Knick. I’m sad he can’t be here to see it. But I’m just very happy, man.”

The City of New York is seemingly embracing Barrett immediately—Barclays Center erupted with loud applause from Knicks fans cheering on their team’s highest selection in 34 years. It was tough to miss R.J., who wore a bright pink suit with a black shirt and tie and sparkling loafers.

“This is the place I wanted to be.” –@RjBarrett6

This story is breaking and will be updated when more information is available.