The Next Step for the Knicks? Unlocking Its Young Core. 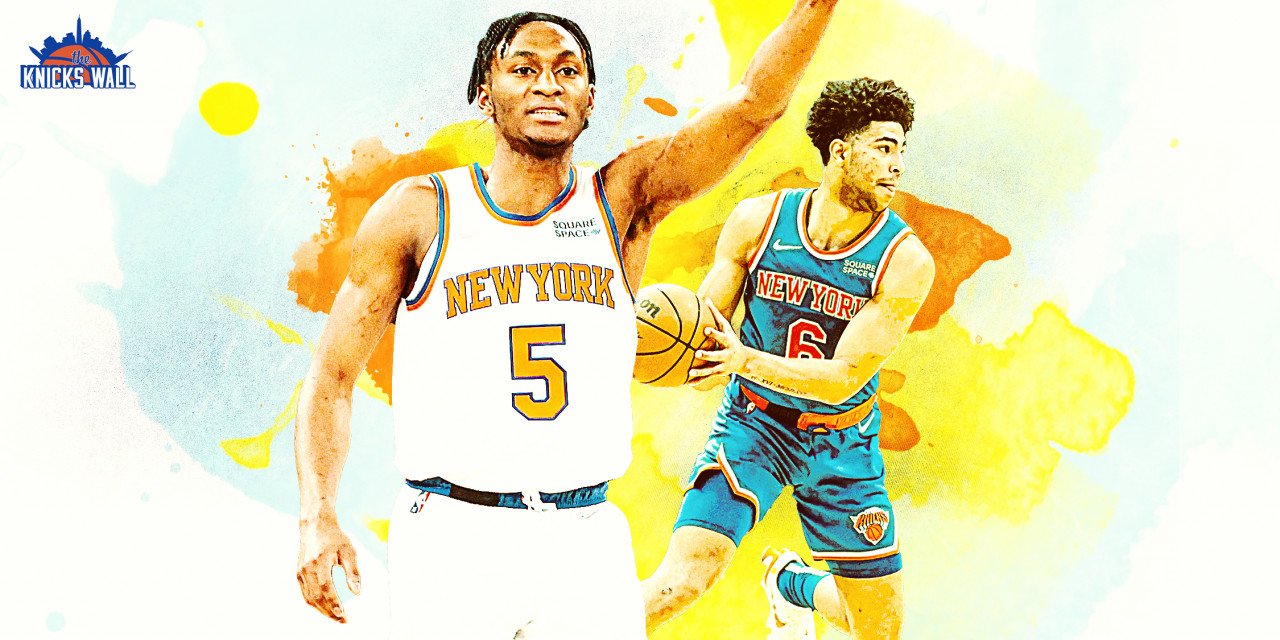 The Knicks have spent a lion’s share of 2021–22 handing big minutes to vets, but it’s the youth down the stretch flashing promise.

The New York Knicks didn’t live up to expectations in 2021–22, but it doesn’t mean good things didn’t come out of it. There is plenty to be optimistic about, as the Knicks head into another offseason in their never-ending quest to field a contender. New York has collected an exciting group of young players morphing themselves into a core that can sustain success in the coming future.

The well-documented road has not been easy for New York, but they are in a prime position to become one of the exciting young teams in the league akin to the Cleveland Cavs and the Memphis Grizzlies. Early on this season—and even most of last year—head coach Tom Thibodeau was resistant to playing his younger players in favor of his more experienced veterans. The 2020–21 campaign was a surprisingly great success for New York; they rode the backs of savvy veterans to a late-season surge that saw them go on a nine-game win streak, propelling them to the fourth seed in the Eastern Conference. By all accounts, that season was an overachievement. Players had reached levels that never had before and the Knicks knew what kind of team they were—something they’re still trying to figure out now.

Thibodeau tried to instill the same plan this season, but soon it became pretty evident those same players, now a year older, were not going to be able to replicate their top-four performance. With a combination of questionable game plans, injuries, a weirdly revamped roster, and just plain stubbornness, the Knicks soon dug a hole too deep to climb out of. There was much left to be desired from the coaching staff and clear adjustments need to be made for next season.

Even though the Knicks couldn’t live up to the hype from the last season, one thing that is undeniable from this season is that their youngsters are fun to watch. They run, they jump, they shoot, they defend, and—most of all—they always play hard. You’d be hard-pressed to think of another time when the Knicks have had a group of dynamic young players at once (and that’s because they haven’t). The Knicks have never committed to developing a young group of players. Since Patrick Ewing was traded in 2000, New York has tried to recapture its former glory by always opting for an amalgamation of quick fixes that never have worked out, ushering in an era of never-ending turnover and dysfunction from executives, coaches, and players.

There is an assumption that, with such high demands from the fanbase, New Yorkers aren’t willing to go through a rebuild, but that couldn’t be farther from the truth. Fans want something they can believe in, and the Knicks may have given people hope. There is plenty of conversation on what the Knicks should do this offseason now that they’ve been eliminated and they can focus on making the team better. As the front office looks to make tweaks to improve the team, the best course of action may be addition by subtraction—subtracting the older players to make way for the younger talent on the roster. It would behoove the franchise to look internally for long-term answers before they look at trades and free-agent acquisitions. The Knicks have been successful in drafting players in recent years and the answers to all their problems may already be in-house.

Beginning with RJ Barrett, New York is on the verge of signing him to the first multi-year rookie extension they’ve given out since 1999 when they extended Charlie Ward. Barrett has really come on in the last few months and he’s proving himself worthy of that distinction with his growth on and off the court. The 2019 third overall pick has all the makings of a desperately needed franchise player. Barrett has shown growth in every year of his career.

Coming into the league at just 19 years old, he averaged 14.3 points a game; in his sophomore campaign that number rose to 17.5 points; this season he’s up to 20.1 points a night. New York may have answered the most difficult question with Barrett as the face of the franchise; RJ comes with a basketball pedigree as impressive as any, with his father currently serving as general manager of Canada’s national basketball team. His godfather is NBA Hall of Famer and current Brooklyn Nets head coach Steve Nash. “Star-J” has quite the brain trust to lean on as he leads the young Knicks into the future.

Mitchell Robinson, though only in his fourth season, is the longest-tenured Knick and is also due for a new contract. While Robinson is a more traditional NBA center, he is an anchor on defense and rebound machine and looks to be the Knicks’ answer down low for the foreseeable future. The affectionately named “Blockness Monster” can be looked at as the first of this young core when he was uncovered in the second round of the 2018 draft. Robinson seems to have put his early-season injury and stamina woes behind him, only missing one game since the All-Star break after getting back to his old playing weight. Robinson is important to what the Knicks do and has meshed well with the young players. Also playing the most games of his career this season, Robinson has appeared in more than 70 games for the first time.

Second-year guard Immanuel Quickley has really taken off after a prolonged sophomore slump and has become one of the most important Knicks in late-game situations. Since the All-Star break, Quickley has averaged 15.2 points, 5.1 rebounds, and 4.2 assists per game. This increase in production is noticeable as his pre-All-Star numbers were struggling mightly across the board. Over the course of the season, Quickley has become a better shooter, rebounder, and, most importantly, passer. It’s no secret that the Knicks are still looking for a legitimate point guard. Since the Derrick Rose surgery and shutting down Kemba Walker for the season, the Knicks have been playing Alec Burks—out of position—as their starting lead guard, and more often than not has yielded negative results.

Quickley might be the answer the Knicks have been looking for and he’s been right under their nose. While the Knicks struggled to run an offense led by Burks, Quickley has become a capable orchestrator. Most recently against the Orlando Magic, Quickley notched his first triple-double. Though he’s done a commendable job as the sixth man, he deserves an opportunity to start before the Knicks make another rash decision on a quick fix in the open market or trade target.

If the Knicks fail to land a starting-caliber point guard in the offseason, Quickley should be in consideration for the job. The Knicks cannot afford to waste any starting minutes on Burks, Rose, or Walker, all of whom are under contract in 2023; neither one of those guys is a starting player or long-term answer. And, in the cases of Rose and Walker, neither are dependable to stay healthy. The Knicks should look to move on from them.

Obi Toppin, the Knicks’ 2020 first-round pick, has started to make a name for himself in his sophomore season as an electrifying, open-floor player. Earlier this year, Toppin was crowned the NBA Slam Dunk Champion and, since then, has skyrocketed for him. Since he’s entered the NBA, Toppin has been in the awkward position of playing behind Julius Randle. It was a strange decision to draft Toppin as he didn’t fill a need, but lately, Toppin has stepped up in the stead of an injured Randle.

In his seven games as a starter this season, Toppin looks like the total package proving why he was a top-10 draft pick; he’s averaged 15.3 points on 55.7% shooting from the field to go with 7.3 boards and 3.3 assists a game. Toppin has also improved his three-point shooting from 22.6% pre-All-Star break to 34.7% afterward. With the rumors swirling around Randle’s unhappiness in New York, the Knicks could quickly fill the void by inserting Toppin, should they decide to move on from Randle via trade this offseason.

IQ and Obi hyping each other up postgame 🥹 pic.twitter.com/4WZtNtvL7l

While the previously mentioned players seemed to form an impressive “core four,” the New York Knicks have other up-and-comers that have flashed brilliance. 2021 first-round pick Quentin Grimes has shown signs of being a formidable 3-and-D player. Earlier this season, Grimes scored a career-high 27 points and broke the record for three-pointers made rookie by a Knicks rookie in a single game with eight in a loss versus the defending champion Bucks. Grimes is the quintessential modern 2 guard, a lights-out three-point shooter who plays great defense. If the Knicks can get out of the Evan Fournier contract, he is a candidate to step into that role in the near future.

Miles “Deuce” McBride, like Mitchell Robinson, looks to be a second-round hidden gem. McBride has already shown he’s capable of contributing at the top level. Earlier this season, there was a log jam at his position, so the Knicks had no choice but to send him down to the G League. McBride took full advantage and put up video game numbers. Next season, he should have a much larger role on the team and as the Knicks tweak the roster this offseason.

The only in-season acquisition the Knicks made was trading for RJ Barrett’s draft classmate and college teammate, Cam Reddish. Reddish was a hotly touted prospect throughout his amateur career, but injuries have slowed him down in the pros. Despite his limited play, Reddish has already made an impact in the playoffs for his former team, the Atlanta Hawks. He has plenty of potential, Reddish was a first-round pick in the 2019 draft. Reddish can be an impact player for the Knicks as looks to prove himself coming back from his latest injury next season.

In order for these younger players to fully maximize their talents, the Knicks need to get rid of some, if not all, of the stopgap veterans. Players who aren’t long for a team just hinder the progress of potential young talent. The front office signed some head-scratching deals last offseason and it would be in their best interest and the long-term health of the franchise to try and move on from some of them.

For the first time, the Knicks truly have a young group worth building around and they need to take advantage. The season didn’t go as planned but good teams take the good parts and adjust. Despite the season ending early, the Knicks are in place as far as young talent goes—a far cry from the failed selection of Frank Ntilikina and Kevin Knox and the laundry list of others.