No Payton, No Problem in Balanced Knicks Effort Against Kings 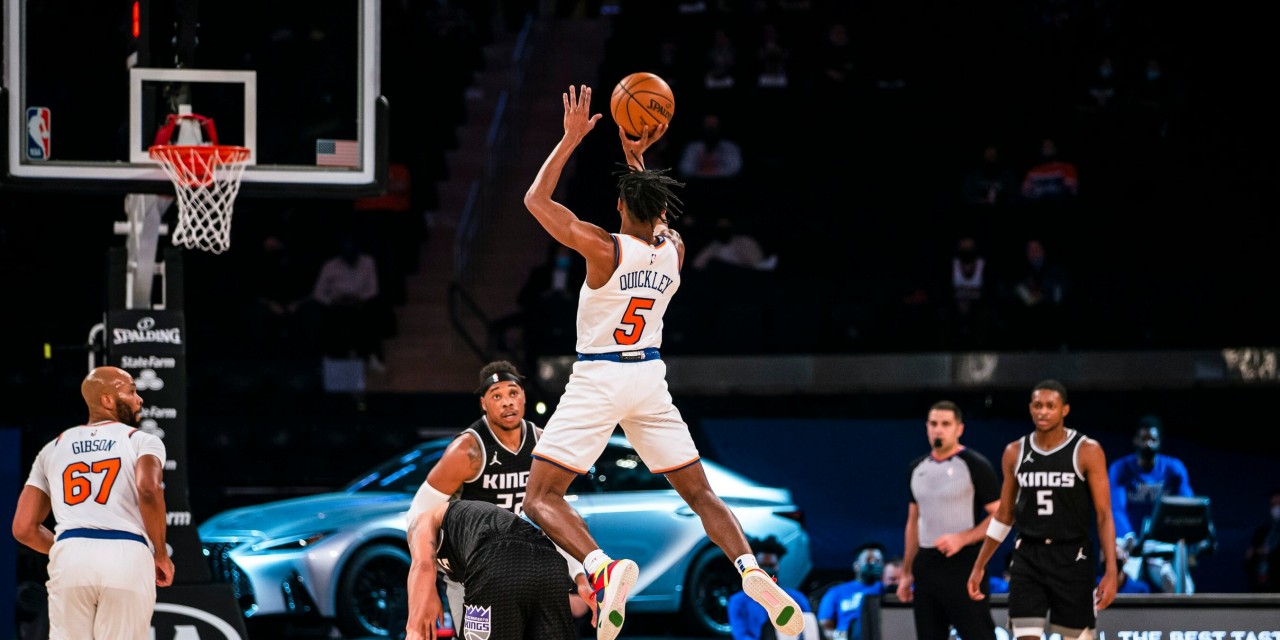 A change to the starting lineup for the Knicks produced their greatest offensive output so far this season in a home win over the Kings.

The New York Knicks (16-17) hosted the Sacramento Kings (12-20) in their second game with fans at Madison Square Garden. The Knicks looked to get their first home win with people in the crowd, whereas the Kings looked to end their eight-game losing streak.

Derrick Rose got his first start at point guard for the Knicks on Thursday since returning to New York as starting point guard Elfrid Payton was a game-time decision and could not play with a sore hamstring.

The subsequent spacing provided by Payton’s absence, however, lifted the Knicks to an offense more closely resembling modern basketball.

This was a game highlighted by a first-time high-powered Knicks offense, although the Kings hung around for most of it until Alec Burks’ hot fourth-quarter shooting and rookie Immanuel Quickley’s instant offense finally pulled away late. While the Knicks saw an all-around balanced effort, the post-game narrative starts with Quickley’s strong performance.

There is so much love in my heart for Immanuel Quickley. Up to 23 points in 14 minutes after knocking down his third 3 ball pic.twitter.com/fzqPC3DTtG

After a hot start from the Knicks and Rose, the Kings threw a counter with a 12-0 run after bringing rookie sensation Tyrese Haliburton into the game. The offense really picked up towards the back half of the quarter with some of the most interesting lineups we have seen including the return of out-of-rotation guard Frank Ntilikina getting playing time in a backcourt with Quickley to positive results. Quickley (25 points on 10 shots in 20 minutes) played the Kings defense to perfection while Ntilikina forced turnovers (three total steals).

Overall, a new sense of ball movement emerged that was not always present for the Knicks with Payton sidelined. The first half was one of the best offensive halves of the entire season for the Knicks, who compiled 77 points. While head coach Tom Thibodeau may not have wanted 62 points allowed to the Kings, it was enough for a 15-point lead going into the break.

R.J. Barrett looked aggressive to start the second half as the Knicks were trying to lift their lead to close out Sacramento. Lackadaisical defense led to easy buckets for the Kings, which kept them alive in a game that should not have been this close. However, New York poured in 101 points through three periods but the game was far from over if you were only looking at the final score.

Alec Burks went absolutely nuclear in the fourth quarter, hitting five three-pointers. This helped the Knicks reach their season-high scoring output with three minutes to go in the game.

Alec Burks is OUT OF HIS MIND!!! FIVE STRAIGHT THREES 🔥🔥🔥🔥🔥 pic.twitter.com/nMEjVaLaMu

After an entire game that felt it shouldn’t have been that close, the score finally matched the performance. With the late Burks flamethrower, the Knicks were at long last able to pull away and finish what could have been a buzzer-to-buzzer blowout.

The Knicks finished with a dominant win with a total of 140-121. There were some questionable decisions from Thibs, but ultimately, this was what every single person was hoping to see in a Payton-less game.

The Knicks will host the Pacers on Saturday at 8 p.m. ET in a big game for standing in the Eastern Conference. They will look to continue the hot offense from tonight in the hope to win that game and get back to .500.