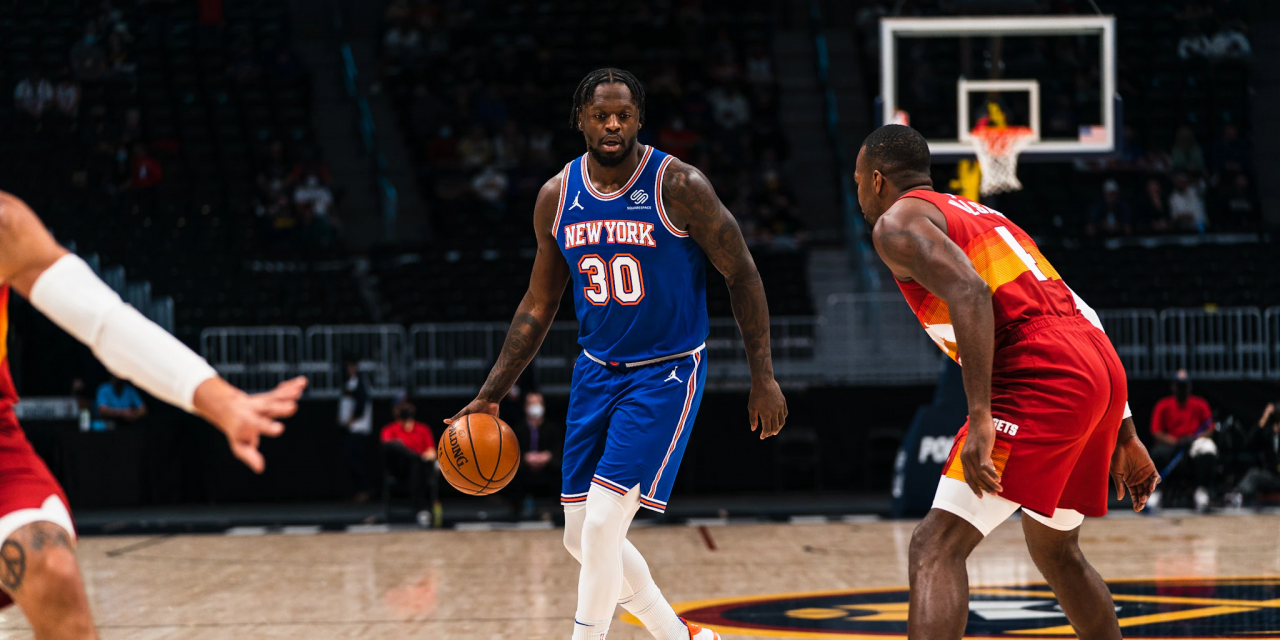 The Knicks did not come to Denver with their best performance, snapping a three-game winning streak as the margin for error narrows even thinner amid a playoff race.

DENVER, Colo. — Well, that winning streak was much shorter than the last. The New York Knicks fell behind early in the first quarter and the Denver Nuggets, led by likely MVP Nikola Jokic, never looked back.

With their 113-97 loss, the Knicks’ three-game winning streak is over.

Things began on a sour note for New York as before 30 seconds came off the game clock R.J. Barrett earned two personal fouls, Nerlens Noel had one of his own, and head coach Tom Thibedeau received a technical foul.

“We can’t allow it on the, but you know probably had some tough calls go against us. … That’s the way it is on the road, you’ve got to play through that and just get ready for the next one,” said Thibodeau, referencing the early fouls called and the team’s subsequent frustration.

“We always say we either win or we learn, and so I think we learned a lot but there’s a lot of fight in this team.”
-Thibs says referencing Taj Gibson diving after a loose ball in the third quarter pic.twitter.com/CjuK6opQBw

Noel added that they had planned to come out and start the game physically, “Definitely made it a focal point to come out [with] a lot more aggressiveness,” he said. “Being the first one to, you know, send a punch.”

After the first quarter, Denver led 34-12 and that was all she wrote. The Knicks actually managed to scrape back a bit, outscoring the Nuggets in each of the following three quarters, but it was too little too late as any attempts to come back fell well short.

“We didn’t come ready to play,” said Julius Randle after the game.

“I’m throwing this one in the trash. Two and one to start the road trip, got a great opportunity in Phoenix so that’s what I’m looking forward to.”
–@J30_RANDLE pic.twitter.com/E80HbFV6fX

Randle struggled from the field, hitting just five of 15 shots and missing all five attempts from deep. He also accounted for a third of New York’s 15 turnovers.

One of the few bright spots came in the form of Barrett shaking off some early struggles from the floor. After missing all seven of his first attempts, R.J. bounced back in the second half to connect on four threes—albeit those were his only makes of the night.

Halfway through their west coast road trip, the Knicks’ schedule doesn’t get any easier. Friday they head to Phoenix before traveling to Los Angeles to face off against the Clippers and the Lakers on Sunday and Tuesday, respectively.

The 37-29 Knicks still have a grip on the fourth seed in the Eastern Conference, but with the five-seed Hawks and sixth-seed Celtics putting up big wins against the Suns and the Orlando Magic, respectively, there is no room for error. Atlanta sits just half a game behind the Knicks, while Boston is two games back.