No, the Knicks Should Not Re-Sign DeAndre Jordan 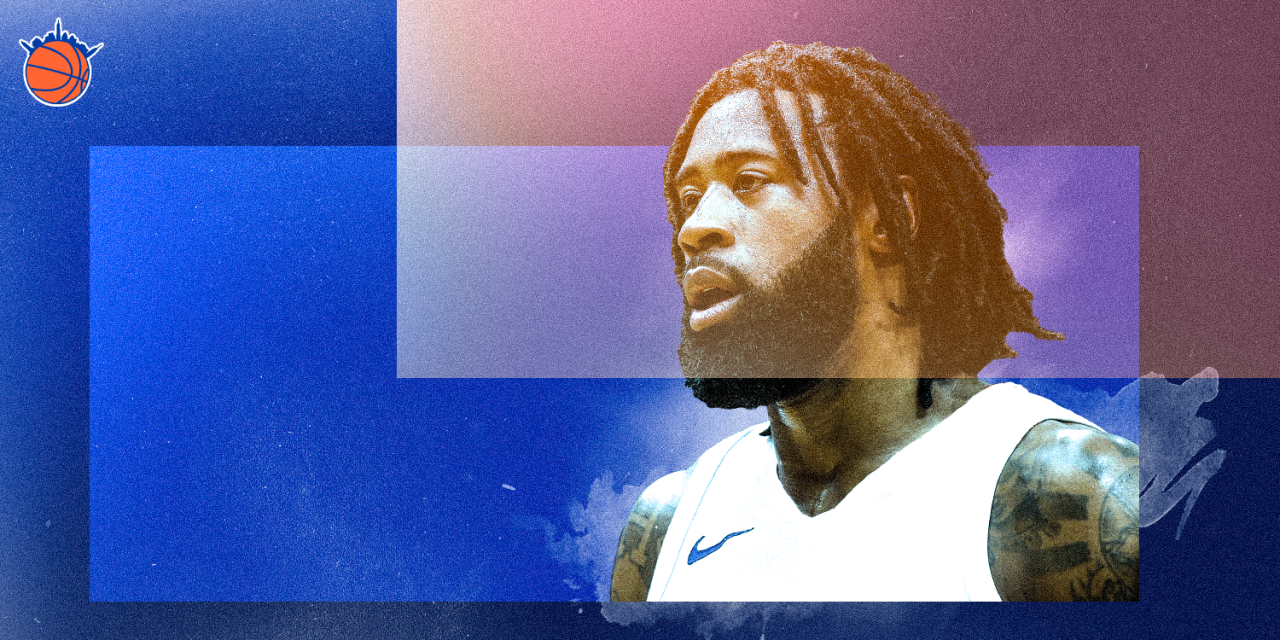 Speculation surrounding veteran center DeAndre Jordan’s role on the team and potentially in free agency has pushed the belief he could be back next year. Here’s why that’d be a lousy idea.

It was super dope and extremely chill when he went Clockwork Orange on Brandon Knight. Remember when he euthanized a moose? Remember when he served as the fearless matriarch of the Hoopers? That’s the good shit. DeAndre Jordan is a former All-NBA player; the last time the Knicks had an All-NBA player on their roster was 2013. He’s one of the most accomplished second-round picks of the decade, if not all of modern pro basketball.

Skulking around the key, Jordan’s screens have made space for Kevin Knox to get shots off in the few games they’ve shared the floor. He’s a mirror and model for Mitchell Robinson. His full-steam rim-running complements Dennis Smith Jr., who is desperately trying to establish a feel for the pick-and-roll at a critical career juncture. There’s no doubt that DeAndre Jordan can provide substantive value to the Knicks’ young core during the final two months of the season.

The most generous reading of a 2019–20 campaign with Jordan is keeping a marketable former All-Star in the Garden. If Knox and Smith Jr. continue to struggle with their jumpers, Jordan would at least be a remedy for screening them to the rim and pushing open some space. There’s a bit of chemistry building with DSJ. Jordan’s lost the step that allowed him to hulk around the paint like a free safety, but he’s still an effective presence defending right at the rim, one good for about four defensive win shares a season. Building a young, lengthy, even switchable defense around the perimeter, plus whatever free agents the Knicks bring in, could translate to a solid defense for David Fizdale to tinker with. You kinda see it, right?

But…nah. New York should not bring Jordan back this summer. If we’re being real with ourselves (requisite behavior while visiting The Knicks Wall), it’s the type of move that would signal continued Dolanism. The Knicks traded their generational talent for cap space. To then allocate some of the cap space for a throwaway player from that trade is…well.

Earlier this week, Marc Berman of the NY Post speculated on a “big three” of Kevin Durant, Khris Middleton, and DeAndre Jordan (this is what dreams are made of). Stefan Bondy of the Daily News reported that the Knicks think Jordan’s friendship with Durant can be used as a recruiting tool.

The veteran center, who has muscled through a decade of grueling minutes and turns 31 in July, has made more than $10 million every season since 2011.

So, let’s not do it! Are we in agreement? Great! Sing that shit from the Penn Station Sbarro.

The friendship with Durant should be a non-starter. Washington tried this angle in 2016, and it was defeated in embarrassing fashion. Go sign Quinn Cook, or promote Royal Ivey, or make roster space for Dipset & Jack Dorsey. It’s an infantilizing strategy that doesn’t really make sense in today’s league, where players maintain close friendships through infinite forms of instant messaging, and, in Durant and DeAndre’s case, business partnerships.

Unless the seven-foot Mitchell Robinson can play extended minutes out of position, Jordan’s presence could clog the development of the Knicks’ best shot-blocking prospect since Marcus Camby. As a rookie, Robinson is averaging more than two blocks a game in under 18 minutes a night, which is damn silly. He’s shooting 70 percent from the field, almost exclusively on lobs and put-backs.

Sound familiar? Jordan would be a redundancy with the 20-year-old on a four-year, $6.5 million deal.

A lot of good players still want to play with Jordan, but his unique skill set is almost impossible to build around without an established identity and a confident defensive presence. Those are two things that the New York Knicks don’t have! Jordan’s excellent defense is applied almost exclusively within the circle; he’s a logical addition to an already competitive group, which is why all the inquiries into Jordan came from teams that were already, you know, good.

There’s a deflating element to making basketball moves on speculation (love you, Amar’e). Jordan is an asset in teaching game to Robinson and immediately building confidence for Knox and DSJ. It should end there. Centers get unceremoniously played off the floor every year. Let’s save ourselves the spectacle.

Go to greener, less orange pastures, my man. And if the Knicks’ Durant strategy is to just add all his friends, well, get a table at Marquee for KD and DSJ and J. Cole, or something. At least be smarter about it.