For the Knicks, Noah Vonleh’s Hard-Working Attitude Is a Blessing for Now and Later 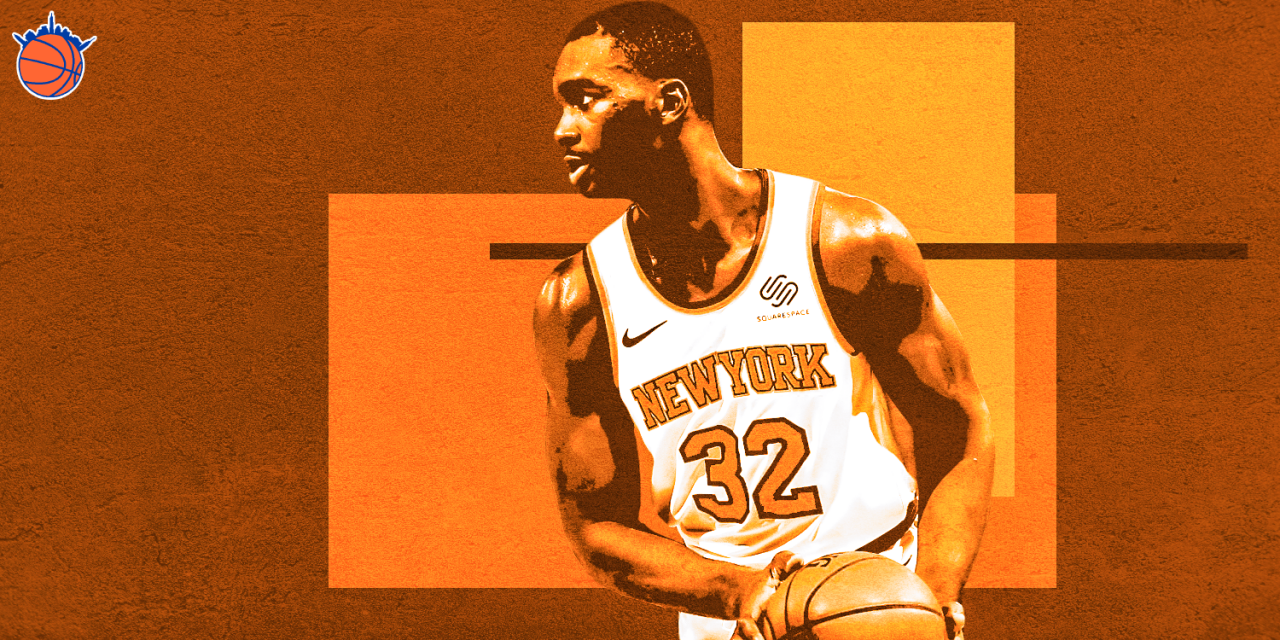 Noah Vonleh continues to be a fun surprise and solid offseason signing by Perry and the Knicks. Let’s dive into how Vonleh has impacted the team on the court and whether the 23-year-old fits into the franchise’s future plans.

Coming into this season, head coach David Fizdale talked up the possibility of someone playing the “Draymond Green role” for his rebuilding New York Knicks squad. Somebody that could switch on a whim, stretch the floor with some consistency, bring the ball up the court, and above all else, do some of the dirty work that doesn’t show up on the stat sheet.

Lance Thomas, the longest-tenured Knick, was expected to be that glue guy. Fizdale talked up Thomas, almost to a fault, but even at the time of Fizdale’s comments regarding the Knicks veteran, things just didn’t add up. For starters, he hasn’t been fully healthy since the beginning of the 2016–17 season, and despite his intangibles, leadership qualities, and defense-first mentality, he’s never been a guy that’s played real starters minutes. Or, really, ever been a regular starter.

Following a strong preseason showing, Thomas faltered come regular season and lost his starting job to the Knicks’ latest reclamation project—Noah Vonleh—before ultimately getting shut down due to injury. After 19 games as the starting 4, Vonleh looks like he’s solidified the spot going forward. He’s everything Fizdale wanted in Lance Thomas—and more.

The Knicks Most Complete Player

Vonleh, who is still just 23 years old, never showed flashes of being this type of player during his first few years in the NBA. Known more for being a solid rebounder (in a league that values the skill less than ever) with a limited offensive game, Vonleh looked position-less, role-less, and frankly, hopeless.

But that was before the Knicks took a flier on him.

Despite his shortcomings, Knicks GM Scott Perry looked at some of his pre-NBA tapes. And he was impressed. Vonleh showed he had a well-rounded skill set—he just hadn’t gotten the opportunity in the league to properly showcase it yet. Even head coach Fizdale wasn’t aware just how nuanced Vonleh’s game was.

“I didn’t realize how versatile he was,” New York coach David Fizdale told CBS Sports. “And [general manager] Scott Perry just kept saying it to me. He said, ‘Coach, when this kid was in high school, man, this kid could do everything.’”

In this case, it’s a compliment. And it’s one that certainly can be applied to the play of Vonleh this season.

To start the year, Vonleh was entrenched as the backup center to Enes Kanter, giving the Knicks solid production at the pivot spot. It wasn’t until the first starting lineup (Burke, Hardaway, Ntilikina, Thomas, and Kanter) began to sputter, that the real Vonleh was unleashed.

Vonleh took Thomas’ starting spot in the lineup back in October and hasn’t looked back since. On the season, he’s averaging 8.4 points on 50.6 percent shooting, 8.0 rebounds, 1.8 assists, and 0.9 blocks over 25.5 minutes per game—easily all career highs (per NBA Stats). But it’s some of the stuff he’s done that doesn’t necessarily show up on the stat sheet that has been the most impressive.

Noah Vonleh is on pace to set career highs in:

Even more shockingly, the Knicks actually play like a 42-win team when Vonleh is the on the floor.

Knicks' leaders in expected wins this season, entering tonight (according to Cleaning The Glass)
Noah Vonleh: +30 (play like a 42-win team with him on the floor)
Damyean Dotson: +14
Emmanuel Mudiay: +9
Those are the only 3 Knicks in the positive and have played major minutes.

For starters, Vonleh has LEGIT handles. Not only can he get a rebound and bring the ball up in transition, but he’s got some pretty nifty handles. He can go between the legs and behind the back with relative ease. Again, this is reminiscent of what Draymond Green does for the Warriors. Vonleh isn’t the playmaker Green is quite yet, but he’s at least shown the ability to push the ball up the court after a miss—something that can help facilitate the up-tempo offense the Knicks want to run.

Noah Vonleh has managed to stretch the floor (surprisingly) well on offense as well. Vonleh has never been a strong outside shooter, and his lack of attempts have only added to his pedestrian outside shooting numbers for his career. Before latching on with the Bulls last season, he didn’t come close to attempting one whole three-point shot a game (his previous career high in attempts was 0.6 during his sophomore campaign). However, on the Bulls, who ran a similarly modernized offense under now ex-coach Fred Hoiberg, Vonleh jacked up 2.9 a game—a huge outlier from his career numbers up until that point. While he didn’t have much success, shooting just 30 percent overall over 24 games, it foreshadowed his future role as a playmaking stretch four.

Coming into this year, Vonleh was a bit hesitant from downtown. He typically feasted on an array of posts-ups, drives to the lane, and offensive put backs. He would take the occasional trifecta, but it wasn’t until Coach Fiz and the rest of the staff noticed a glaring issue in Vonleh’s form—his release point was too low, resulting in an influx of line drive attempts that were often short—that the fifth-year player really acquired confidence in his shot. Now on the season, Vonleh is shooting a blistering 44.7 percent from behind the arc, and he’s been particularly deadly from the corner. Since tinkering with his shot, however, his range has extended to the top of the key.

Noah Vonleh is perfect from the field — here's his latest, a three-pointer from the top of the key: pic.twitter.com/XY1MQqrwIe

Vonleh’s newfound range not only helps his own offensive repertoire as an undersized big but also helps spread the floor for his teammates in Fizdale’s free-flowing attack.

One area where Vonleh has also shown improvement is his passing. While his 1.7 assists aren’t anything to write home about, he often times brings up the balls for the Knicks and makes the correct entry pass to initiate their halfcourt offense. Again, this doesn’t show up in the stat sheet, but it’s that type of versatility and fundamentally sound team play that helps Fizdale run a modernized offensive attack.

But Vonleh’s greatest asset, unequivocally, is his versatility on the defensive end of the floor. Not only is Vonleh now typically tasked with defending the opposing team’s best frontcourt player, but his athleticism gives him the ability to guard the 1-5 in the Knicks’ switch-heavy defense.

The Knicks signed Noah Vonleh on a partially guaranteed deal with a roster spot only promised once Joakim Noah was waived.

Now he is defending Giannis and holding his own. As a 5!!! pic.twitter.com/AKVAA6VLfK

And while Vonleh might be undersized at 6’9”, his impressive 7’4” wingspan makes him an above-average help defender at the 5 as a small-ball center. Like Green, Vonleh is strong and athletic enough to play that 5 position, which helps the Knicks immensely in defending opposing team’s point guards in the pick-and-roll. With Mitchell Robinson still a raw talent (not to mention underwhelming on the boards), Vonleh is perhaps the Knicks’ best option at center down the stretch of tight games. With him on the court, particularly at the 5, the Knicks essentially have five players who can all bring the ball up the floor after a defensive stop or forced turnover.

Does He Have a Future With the Team?

The short answer: yes. Vonleh is one of those rare players on a bad team who might actually put up better numbers on a more talented team.

With less of an offensive burden, Vonleh could settle even further into the aforementioned Draymond role. He can continue to do all the little things that might not fill up the stat sheet and focus most of his energy on defense, rebounding, fighting after loose balls, and pushing the pace on offense. And if his current upwards trajectory is any indication, Vonleh appears to have figured out how to hit the long ball with consistency. That, too, should only improve with time.

Vonleh also projects as an ideal fit next Porzingis, again, because of his ability to do the dirty work that a “finesse” big like Kristaps might have some trouble doing—especially coming off of an injury. His bulldozer-like strength is certainly a good complement for the Knicks’ prized big man.

One potential scenario for the Knicks and the former Hoosier would be signing him to the mid-level exception (which projects to be somewhere around $5.1 million). With the Knicks finally tapping Vonleh’s potential as perhaps not a star player but a solid, versatile frontcourt starter might be enough for the two sides to strike on a win-win type deal. We might only be a little more than a quarter of the way through the season, but the reclamation project that is Noah Vonleh has definitely been one of the underrated storylines for a team going through a rebuilding year.

The only question remains, is whether or not he will continue to be a part of their “process,” going forward.