Not Ready to Part With RJ Barrett 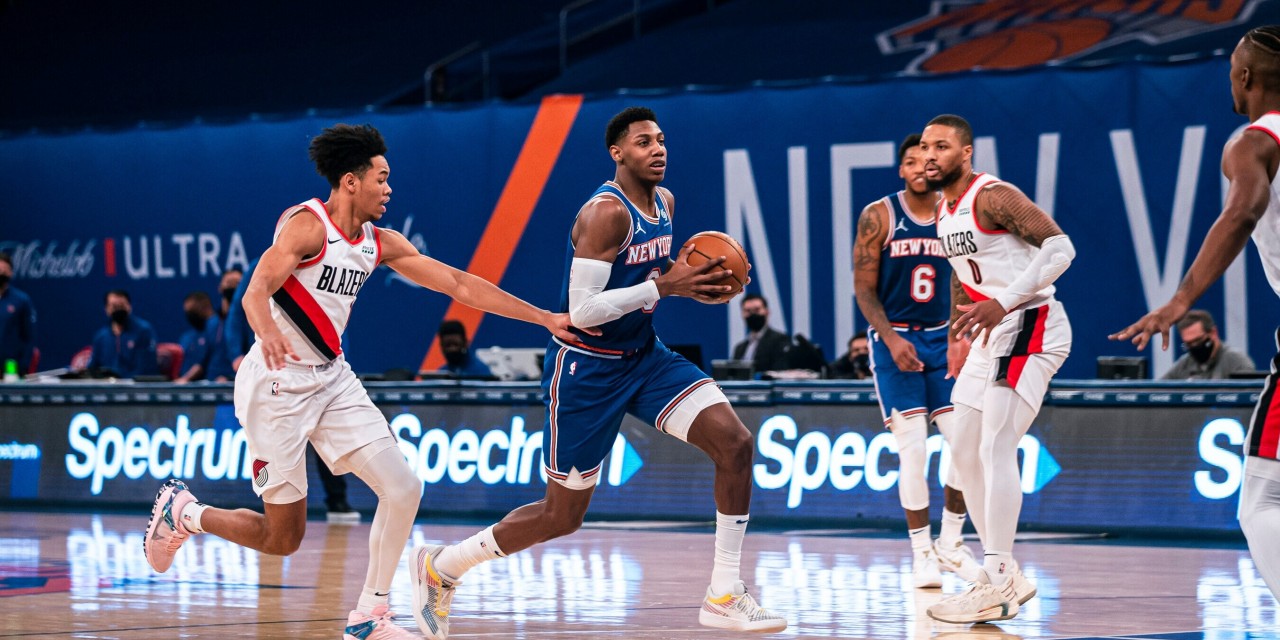 With speculation swirling surrounding the chance to trade for Damian Lillard, among others, it’s easy to forget the prospect of the homegrown star, RJ Barrett.

For the first time in nearly six years, I did not read a single news clip or peruse any possible rumors on Twitter. But, as you might imagine, once I plugged back in, I was giddy to see the Damian Lillard trade rumor smoke thicken. Following the Portland Trail Blazers’ unpopular hiring of Chauncey Billups, Damian Lillard bore the brunt of the backlash, which led to Yahoo Sports’ Chris Haynes re-upping the possibility of Lillard wanting out of Rip City.

My initial reaction was excitement. The Knicks finally had someone worthy enough to cash those assets in for. If and when Lillard becomes available, it is likely that he would have a say in where he lands. Johnnie Bryant’s relationship with Lillard is not a false narrative. There is no other reason Lillard would ever want to play for the Utah Jazz in 2017 other than to be with Bryant, who was with the Jazz at the time.

If blazers said they didn't want me… Utah Jazz or Lakers https://t.co/jep3V9qRsS

The endorphins rush I had of the mere possibility of Lillard rocking orange and blue threads subsided abruptly; in its place was angst.

I quickly realized that to land Lillard would cost the Knicks their kids. The kids that we had spent the last year watching mature into a playoff team well ahead of schedule. Chief among those kids, and the headliner of such a blockbuster trade, would be R.J. Barrett.

Suddenly, I was Larry David at the end of “Palestinian Chicken”; on the one hand, having Lillard would be a dream, and on the other, I really do not want to include Barrett in any deal.

Lillard is one of the few players in the NBA that has name recognition beyond the hoops world. In addition, he has the personality to thrive in the NYC market and an electric playing style that would help Madison Square Garden set decibel records and keep the Knicks on the upward trajectory in the relevance department.

The main roadblock in acquiring Lillard is the decision to include R.J. Barrett, the 21-year-old starting to look the part of a rising star, in a deal. If R.J. must be included to make this dream come true, count me out.

I acknowledge how foolish it is to draw a line in the sand for the only point guard in the league worthy enough to be in the same tier as Stephen Curry. However, it is part of the tough conversation accompanying seismic deals that fans like to gloss over when fantasy booking opening night lineups. Most fans do not enjoy these tough conversations mainly because sports is an outlet to escape our daily lives, which consist of tough decisions and conversations—but they must be had.

This is Not The ‘Melo Deal

The most important thing to remember is a Damian Lillard trade would not be the Carmelo Anthony trade 2.0; a Lillard deal would require parting with franchise building blocks.

Barrett, in particular, just put together a sensational sophomore season where he took sizable leaps in swing-skill areas of his game. That progress is starting to be noticed by those outside of the NYC area. For example, following an Olympic qualifier against Greece in which Barrett scored 22 points for Canada, Rick Pitino, coaching the Greeks, had a glowing review of Barrett’s development following the game.

“Barrett in college couldn’t really shoot a 12-foot shot, and I absolutely love players that work at their game and get better,” Pitino said. “I’m obviously a big Knicks fan, so I’m a big RJ fan, but the fact that he’s improved so much is amazing to me.”

The Knicks Are Not A Move Away

Unlike Julius Randle, who is just hitting his prime, Barrett is just scratching his surface. From a financial point of view, Barrett is under team control at a much lower price for the foreseeable future, making him the more appealing player out of he and Randle to make a big move with. Barrett could theoretically be a Knick for 10 years and still be well in his prime when he is up for a third contract.

Assuming that Barrett pans out as a star player requires an optimistic imagination. Development is not linear, and there is no telling what happens a year or two from now. And yet, a steady build towards title contention with Barrett at the forefront requires less optimistic imagination than a Lillard blockbuster vaulting the Knicks to the front of the line in the East does.

Don’t get me wrong; there are avenues for a Lillard trade sparking a superstar cast worthy of going toe-to-toe with Brooklyn’s big three. For example, let’s say Lillard was acquired, and Kawhi Leonard, who is watching Paul George perform exponentially better without him in the Western Conference Finals, is interested in another relocation. The team could add Leonard, then take care of Randle. A trio of Lillard, Leonard, and Randle certainly pushes the Knicks to the top of the East.

This is where realism has to set in. What are the chances of that situation materializing? Lillard surely has friends throughout the league, but it does not strike me as someone plotting superteam plans like Kyrie Irving or LeBron James before him. Lillard is a lone wolf.

If Lillard were to join a roster that was Randle, Mitchell Robinson, and spare parts, is that really utilizing the latter years of Lillard’s prime?

That is where another tough conversation must be had on where the Knicks actually stack up in the East at this moment. They are not a move away despite their strong 2020–21 campaign. The progress made by Randle, Barrett, Immanuel Quickley, and Obi Toppin is real. However, undeniable teams like the Boston Celtics, Toronto Raptors, and Indiana Pacers had off years and could bounce right back to reclaim the Knicks’ spot in the final standings.

The more prudent approach, to me at least, is to continue to improve and make bigger splashes without reducing the headcount of the team’s promising core and see what opportunities arise.

Beyond Barrett and the surplus of draft picks, names like Quickley and Toppin would almost certainly have to be included in a deal if one is made this summer. The Blazers will have no shortage of suitors, including the Philadelphia 76ers, who can trump most, or all, offers if Ben Simmons is made available to try and make one final push with Joel Embiid. The Knicks do not have the personnel to match that.

If Lillard does stay put for now, maybe the price goes down to where Barrett can be saved. Lillard’s gaudy extension kicks in this season. The Blazers will be happy to pay Lillard $40-plus million per year while contending, paying that annual amount during a rebuild is a different conversation.

The longer the Blazers wait to make a deal, the better the Knicks’ chances could become.

The common ingredient in the two periods of sustained success for the Knicks has been homegrown talent. Willis Reed, Walt Frazier, and Patrick Ewing are all players drafted by the Knicks, developed by the Knicks, and became stars for the Knicks. There are blips of good seasons outside the periods, but nothing lasts longer than a few seasons.

New York basketball at large, both the Knicks and Nets, have not had a homegrown star to champion since Ewing. First, the Nets brought in Jason Kidd, Vince Carter, Kyrie Irving, Kevin Durant, and James Harden. The Knicks brought in Anthony, Allan Houston, Latrell Sprewell, Bernard King, and Randle.

The list of imported stars can go on for some time. However, Barrett has a realistic chance to buck that trend. At just 20 years old, the former Duke forward averaged 17.6 points per game, pulled down 5.8 rebounds, and dished out 3.0 assists all while improving his shooting numbers significantly to 44.1% from the floor, 40.1% from three, and 74.6% from the free throw line—all after just one offseason.

What Barrett ultimately pans out to be is still to be determined, but he has given believers every reason to be bullish on his star prospects. And his strong second season was good enough to buy him time to prove himself further.

At his greatest aspiration, Barrett could very well be a two-way terror of Jimmy Butler or Jaylen Brown’s class. Of course, we already know that is not enough to win a title. But with more time, another star could be easier to acquire, or maybe Barrett surpasses even the most optimistic projections and becomes a bigger star than we realize.

The overarching point is time is on the Knicks’ side for once. Acquiring Damian Lillard makes all the sense in the world. Tom Thibodeau would have the superstar for whom he was searching upon arrival. The front office, whose strength is player relations now, would be equipped with a compelling argument searching for a third star.

But the cost is too high, to me at least. For the first time in my lifetime, and many others’ lifetime, the Knicks have a young star developing at an accelerated pace. In just one year, he vastly improved, which strongly impacted the team’s rapid turnaround.

Looking back on this in a few years, I may feel stupid for even writing this, but it wouldn’t be the first time I’ve felt stupid. Damian Lillard is a star today, but R.J. Barrett could be a star, New York’s star.