Ntilikina: Under the Microscope

Frank Ntilikina will be a big part of the impending New York rebuild. What should we expect from him?

The 2017–18 regular season is almost here, and for New York Knicks fans, that means they can finally see the 8th overall pick, Frank Ntilikina, in action.

Folks have waited months just to see more than a half-speed Instagram video of the 19-year-old French point guard in play, especially since the exploits of Dennis Smith, Jr., during the summer league. Like it or not, Ntilikina is under the microscope. As another important piece of the front office’s youth movement, he’ll be criticized from Day 1.

With the meager amount of tape and data available, it’s difficult to create a baseline for his abilities. Down the line, he’ll be compared to his peers who may be lights out for games at a time, in addition to athletic demigods that will have Twitter abuzz, even though his upside was never either. (Ramon Sessions already claimed to see a bit of Kyrie Irving in Ntilikina.) Tragically, Ntilikina inherited Carmelo’s curse: He’ll be compared to the most successful guards in his class even though their skills were never, and will never be, the same.

Nevertheless, Knicks fans must use their two most honed personality traits, levelheadedness and patience, if they hope to appraise his contributions to the team. In short, a strength-based approach is the only sensible way to evaluate Ntilikina. 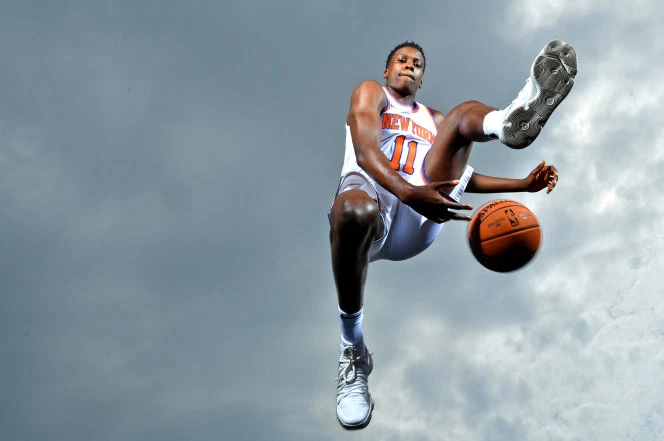 From the onset of scouting, Ntilikina’s 6’5″ height and 7’0″ wingspan made him the defender of the future. In time, his title as point guard would be irrelevant on defense. If his defense ends up where it is projected to go, then he’d be the defender guarding the best player from PG to SF. However, on Day 1, it’s unreasonable to expect lockdown defense from a 19-year-old.

For right now, one player’s early defensive statistics fans can compare for Ntilikina’s rookie year is none other than former Celtic Rajon Rondo. Truthfully, Ntilikina and Rondo have little in common physically, but what Rondo brought to Boston’s backcourt is what the Knicks hope Ntilikina can emulate.

Rondo’s defensive rating for his first year in Boston was 100.5. Not bad (really good actually) averaging 23.5 minutes per game (via NBA.com/stats). Individual defensive rating is highly influenced by team defense, but his rating was the best among all Celtics that year who played more than 15 minutes per game. The next year, it decreased even further, but the top spot was taken by a player with a more comparable frame to Ntilikina. That man, 6’4″ combo guard Tony Allen, boasted a 98.8 defensive rating his rookie year in 2004–05. Next in line was center Mark Blount, and then 27-year-old All-Star Paul Pierce.

The early and mid-2000s were a different NBA. Today, opposing back courts command deadly shooters who can easily ruin the fragile metrics NBA analysts use to quantify defense. If Courtney Lee doesn’t end up a casualty of a trade, he and Ntilikina could offer legitimate defensive statistics.

For the advanced metrics heads out there, if Frank can finish the season, or a portion of it, with a defensive rating of less than 103, he’s not doing bad, and most likely, he’ll get better.

In basic stats, if Kyrie, John Wall, or Isaiah Thomas, don’t light him up for 25 points and/or 10 assists on a regular basis he probably played good on-ball defense, which is a decent expectation from a rookie in today’s NBA.

For those eye test fans, if you can go the game without saying, “What the fuck?! He just blew past you? You’re just gonna let him go right past you? Might as well switch team jerseys. Just put on a hat and tell him welcome to Shake Shack, you fuckin’ rookie,” as he gets burned on the way to the hoop, he may have “the clamps.” 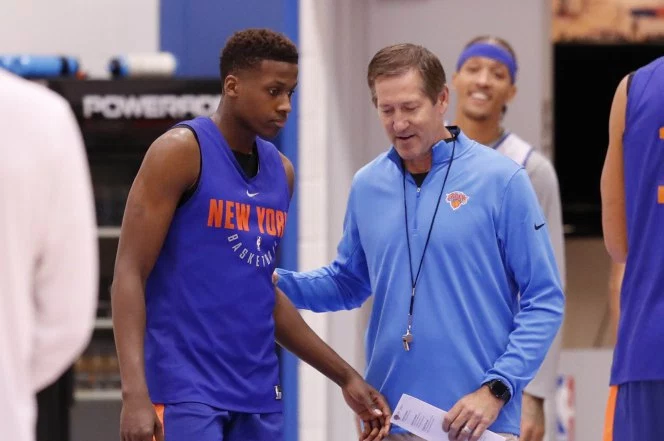 Let’s nip this in the bud right now: Frank Ntilikina will never be a premier shooter. He’ll never be a lights out shooter. That wasn’t what he was drafted for and it’s doubtful it will ever be in his skill set. Quit dreaming. Quit lying to yourself.

What he can do is find his spots and shoot wisely. One silver lining Knicks fans can look forward to is the peace of mind knowing that Ntilikina will not jack up shots like Russell Westbrook, or Steph Curry, or James Harden in a Houston night club.

However, picking your spots is harder than it sounds. As a 6’5″ point guard with his wacky-waving-inflatable-arm-tube man-length appendages, it seems like he’d excel just going over defenders everywhere on the floor. That’s just not the case. Four of the six point guards taller than 6’4″ (Whitehead, Carter-Williams, Exum, Wright) who scored over half of their points from within the paint had field-goal percentages below 45 percent last year. The outliers were Elfrid Payton, who shot 47.1 percent , and Shaun Livingston, 54.7 percent, from the floor (via NBA.com/stats). Also, among all six, fewer than a third of their points came from long-range, showing that being a tall point guard usually doesn’t pay the dividends the 2K games thinks it should. Even more, Ntilikina doesn’t even have the speed or ball handling skills to get to the basket or create his own shot. In other words, shooting over shorter defenders at a high clip is generally a myth for point guards, especially young ones, under the normal condition that their defender is also a point guard.

So, if Ntilkina can’t rise over shorter defenders from distance and lacks the ability to get to the basket, how is he even going to be able to score at the NBA level?

No one can say for certain how the Knicks offense will be set up, but since it’s Porzingis team to lead, Hornacek would be a fool not to utilize his versatile scoring with the pick-and-roll as a vehicle. Although he only ranked in the middle of the pack (54.6 percentile) when it came to pick and roll execution this past season, there’s no reason to believe that a young, generous point guard would pass up on his team’s first scoring option. Porzingis rolling to the basket or just fading to the three-point line would open up a hole for Ntilikina at the mid-range while a defense recovers. The attention Porzingis requires from defenses could cause them to panic, forgetting that Ntilikina can capitalize on those moments alone if a quick pass around the strike is available.

While Porzingis is the first name that comes to mind the more efficient pick-and-roll big man is his buddy Willy Hernangómez. In the 2016–17 season, Hernangómez ranked in the 78.9 percentile in the PnR, securing a shooting foul 11.9 percent of the time and scoring at 56.3 percent frequency (per NBA/Stats). It seems the best way for Ntilikina to make himself useful immediately is to capitalize on pick-and-roll opportunities with his European big men teammates.

So, if stats savants want something to keep an eye on, look out for Ntilikina’s AST% and assist-to-turnover ratio (AST/TO). Among rookies who played more than 15 minutes per game, the highest AST/TO was 3.02. If Ntilikina can finish near 2.0, dishing out two assists for every turnover, he’d be at the forefront of the past year’s draft class, which, by far, had way less hype than the big-name rookies going pro this fall (Ball, Fox, Smith, Jr.). Ntilikina’s AST%, the percentage of field-goals the player assisted on while on the floor, would be adequate at 20 percent. It would put him behind Malcolm Brogdon and a few steps in front of Ron Baker, but expecting his passing to be on the level of Lonzo Ball is foolish and unrealistic.

Old-fashioned fans can just count how many times they pull their hair out per game due to ill-advised passes from the rookie point guard.

For scoring opportunities, there’s not much to say. He wasn’t drafted to be a sharpshooter, but high hopes of developing him into one are exactly that: high hopes. His defense and basketball I.Q. allowed him to play against grown men since the age of 17 and are the skills he was drafted for. A lot can be learned, but those are his “weapons” that will keep him alive in the NBA. Realistically, anything else is an added bonus.

Ntilikina has been a question mark since the day he was drafted. Very few comparisons for guards of his build exist, mostly due to very little information about him being available. The only thing that is certain is his elusiveness. His mystique is akin to Porzingis when he was drafted: both debuted in European leagues as teenagers and were reserves upon entering the draft. While Porzingis’ title of “unicorn” is fitting as he is one among none, it’s possible that lightning struck twice at The Garden. New York certainly hopes so.