The Numbers Are Catching Up to RJ Barrett’s Progress 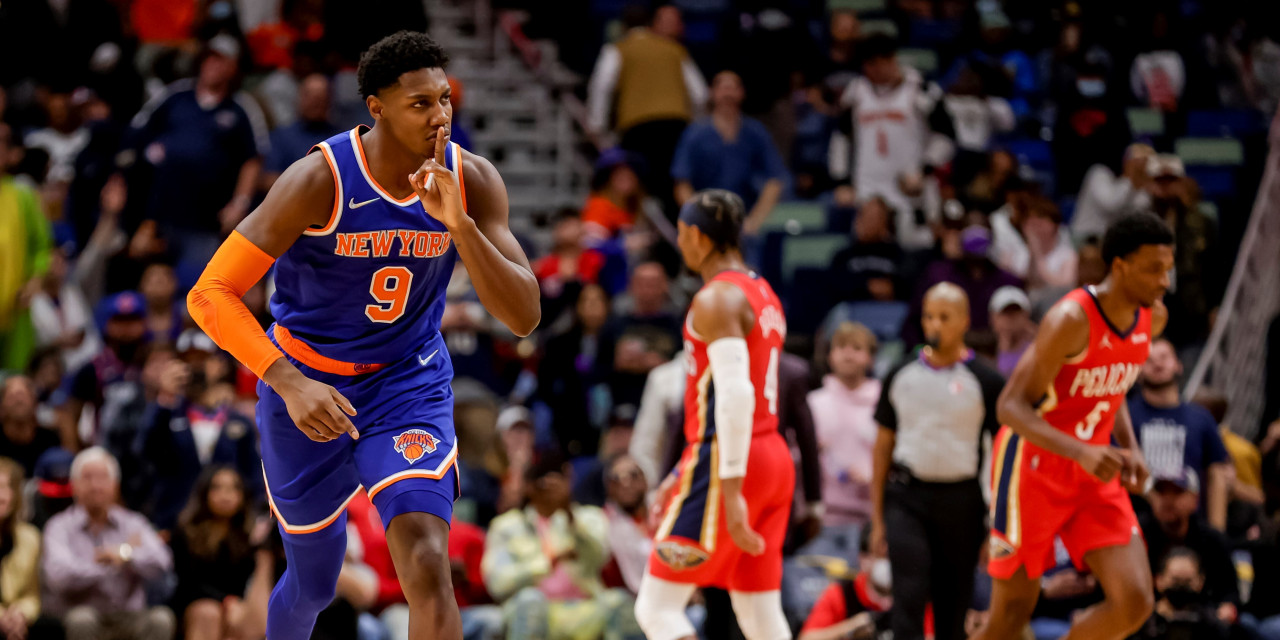 With so much talent around him, it can be hard to stand out if you’re RJ Barrett. However, the third-year wing has done just that in the early season.

“Come with a classic, they come around years later and say it’s a sleeper.”

That Drake line has been running on a loop in my mind following Saturday’s masterclass by RJ Barrett.

Saturday night in New Orleans had all the makings of a letdown game. The New York Knicks came into town following a close call in Chicago and facing a Pelicans team that was down Zion Williamson and Brandon Ingram. For a moment down the stretch, it felt as if a letdown loss was all but inevitable.

The Pelicans that did suit up Saturday played with no fear and, throughout various moments of the game, put the Knicks on tilt. Tom Thibodeau’s bunch did not fold, thanks in large part to the play of his third-year wing.

The Warden, Broadway Barrett, Star-J Barrett, whatever you wish to call him, just say it with some respect. Barrett kept this game within his grasp the full way, starting the game out hot, taking over in the third quarter, and ultimately closing the game out. It was the culmination of every argument Barrett bulls have preached on Twitter for the past two years.

Usually when arguing on behalf of Barrett, one has to evoke the phrase “close the laptop and watch the game” because so much of what Barrett currently does well may not always pop off the box score.

Barrett’s defense has been the headline grabber this season. Rowan The Warden has been Thibodeau’s best perimeter lock, holding matchups to 35.5% shooting and coming through in the clutch with late-game stops versus Jayson Tatum on opening night and DeMar DeRozan on Thursday.

As good as his defense has been, Barrett’s lack of scoring was more of a talking point. MSG Network’s Mike Breen said it a few times during the game—while the numbers have not reflected it just yet, RJ Barrett is a much-improved player this season, on both sides of the floor.

On Saturday, the numbers caught up. Barrett tallied a career-high 35 points, including a strong 6-for-8 from deep, to go along with eight rebounds and six assists.

Beyond the career-high scoring night, what made Barrett’s breakout performance extremely encouraging, was when and how he got those points. When the game hung in the balance, Barrett poured in nine points in the final two minutes to seal the win.

Barrett got to the rack at will, changing gears and using his strength to muscle to the rim. Most importantly, though, he flashed some pull-up three-point prowess. Last year’s sharp increase in three-point percentage was rooted in strong catch-and-shoot makes, where he connected on 41.0% of those attempts compared to 30.0% on pull-ups.

Of the six three-pointers Barrett hit versus the Pelicans, four were pull-ups, including the final dagger.

Barrett has yet to fully master this final frontier of long-range marksmanship. Prior to the Pelicans game, Barrett had taken about 15 pull-up three-pointers through his first 128 games.

The evolution of Barrett’s offense remains the focal point in the discussion of where exactly his ceiling is. He has proven he will already be a two-way contributor, if he can also add a reliable three-level scoring repertoire, the sky is truly the limit. In addition to the fan euphoria, Barrett’s rise makes life easier for Julius Randle, and further cements the Knicks as a team you can pencil into the playoff picture.

Some will continue to sleep on Barrett’s progress, but at some point, numbers will back up what many have seen already: RJ Barrett is a good basketball player and a key player in one of the Eastern Conference’s best.