The Numbers Game: What Defined the Knicks and Hawks’ Regular Season Matchups 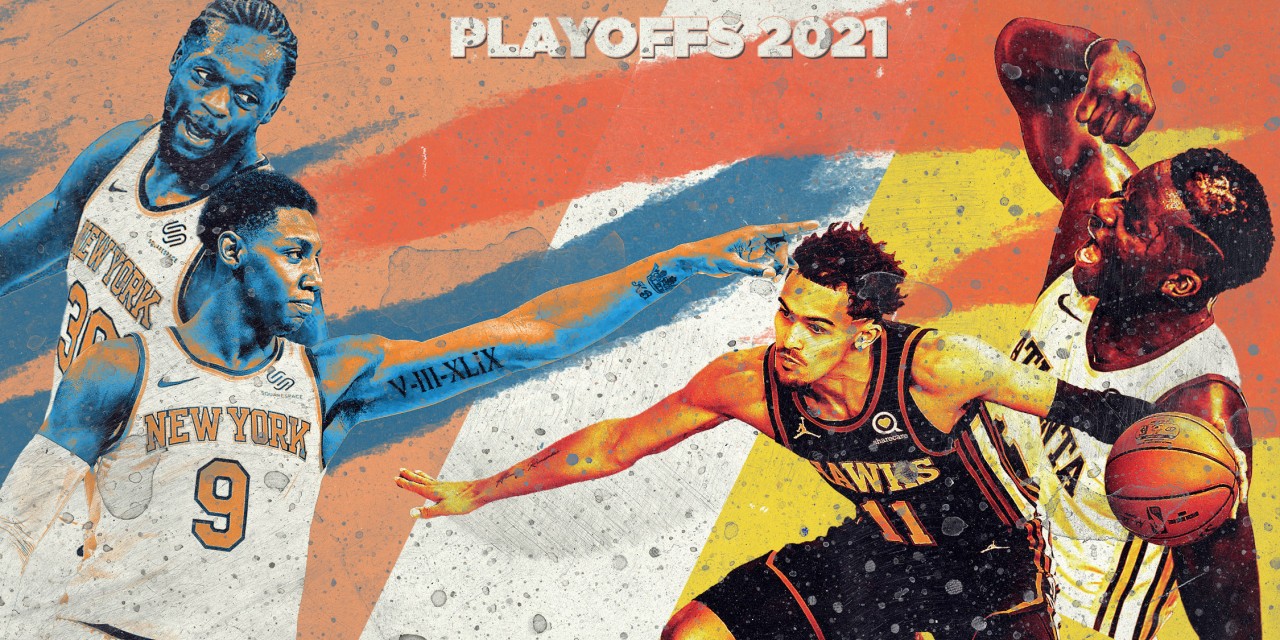 The Knicks swept the Hawks in the regular season, but a few numbers stick out as achievable goals to ensure playoff wins in the postseason series.


The truncated 2020–21 NBA season is now in the rearview mirror. Soon begins playoff basketball and all the drama, intensity, epic moments and performances that come with it.


This time around will be different for New York Knicks fans: the orange and blue are partaking in the festivities. After everyone and their grandmother foretold New York wouldn’t sniff playoff contention, the ‘Bockers defied even the most optimistic preseason predictions with a lunch-pail, defense-first identity.

The Knicks hold the fourth-best record in the Eastern Conference at 41-31, identical to their first-round adversary, the Atlanta Hawks. Considering the two teams’ equal win/loss marks, one might be inclined to believe the season series was a toss-up—this is not the case. New York and Atlanta clashed on three separate occasions across the 2020–21 calendar: January 4th, February 15th, and April 21nd. All of the face-offs ended in New York wins. The average margin of victory was 8.67 points.

It would be silly to overreact to a three-game sample size. The Hawks are no pushover. Trae Young is a sharp-shooting superstar, capable of dropping 30 points on a nightly basis. John Collins and Clint Capela are interior forces, an ideal offense-defense pairing down low. Bogdan Bogdanovic has contributed nicely in the scoring department, and Lou Williams, a mid-season acquisition, is a prolific bucket-getter who demands attention from the defense.

If you think the Hawks are an easy matchup, don’t.@RealEarlMonroe explained why Trae and the Hawks could be a dangerous opponent on @TKWPodcast. pic.twitter.com/fqaMy8pBzE

With all that said, trends emerged during the three regular-season games between New York and Atlanta that the Knicks should aspire to replicate. Here are a handful of noteworthy statistics from the 149 minutes of gameplay.

Julius Randle and R.J. Barrett are New York’s premier offensive weapons. Against no other team did this become more apparent than the Hawks. The dynamic duo combined to torch Atlanta for 58.3 points per game on astoundingly accurate 61.9/57.6/80.0 shooting splits.

Beginning with the MVP candidate, Randle dropped 40 or more versus Atlanta twice. His top performance came on February 15th, when he accumulated 44 points, nine rebounds, five assists, and led the team in plus/minus with a +17. Simply put, there’s no frontcourt member on the Hawks with the defensive skill set necessary to contain Randle with any consistency.

Atlanta threw everything and the kitchen sink at Randle. Collins, Capela, Onyeka Okungwu, even Danilo Gallinari. Nothing worked. Randle is what some call a guard in a big’s body, which creates a matchup nightmare for the slow-footed Hawks behemoths accustomed to defending traditional interior players. The former Kentucky standout had all the space in the world to create his patented mid-range jumpers off the bounce. Why exactly? The helpless Atlanta defenders had no choice but to grant Randle a smidgen of space to deter the dribble-drive.

Every great hero has a sidekick competent enough to lead the charge at times, and Barrett is just that. Take the January 4th contest when Barrett was possibly the best player on the court. A 26-point, 11-rebound, and five-assist showing guided New York to a comeback road win. Barrett’s off-ball movement and perimeter shooting prowess stood out and highlighted just how complete a player he is. Barrett devastated the Hawks inside the arc whether he caught defenders ball-watching or calmly pulled up into mid-range jumpers. Although, he did fare poorly from deep on this night: 1-for-5 to be exact.

But this was the only blemish on a fantastic outing that serves as a microcosm of Barrett’s regular-season successes facing the Hawks.

Entering the 2020–21 NBA season, the consensus belief was that the Knicks lacked reliable three-point threats to stretch the defense. The roster certainly didn’t scream shooters galore at first glance. But as is the case with most things in life, there is much more to this group of Knicks than meets the eye, and their collective long-range ability is no exception.

Believe it or not, New York shot the three (39.1%) better than all but two teams in the NBA: the Los Angeles Clippers and Brooklyn Nets, heavyweight title contenders with arguably the most lethal offenses in basketball. The Knicks were exceptionally torrid beyond the arc when dueling the Hawks, as evidenced by their scorching 47.7% clip as a team.

If New York ranked among the very elite in three-point precision, why didn’t their record equate to the Nets and Clippers? The discrepancy in talent level is the clear-cut cause, but another reason is that the Knicks don’t take enough threes. Puzzlingly, the team sits 27th in attempts at 29.7. Considering the fantastic frequency at which the Knicks knockdown looks from distance, it’ll be paramount that their attempts see an uptick in the postseason. Anywhere from the mid-30s to even low 40s would be an ideal range.

For comparison, the Utah Jazz led the way in this statistic with 43 tries per game, so any more than 40ish would be unrealistic.

The Hawks will advance as far as Young can shoulder them this postseason. He is the head of the snake and perhaps the second-deadliest sniper right now behind Stephen Curry. His combination of a quick trigger release, limitless range, and inability to be bothered by contests make him a doozy to contain.

However, the Knicks restricted his three-point lethality as well as any team has, as Young converted just three of his 14 threes against New York, and more importantly, attempted only 3.7 of them on average. How did the Knicks hold a high volume scorer in Young to so few threes? In a few words, aggressive, air-tight traps.

When the Hawks initiated the high pick-and-roll with Young as the ball-handler, coach Tom Thibodeau instructed the guard and big to collapse in on the star and force him to give up the rock. Albeit effective in denying Young airspace to get off a shot, this decision inevitably opened up passing angles, which Young capitalized on in numerous instances throughout the three games. Dishing out a total of 36 dimes, he picked the Knicks apart with his playmaking. But there’s no doubt New York will live with Young piling on the dimes. Thibodeau has long believed in the strategy of forcing the “others,” or the non-stars, to make the winning plays.

Expect Young to attract double-teams early and often for the entirety of this series. Containing Young will be the primary objective for every possession he crosses the half-court marker.

Suppose the Knicks receive a consistent scoring punch from Randle and Barrett, increase the frequency in which they fire up threes, and relentlessly trap Young to mitigate his long-range excellence. In that case, they will have all the ingredients to the recipe for a first-round victory.

»READ: How Tom Thibodeau has evolved his coach since arriving in New York