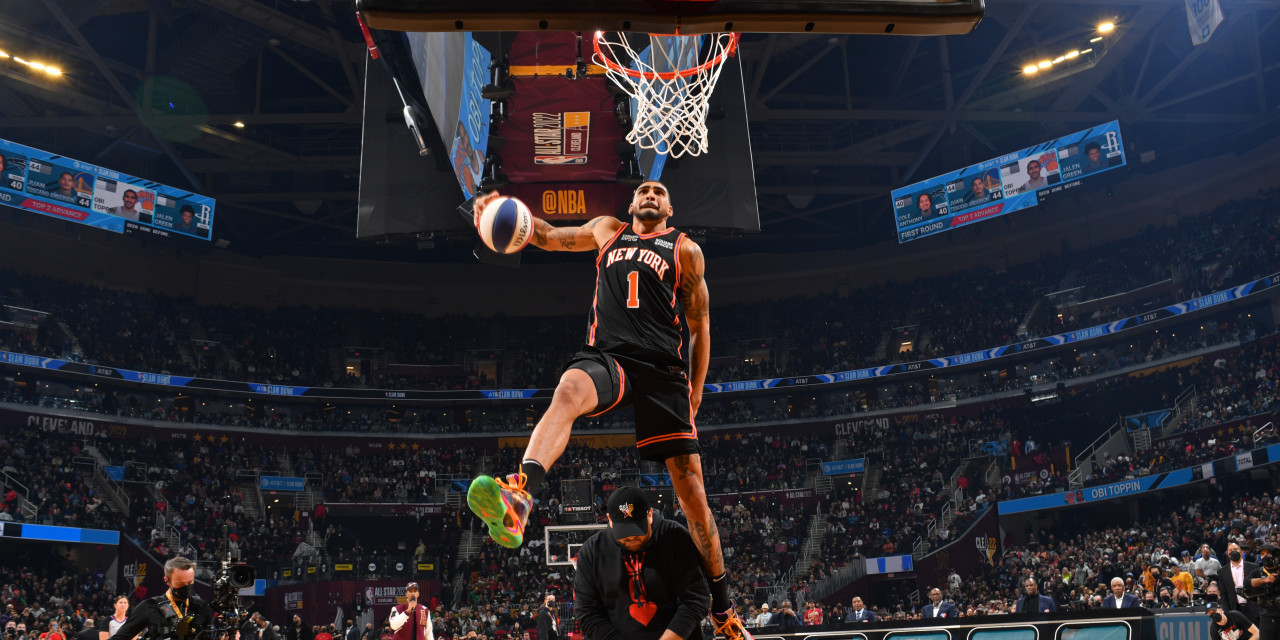 Obi Toppin finally brought something to smile about to New York Knicks fans’ faces as he won the 2022 NBA Slam Dunk Contest at All-Star Weekend in Cleveland on Saturday night.

He had another chance to make a name for himself in the Slam Dunk Contest after being objectively robbed of a title last year.

In 2021, Toppin lost to an almost rim-kissing dunk from Portland Trailer Blazers guard Anfernee Simons. While most of Toppin’s dunks were gravity-defying enough to get him the contest victory, he ended up waning in his finesse as things wound down. His successful slams were highlighted by a jump over teammate Julius Randle and his father, Obadiah Toppin Sr.

He would be the only Knick representing the team in The Land this year as he tried to fend off the likes of Juan Toscano-Anderson, Cole Anthony, and Jalen Green for the trophy.

On his first dunk of the night, he landed a behind-the-back dunk jumping over Chuck Millan after missing his first two attempts at the feat. One attempt landed him in the crowd of photographers, but he ended up finishing up with 44 points in the first round, which tied with Toscano-Anderson.

Toppin went with a classic (well, classic for him) off the glass under the legs dunk that he couldn’t quite flush with gusto. But, he got it on his first attempt which garnered him a score of 46. This was enough to get him to the final round with Juan Toscano-Anderson, who had an impressive between the legs dunk himself to advance alongside the Knicks’ flyer.

After a weak first dunk from Toscano-Anderson, Toppin had an opening to get an advantage with a solid attempt. That he did, as he hit a between the legs dunk once against off the backboard with ease to earn him a 45. It came down to the second attempt to lock things up for Toppin. Simply put, there was no stoppin’ Obi Toppin as he grabbed the hardware and bragging rights with a dunk that bounced off the backboard first before he was able to get it through the net.

OBI TOPPIN’S PLAN B IS BETTER THAN YOUR PLAN A pic.twitter.com/bxOQD16mQ1

It was his first Dunk Contest victory in two tries, and the first win in the event since Nate Robinson brought home the chip in 2010, joining Kenny “Sky” Walker as the third dunk contest champion in Knicks history. While many are considering the 2022 contest as a weak competition, nevertheless, Toppin is bringing home hardware as the only Knick participant during All-Star weekend.