Obi Toppin is More Than Lobs and Breakaway Dunks 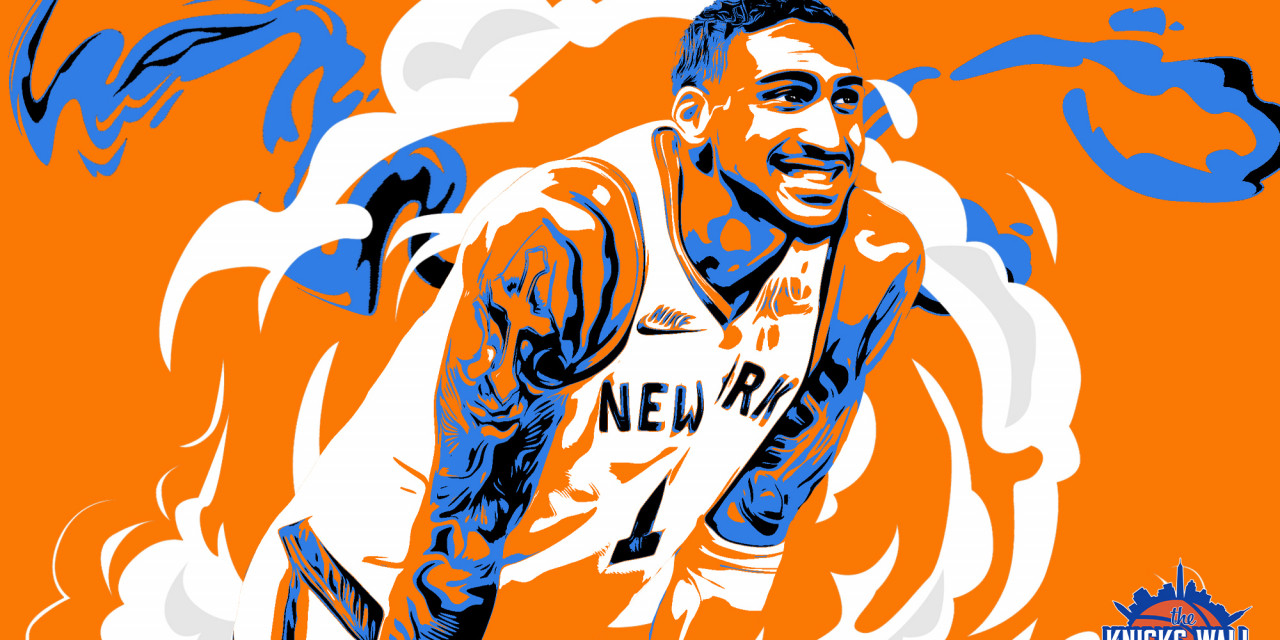 Obi Toppin’s gravity-defying dunks put him on the highlight reels. His energy and grittiness put him in Tom Thibodeau’s rotation.

The first time I saw Obi Toppin play basketball, he wasn’t the best player on the floor. He wasn’t even close, now that I think about it (and look up the game’s box score). I watched his Dayton Flyers take on the Kansas Jayhawks in Hawaii in 2019 on television. Udoka Azubuike scored 29 for the Jayhawks and Devon Dotson poured in 31, shooting 10-of-14 from inside(!!!) the arc. Toppin wasn’t even the high scorer for his team.

If you were to pick two NBA prospects out of the players who appeared in that game, Azubuike and Dotson were decent bets. You wouldn’t have won a dime, though.

I was mesmerized by Toppin from the jump—literally, from the opening tip. And it’s funny, because this lanky man, made up almost entirely of limbs and limbs alone, was wholly ineffective through the game’s first 15 minutes. He entered the game scoring 24.5 points per game during that stretch in Maui, and he failed to score until five minutes remained in the first half. But everything ran through him.

Toppi didn’t even have to touch the ball for him to be involved in his team’s competitive performance through the half; through close-outs, rebounds, tipped balls, and screen assists, he was arguably the game’s most effective player. He finished with 18 points, the second-most of any Flyer in their 90-84 loss, but it was by doing everything else, the little things, that he impacted the game.

I knew he’d be a factor on a pro roster in a matter of years; Dayton was small potatoes when compared to his surf-and-turf-level talent. As they say in the fairy tales, it all felt like just a matter of time.

Obi Toppin is putting on a show! 🍿📸

💥 Threw the ball down like Dwight
💥 180 dunk
💥 Between-the-legs dunk pic.twitter.com/gj6tGSg6W6

He’s done that as a pro, too. A few times, actually. A few times just this season, in fact.

He pulled it off against the Pacers…

… and then gave fans (and NBA Twitter) a shiny present on Christmas Day.

These acrobatic, high-flying jams don’t feel like moves that should feel routine, and yet with Toppin, that’s exactly what they are. They’ve become synonymous with his play. He’s the guy on the Knicks that catches lobs, that always seems to be open ahead of the pack on a fastbreak, that will tuck the ball between his legs before slamming it home if he has enough time to do it. He feels like a perennial Dunk Contest shoo-in (despite his loss to Anfernee Simons last year). He’s slowly becoming the league’s foremost above-the-rim presence. “Obi’s a great athlete,” Tom Thibodeau said earlier this month following Toppin’s slam against the Pacers. “He’s going to make some incredible plays, that’s who he is.”

But everyone knows that there’s more to his game than that. Fans may call for Toppin to receive more minutes because his time on the floor excites them, or fills them with anticipation for whatever he pulls off next, but it isn’t just lobs and breakaways that should get the crowd going. They should cheer when he helps space the floor by drifting to the corner, thus creating space for Immanuel Quickley or RJ Barrett to operate from the free throw line extended. They should leap to their feet when he sprints back on offense in an effort to give his team early options, not just because said early options are often slam dunks. The flashy elements of Toppin’s game are exciting for obvious reasons. But the most obvious things Toppin brings to the table are rarely the most exciting.

Though the second-year forward/big hybrid player is quite possibly one of the most exciting fastbreak talents the league has to offer, it’s his hustle stats that really light a fire under his squad the most. He recovers 54.5% of loose balls that travel his way on offense, a percentage that trails just Barrett (56.5%), Evan Fournier (57.7), Derrick Rose (61.9), and per usual, Julius Randle (62.5), among Knicks who have played more than 150 minutes this season.

Toppin is a constant presence on either end, and that’s not limited to his ability to scramble. It’s due in a great deal to his ability to sprint ahead of the pack, as mentioned earlier. If you remove players who literally played in one game this season, he’s running the fastest out of any Knick on offense, at an average of 4.72 miles per hour. It seems like a silly stat until you take into account that such persistent effort likely (well, definitely) lends to Toppin’s team-leading transition stats. He scores 1.45 points per possession when in transition, finishes 72.1% of his attempts in transition, and is in the NBA’s 92nd percentile in terms of transition performance. If only in this regard, Obi Toppin is elite.

Obi can be in other disciplines, too. I wish he’d get the ball in post-up scenarios more often—like he did when he was at Dayton—because when he does, he’s highly efficient. 1.06 points per possession, placing him in the league’s 77th percentile, to be exact, though his few possessions certainly cause these numbers to appear rather inflated.

Toppin is also the team’s best finisher when in the restricted area at 70.6%, and those numbers aren’t inflated by a lack of attempts in the slightest. He’s fourth on the team in attempts in close per game (3.8) and tied for third in made field goals (2.7). Though his three-point and overall shooting numbers leave plenty to be desired if he aims to become a hybrid big to the complete extent, he’s doing fine thus far simply by doing what he does already. Gravy, the icing on the cake, and the cherry on top can all come later. With his current trajectory, he has time.

When you look at Toppin’s overall progression and the fact that he’s already made significant bounds from year one to year two, there’s almost no telling what he might look like come year five, year seven, year 10. Will he be on the Knicks? That’s up to management and Thibs, and how they want to manage his skill set and inevitably continuous rise. In the past, he has been compared to a bouncier Marcus Morris, Kyle Kuzma, and my personal favorite, Amar’e Stoudemire. Who’s to say he can’t surpass those expectations? Hell, he’s dunking in between his legs more often than I have cereal for breakfast.

But it must be remembered: he’s more than that. There’s a complete player in Obi Toppin, just waiting to be unleashed. It can’t hurt to do so, and the sooner the better for a struggling New York squad.