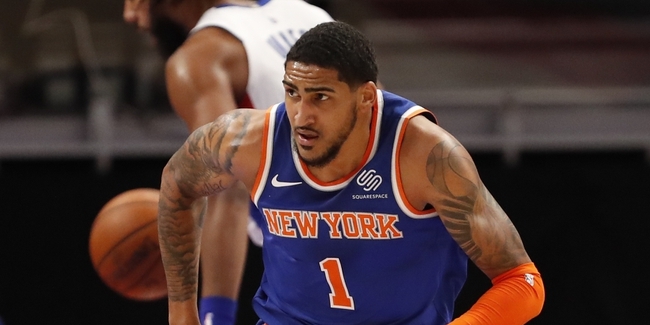 Obi Toppin stood out in his first-ever NBA preseason game as Tom Thibodeau took home his first win* as Knicks had coach against the Pistons.

Tonight’s preseason opener was exactly what you thought it would be: encouraging, cringe, maddening, joyous. The starting lineup was a spacing nightmare with R.J. Barrett smack dab in the middle of it. Barrett is still an enigma on offense. The young kids are more fun to watch than the veterans. This game had it all, and a win to top it off.

The first three minutes of the game looked exactly what you would think two teams that have not played a game in nine months would look like. Barrett forced the action early and often—and missing early and often. The rising Canadian sophomore missed his first five shots from the field. The starting unit as a whole shot 29.4% from the field in their first run of the season.

Thankfully, the bench mob salvaged the quarter. Dennis Smith Jr. and Mitchell Robinson were first two off the bench, with the much anticipated debut of Obi Toppin coming moments late with about four minutes to play in the first, followed by Frank Ntilikina and Kevin Knox. Toppin in particular came out with a lot of energy and scored a quick six points. Ntilikina and Knox added a couple jumpers to get the Knicks a 22-18 lead after one.

The second quarter got off to a nice start with Toppin providing most of the entertainment. Once the starters returned, things slowed down again. Barrett continued to craft his brick house as points became tough to come by again. For context of how rough the first half was overall, Nerlens Noel went into halftime tied for the game-high lead in scoring with 10 points.

Tom Thibodeau, New York’s new head coach, had his first of many angry timeouts early in the third quarter following a poor sequence from the starting lineup. The timeout ended up being the key shift in momentum that allowed the Knicks’ lead to ballon as much as 18.

The Knicks straightened up on defense and made the Pistons grind for every point the rest of the quarter. Elfrid Payton dunked on Mason Plumlee’s head; Barrett moved his offense inside the arc and shot 6-of-8 from the field; Mitch was back to being a havoc on defense; and Smith looked confident shooting a three. It all culminated in the best quarter of the game.

Defense was the closer for the Knicks on this night. The Pistons had a mini, Knicksian even, comeback, the starting unit continued to starve for offense, but in the end New York made more plays on defense to hold on. Noel and Robinson were both great in particular with two blocks a piece. Robinson added four steals, gobbling up a couple alley attempts.

Overall not the worst way to welcome the Knicks back after such a long layoff. Thibodeau’s imprint is clearly on this team already, which for better or worse is a vast improvement over the last regime. Knicks win, 90-84.

If Tom Thibodeau’s plan was to use Obi Toppin as a sparkplug in an inevitable sluggish opener, it worked masterfully.

Toppin burst into the game with a quick six points in the first quarter and did not tail off to start the second. Toppin hauled in five quick boards, notched his first dunk as a Knick and never stopped moving. He was far and away the best thing about the first half, with nine points and five rebounds in his first ten minutes as a Knick.

The second half was less noteworthy, but the debut overall was all you wanted from a rookie debut—11 points, seven rebounds, one block, and one assist. He showed that he could handle the ball a little bit (with a heavy emphasis on little) and has an offensive game ready to make an immediate impact.

His constant movement is what is most impressive. Good things happen when you are active, and that was the case with Toppin tonight. The next step is moving his offense out of the paint and cutting down on the crosscourt whip passes.

Yes, it’s only preseason and yes Barrett is in the same exact spacing nightmare he was nine months ago. Still, his jumper looked horrific in the first half. Wide open, contested, it didn’t matter. He eventually hit a nice fader in the paint, but there is no rhyme or reason to Barrett hitting a jumper. Nothing looks off mechanically, yet he airballed a couple three-point attempts. He finished the first half 2-of-10 shooting.

Thankfully he started the second half with a nice pull up jumper just above the free throw line. That set the stage for a much better second half, going 6-for-8 in the third quarter as he shifted his offense inside the arc.

He finished with 15 points on 7-for-16 (0-for-4 from three), but it appears the shooting woes and concerns from last season will not be going away anytime soon. Although, I should note, no headband tonight.

I wanted to have Obi Toppin’s first dunk but in fairness, Payton earned this one and is now Mason Plumlee’s godfather.

The Knicks play the Pistons again in Detroit in two days.