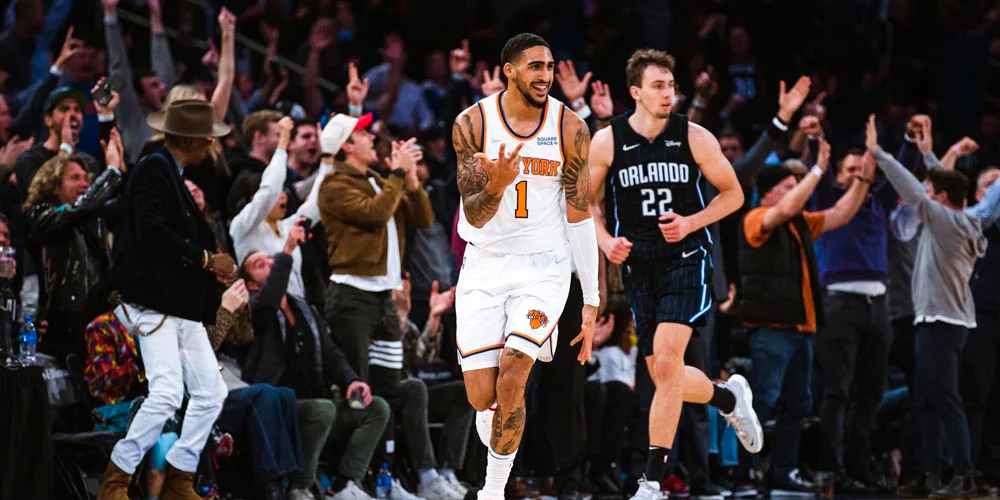 As the Knicks dropped their second of three games to the Orlando Magic so far this season, Obi Toppin made another plea as to why he’s owed a bigger role on this team.

NEW YORK, N.Y. — The New York Knicks dropped to 3-6 in November with their loss to the Orlando Magic tonight and clearly have some soul searching to do if they want to right the ship. When it comes to rotations, it may be time to give more notice to second-year player Obi Toppin.

Toppin tied his career-best in scoring tonight, putting up 14 points to go along with five rebounds, two assists, and a block. He had a team-high +11 in his minutes played and was an integral figure when they briefly took the lead back in the fourth quarter.

“He just brings energy, that’s what he does,” said head coach Tom Thibodeau about Toppin’s play tonight. “Were looking for energy off the bench. Be consistent, you’ve gotta play defense, you’ve gotta rebound the ball, you’ve gotta be able to guard late in the game. We had the lead, but we didn’t close it out.”

Toppin scored eight of his 14 points in the fourth quarter and totaled over 17 minutes of playing time on the night. He averages about 15 minutes played per game, so he saw a slight uptick tonight. Most notably, Toppin played from the beginning of the fourth quarter all the way down to the two-minute mark.

Toppin, who had also been struggling with his three-point shot this season, made two of his attempts from there in the fourth quarter. Prior to tonight, he had only made one three-pointer on the season. If he can hit these at a consistent clip, it would only be an addition to his effective bully-and-bounce game in the paint.

When talking about any possible tweaks to the rotation and the normal minutes being handed out, Thibodeau said it’s certainly to be taken under consideration given the bench’s play as of late. They’ve been staying in games later and later into the fourth quarter as they have often outplayed the starters on the court.

“Sometimes the tough thing is trying to figure out who’s going well, and that’s one thing. But we’re capable of doing better,” said Thibodeau. “The only way out is we’ve gotta work our way out of this.”

The Knicks will look to get right at home against the Houston Rockets this Saturday, as they now hold a 3-5 record at Madison Square Garden.